The sport of legends Muhammad Ali and Amir Khan, is being hijacked this weekend at the world-famous Caesars Nightclub venue at Streatham in South London. This coming Sunday, the 28th February 2010, a team of eight fascist-friendly semi-professional English boxers will supporting the neo-Nazi EDL, entering a boxing ring displaying EDL logo shorts and flags for an official EBC prizefighter contest. 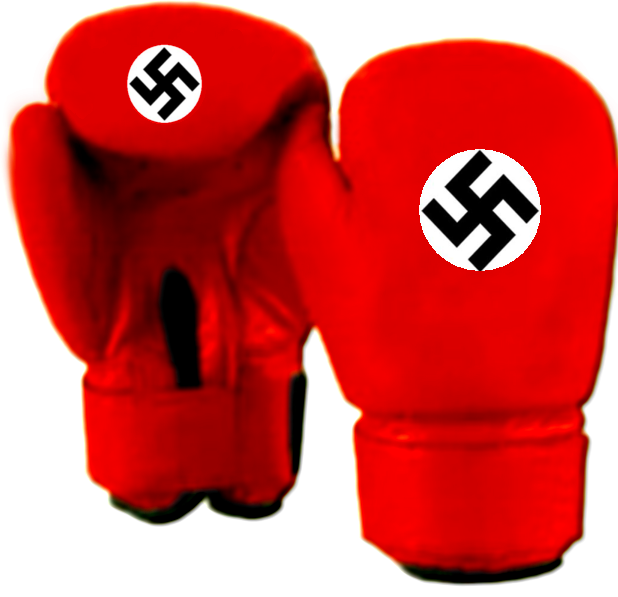 This far right boxing night promoted in conjunction with Mean Machine Promotions, in the nation's capital, is designed to raise the profile of the cowardly racist political organisation whose last rally in England involved storming through a predominantly Asian area of Stoke, smashing up cars, windows and passers-by in what has been described by onlookers as an anti-Muslim pogrom.

Rather than being being a cage-fighting event in a derelect warehouse akin to criminal hoodlums, the EDL's event is being held in one of London's most famous boxing venues, Caesars, advertised as "London's largest and most luxurious nightclub", and is sanctioned by the European Boxing Council (EBC).

Caesars is indeed a celebrity-frequented venue, and not some backstreet dive, all the more shocking when you consider that the BNP have to make do with the less than glorious surroundings of the New Kimberley Hotel for their shenanigans.

On their social networking web pages, self-confessed boxing fan and psychotic fascist thug Liam Pinkham devotes plenty of space to the merits of his "Great White (Supremacist) Hopes" of boxing, aiming to prove to the world that Aryans pack the best punch. Following the EDL's showcase sporting event, Caesars are laying on an "exclusive afterparty" where hardcore neo-Nazis Pinkham and steroidal busom buddy Wigan Mike can chase around siliconised Page Three models all night long, demonstrating the pro-active feminism of the EDL.

Over forty EDL members have already bought tickets. Tickets for the "Fumble For The Fatherland" are being sold on Ebay through the EDL's "merchandise shop" alongside their paramilitary hoodies and assorted nationalist and racist tat at £45 each, as well as other outlets.

(Like their "multiracial nationalist" idol Nick Griffin in the BNP, the EDL seem happy to rip off their own members by charging £5 for postage per ticket).

From Bolton to Sheffield, Cardiff to Brixton, boxing gyms all across the country pride themselves in offering sports and fitness training to young people from under priviledged backgrounds. Go in any inner city gym, and you will see black, Asian and white kids training together with mutual respect and admiration. The ethos of equal competition is one sadly lacking in most other sports, and for that reason, boxing is part of the government's sports development strategy to coincide with the forthcoming 2012 London Olympics.

Despite the EDL's recent setbacks, organised racism and religious hatred is steadily increasing year-in, year-out with the spirit of fervent Islamophobia fostered by politicians, state institutions and the scaremongering tabloid media who worryingly have turned their attentions from hooked-handed foreign bogeymen to British Muslims (the "enemy within"), to shore-up public support for the War On Terror and silence critics of an extremely unpopular and bloody Afgan war with casualties on all sides.

It is the misguided belief fostered by the rightwing newspaper industry and black ops foreign office "leaks" (the whole of the Taliban have Brummie accents) that has created the environment for a resurgence of the British far right exploited by violent neo-Nazi groups such as the EDL.

Egotist and publicity whore of the EDL Trevor Kelway sees mileage in turning media attentions from race riots to ringside aggression. Eight shameless racist boxers will be taking to the ring this Sunday in London for what the EDL leadership see as both a moneymaking opportunity and a cynical PR exercise, a chance to appeal to a wider fan base who might not otherwise warm to their hardcore Hitler loving British Freedom Fighters or the EDL's violently destructive racial football hooliganism.

Whilst a handful of potential boxing starlets of tomorrow fritter away hopes of fame and fortune through mutual association with English fascism, sweating tears of endurance as lackeys for an Islamophobic masterplan, spare a thought for Alan Lake and the EDL's other weathly far right backers who will be sipping extravagantly on champage on ice, playing millionairre war games with people's minds while the cancer of organised racism takes a foothold within the grassroots sporting world.

Since the defeat in the rematch of Max Schmeling by Joe Louis (Schmeling himself refusing to join the Nazi party or sack his American Jewish manager, and hiding two Jewish boys in his apartment during the Kristallnacht pogrom), with the rise of Jewish, black and Asian ring fighters, boxing has had an estranged relationship with fascism, and may seem like an unlikely target for the EDL.

Since the New Millenium, the Lonsdale boxing brand became momentarily popular with the European far right in the Netherlands, Belgium, northern France and Germany, especially because a carefully placed outer jacket leaves the letters NSDA showing; an acronym of Nationalsozialistische Deutsche Arbeiter (National Socialist German Worker), and one letter short of NSDAP, the German acronym for the Nazi Party, however the boxing world has generally embraced non-white people and immigrants (including Muslims) into its gymnasiums, alongside the white working class.

One thing's for sure, the undeniable patriotism and steadfast patriotism of Amir Khan who dedicated his victories after 7/7 to the victims of Islamic terror, will be affronted by the poisonous bile and misdeeds of the EDL, who, despite claims of being "only against religious extremism", regularly create disorder, race hatred and chaos in the city centres of England, Wales and Scotland with straight-armed Hitler salutes, banners calling for the banning of mosques, incessant racist chanting, and behind the scenes, plotting deadly large-scale race riots.

Whatever are one's personal thoughts regarding boxing, with the Olympics approaching, it is important that anti-fascists everywhere show our massed opposition to hate-peddling British fascist bootboys infiltrating the corporate sporting world.

You can register your disapproval of the EDL hijacking boxing by contacting the venue direct and asking them to cancel the Prizefighter event (please be polite and courteous in all correspondance!!! Thanks!):

NO PASARAN IN SPORT!