Made in Cumbria - now funded by the nuclear and arms industry

Made in Cumbria members learnt on Monday by email that they will be funded
wholly by the nuclear and the arms trade industry. Made in Cumbria was
established in 1989 as an economic development initiative by Cumbria
County Council to promote the sales of crafts, gifts and local foods. 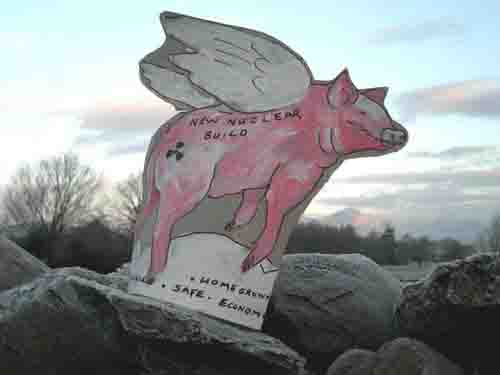 The nuclear industry's tentacles are securing an ever tighter grip on
Lakeland -
now Made in Cumbria has succumbed and has been handed over from County
Council ownership to the tender care of Sellafield Ltd and BAE Systems
who wholly fund the Cumbria Chamber of Commerce. While Sellafield Ltd
and the nuclear industry has the funds to buy passive acceptance - it does
not have the wherewithal to cover its own public liability insurance
regarding the High Level Waste tanks. The hazard is so great that no
insurance company would be able to provide cover. Nuclear insurance
subsidy is a bigger scandal than MPs expenses and Radiation Free Lakeland
have written to Tim Farron asking him to support a Parliamentary Motion
calling for an end to nuclear subsidies.

The motion EDM 866 from Paul Flynn, the MP for Newport West, states that the
nuclear industry insists it is looking for "no subsidies for any new
nuclear plants they may build in Britain; believes that comments by such
chief executives are disingenuous and misleading because many nuclear
subsidies paid for by British taxpayers are already in place, including
the multi-billion pound underwriting of insurance liabilities.."

As a working wildlife artist Marianne Birkby has been a long time member
of Made in Cumbria who have provided a good service to members.

" I am appalled to be an involuntary part of an organisation funded by
the nuclear and arms industry. Made in Cumbria funding should come
directly from central/local government not taxpayers money filtered
through the nuclear industry in a bid to buy passive acceptance. I won't be renewing my
membership when it runs out".