After an air strike that killed many kids in the beginning of 2010, shouts of ‘Death to America’ and to ‘the Afghan government’ could be heard throughout Afghan villages and perhaps in other Muslim communities around the world. Those local, regional and global anti-American, anti-NATO, and anti-Afghan government sentiments will only be more widespread and vicious now that a UN report found that some 346 children were killed in Afghanistan in 2009. 131 of those kids were killed in NATO air strikes. 22 more were killed in nighttime raids. And in the last few weeks alone, up to 50 civilians have been murdered. In essence, there have been more and more civilian casualties as the US/NATO forces attempt to ‘liberate’ the Afghan people. More are likely to come as well. 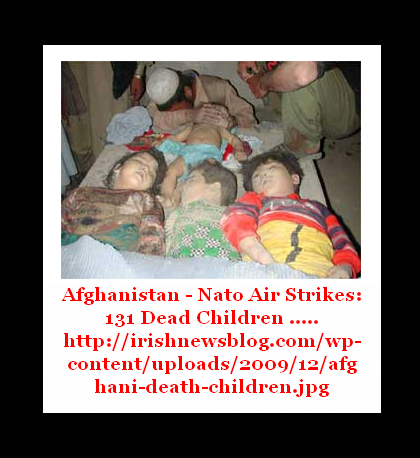 In a briefing to the UN Security Council, the head of the UN mission to Afghanistan explained that ‘what affects one individual in a village affects all… the military surge will make it more difficult’. As civilians are murdered in cold blood, as family members and friends are lost for no clear reason, more civilians will join the ranks of the Taliban and sympathize more with the extremist movement of al-Qaeda. Yet McChrystal remains convinced that a surge of thousands and thousands of troops can help win ‘the hearts of minds’ of the Afghan people? What planet am I on again? This is Earth, right? When did reciprocating violence with violence do anybody any good?

2009 was the deadliest year to date since the Afghan War began in 2001, with 2,400 civilians murdered. These figures make McChrystal’s goals of ‘protecting civilians’ all the more preposterous. At which point do the Afghan people become fed up with McChrystal’s apologies and turn their backs on ‘American benevolence’? How many times can the US/NATO forces pull the ‘mistake’ card as a ‘legitimate’ reason for the killing of women and kids?

And McChrystal is not the only foreigner in Afghanistan that releases pathetic, apologetic statements that do nothing to ease the pain of losing loved ones. ’I am deeply saddened at the reports of the terrible loss of civilian life on Sunday in southern Afghanistan’, said Robert Watkins, Deputy Special Representative of the Secretary-General for Afghanistan. Is Watkins saddened that innocent kids and women who he knew nothing of were lost, or is he upset that civilian deaths make the US/NATO operation more difficult, a reality that will ultimately lead to more NATO deaths and war opposition back home?

It is quite disgusting that the US/NATO forces excuse the murder of kids as the ‘unfortunate circumstances of war’. Other excuses like ’self-defense’ are also used to prove these barbaric acts. Really? Self-defense against kids?

Even more ridiculous is the coverage of the war in the mainstream American newspapers, like the Washington Post, which run articles with titles like ‘Finally, a glimmer of hope for the US in Afghan War’. Mr. Reid, the author of the article, must be on some far away planet or drugged up on ecstasy. Firstly, he argues that capturing Taliban commanders is a victory for US/NATO operations. But it was McChrystal himself who said that ‘almost any leader can be replaced’. This is true. The US/NATO operation continues to attack the symptom and not the problem. Secondly, Mr. Reid must not be following the civilian death toll and the reports coming from the region of how catastrophic they are ‘to winning hearts and minds’. Mr. Reid – STOP DRINKING THE ESTABLISHMENT COOL AID!

Even Defense Secretary Gates provides unbelievable rhetoric when he says ‘the situation is no longer deteriorating’. To assess that statement we need to measure what the ’situation’ is anyways. What is the situation? It is a mind blowing question that nobody has the answer to. What does victory look like? What is the goal of the war? Does anybody really know?

If the plan is to kill hundreds of kids, exploit Afghanistan’s gas resources, prop-up a corrupt ‘democratic’ government, and to extend the American Empire through the multi-national, American dominated corporations plundering Afghanistan, consider the US/NATO well on its way to victory. If these are the goals, Gates and McChrystal should already be given a massive trophy with a small plaque reading ‘Victors of the Afghan War and the ‘Liberators’ of the Afghan people’.
-