The prosecution led the days argument they claimed by causing over a quarter of a million pounds worth of damage to EDO/ITT we in no way could have saved lives in the occupied territories. This therefore meant we had no right to a jury trial. The judge then asked the prosecution to provide evidence to substantiate such a claim, the prosecution had nothing to show.

The defence then came back to say there were two linked issues that required consideration.
i) The circumstances in which a judge may withdraw a defendant’s defence;
ii) Whether the facts relied on by the defendants’ amounts to a defence in law.

The points of law up for scrutiny were from the: 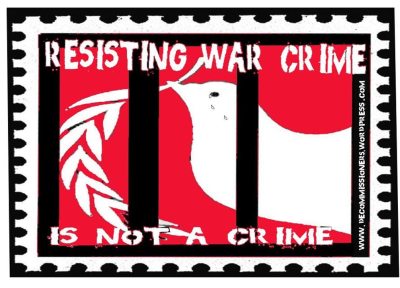 resisting war crimes is not a crime

Judge Kemp returned in the afternoon with the court’s finding and took a favourable decision for the decommissioners. The issues raised by the defence, on all three points of Law, should be decided by a jury and not a judge. The prosecution then asked the judge if they were allowed to appeal, the judge refused although this confusingly still leaves the door open to the court of appeal.

It is anticipated that the prosecution will go to the court appeal to challenge at-least one if not all three of the decommissioners defences. They have a week in which to do this if they so wish.

Elijah Smith Was Moved Back To Lewes Prison

For those who can visit, times are 2pm-4pm daily