Welsh Refugee Council today called on UKBA and Cardiff Council to act quickly to release Mashal Jabari, 14 years of age, from Campsfield Immigration Removal Centre, and to suspend removal directions until a full assessment of his age can be made. Welsh Refugee Council does not normally comment on individual cases, but in this instance believes that there are compelling compassionate grounds why this boy should be allowed to remain in the UK. 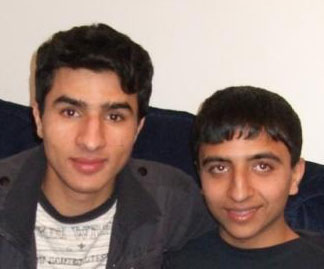 Zaki Jabar, aged 15, arrived in the UK alone and extremely traumatised in November 2008. He came from Afghanistan and when he left his father was missing presumed dead and his mother was sick. His family had been attacked after his father had given assistance to the American forces, and Zaki had seen his sister killed. He was placed in foster care in Leicester by Rutland Social Services and given Refugee Status. He is currently sitting his GCSEs. He was anxious to trace his younger brother Mashal.

Mashal Jabari arrived in the UK in October last year, and claimed asylum on arrival. By then he knew that both his parents were dead. He was assessed as being over 18 even though he said he was 14. He was sent to Cardiff where he was initially placed in the hostel for adult new arrivals. He was refused asylum in November. Welsh Refugee Council staff working in the hostel, who have now known Mashal for 4 months, have been extremely concerned because he seemed so clearly to be 14 rather than 18 and because he has been depressed and suicidal at the fear of being sent home to Afghanistan.

Mashal's GP has stated in writing that Marshal appears to be under 18. Social workers in Cardiff are on record as saying that they think Mashal is under 18 following an initial assessment, but they have not carried out a full age assessment and so it has not been possible to persuade the Border Agency of his age.

Mashal said he had an older brother called Zaki who was also somewhere in the UK. Eventually, through a chance encounter, it has been possible for the 2 brothers to be reunited - they met last month in Leicester. Photos of the meeting show them with their arms around each other - Zaki the tall broad shouldered one, Mashal the small, boyish one.

On Monday, Mashal went to the Border Agency office in Cardiff with documents from his brother, asking for his case to be reassessed because his brother has been given Refugee Status. He was taken into detention - he spent yesterday in a Police Cell and has now been sent to Campsfield detention centre. He has a removal date of March 9th. Our Children's Advocacy Officer visited him in Cardiff Bay Police Station and he was distraught beyond description. He had been put in padded clothing for fear of self-harm.

'This is an extremely distressing case. Welsh Refugee Council is very concerned about the welfare of Mashal, who is already traumatized by his experiences in Afghanistan. We call on UKBA to release him from detention and to recognize him as a child not an adult. Cardiff Social Services should conduct a full assessment of his age and needs. We also ask UKBA to recognize the compelling compassionate grounds for allowing him to stay in the UK and remain in touch with his brother.'

Commenting on the situation, Zaki said:

'I just want my brother'.

What You Can do to Help:
Email/Fax/Pone: Rt. Hon Alan Johnson, MP, Secretary of State for the Home Office, requesting that Mashal Jabari is immediately released from Campsfied IRC and returned to his Cardiff community.

Model letter attached , which you can copy/amend/write your own version.


Notes:
Welsh Refugee Council can provide further information and photographs on request.
Both of the boys have given Welsh Refugee Council consent to publicise their case.
The slight difference is spelling of surnames (Jabar, Jabari) has arisen due to differing translations of the surname from Pashtu.