More than 50 people protested at Holloway Prison on Wednesday evening against the holding of five women from Yarl's Wood immigration detention centre without trial or charge and to support the women at Yarl's Wood in the fourth week of their hunger strike against the degrading conditions and inhumane treatment there. Photographs Copyright (C) Peter Marshall, 2010. All rights reserved. 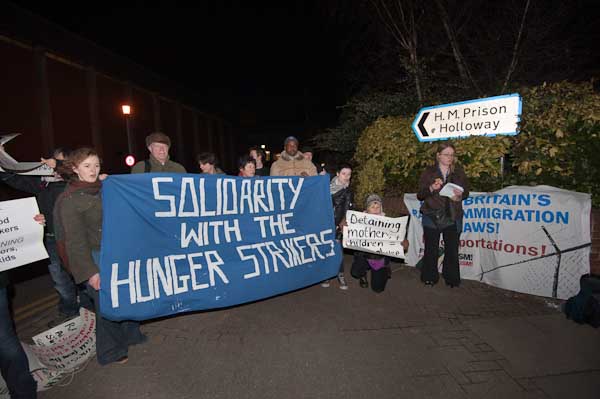 Solidarity With The Hunger Strikers 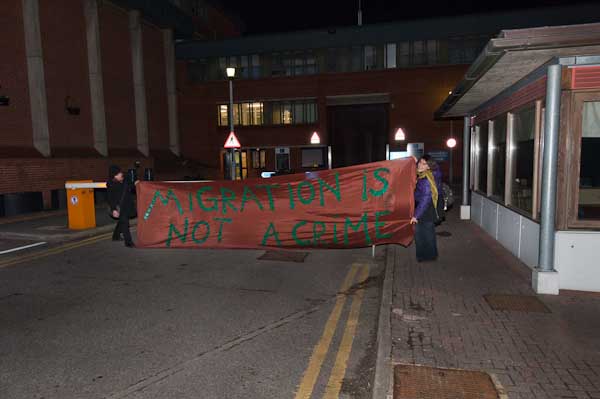 Migration Is Not A Crime 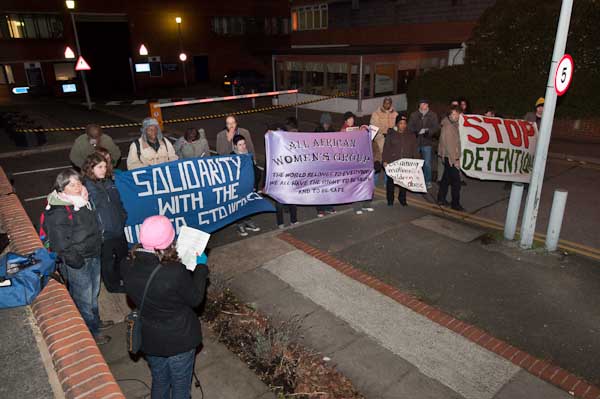 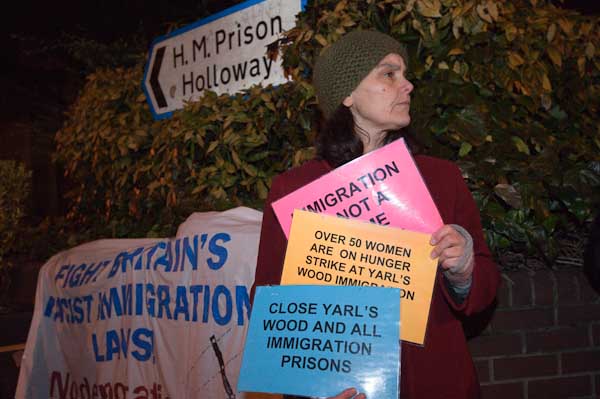 On the Main Road 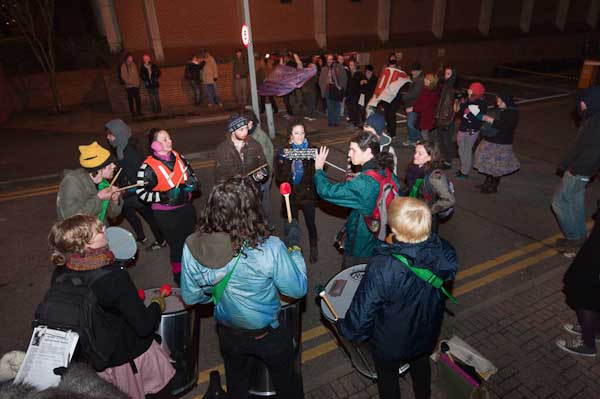 On Tuesday this week, the 19 women at Yarl's Wood confirmed that they were still continuing their hunger strike. They have reacted angrily to statements by Home Office Minister Meg Hillier that the women refusing food were buying food from the shop in the centre and getting it from visitors. As well as denying the claims they have also pointed out that visitors are not permitted to bring food into the centre.

The protesters also called for an end to the use of detention and in particular for the detention of women with children which amounts to child abuse. They also want SERCO guards at the centre to be prosecuted for their racist and sexual abuse.

The loud chanting and samba band will have made the protest and its message of support heard to the women held inside the jail, and certainly a little jumping up and down with the music helped make those taking part outside a little less frozen in the chill wind.

The protesters blocked the vehicle entrance to the prison, and one SERCO prison van that arrived during the demonstration quickly backed out of the driveway and went away. A van full of police also arrived and came and asked a few of the demonstrators what was going on, and then stayed to watch but made no attempt to move the demonstrators while I was there, though after half an hour or so an officer did remove a 'incident tape' that had been stretched across the prison entrance.

The Home Office and SERCO have also issued denials of the allegations of violent attacks, beatings, victimisation and abuse at the centre, but as well as the many consistent allegations made by over 50 women in the centre, there are also mobile phone images of some of the injuries, and women who have been released since the main incident have given interviews.

Journalists and MPs have been asking questions about the mistreatment of detainees at the centre, and lawyers have attempted to challenge the treatment of detainees as a breach of their human rights under European Convention articles 3,5 and 8. Certainly many of those who have seen the system, either as detainees or visitors - even on carefully conducted tours - have been scandalized by what they have seen. We should be treating these people, many of whom have fled from traumatic situations in their own countries in a far more humane fashion.

Some more detailed information about the 5 women in prison is posted on the Brighton No Borders blog:

http://nobordersbrighton.blogspot.com/2010/03/more-yarls-wood-news.html
One of the women has been kept in isolation for 23 days and two are in HMP Bronzefield rather than in Holloway.

A few more pictures on Demotix:

and shortly on My London Diary