Students at Sussex University came into violent conflict with riot cops on Wednesday (3rd) as they occupied the executive nerve centre of their university. Several weeks in the planning by Stop the Cuts campaign, around 80 students rushed the 'fortified' Sussex House building with a supporting demo outside of around 300 people, all in protest against the proposed cuts to university funding. The occupation was part of a national day of action, called against £950m of government cuts to higher education announced on February 1st. There were also actions in Norwich, Leeds and London. 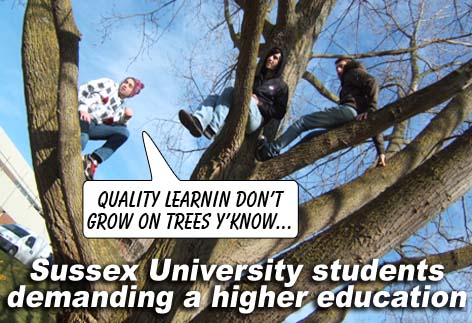 The day started at 12pm with an anti-cuts carnival in the main square of the campus, with demonstrators togged up in animal masks – a nod to the last occupation of Sussex House after which senior management branded students as behaving like 'animals' (an occupation which also lead to Sussex house being made 'occupation proof' with a multitude of complex security systems). Students then rushed the building, managing to occupy the floor that had all of the Vice Chancellor Executive Group offices.

Cops arrived on the scene within 15 minutes, complete with dogs, riot gear and an Evidence Gathering unit. Cue a mad rush of bodies, and police ended up being kept at bay with critical mass. In the words of one participant, “F*cking hell – it's all batons and dogs here”.

Inside, most staff left of their own accord, although the Head of Security, Roger Morgan (named by our source as a “complete c**t”) and another uni bigwig locked themselves in an office and refused to leave without a police escort as they were 'too intimidated' to leave (as opposed to administrators and secretaries who seemed fully able to muster the courage to walk down a flight of stairs).

While this was going on protesters managed to find some very juicy documents including some dodgy expense records (like a £75 dinner and holiday flight for an execs' wives and an £1800 hotel bill), and a letter from Peter Mandelson to the Vice Chancellor about the rise of 'domestic extremism' in the university. Copies have been taken and should be released into the public domain soon.

Halfway through the occupation activists attempted to rush the building and break through the lines of police – an action that resulted in batons being pulled out and things turning nasty – two arrests were made on suspicion of assaulting a police officer and both are still custody.

After the failed rush, a vote was held inside the building about whether the occupiers should continue or leave voluntarily, resulting in a majority ballot to go whilst still having the upper hand. The SWP opened the doors and the students left.

The demo was held in solidarity with ATL (Teachers' and Lecturers' Union) that had voted in favour of strike action the same day. One source called the action he had seen “the most effective bit of direct action seen on campus”.

Current plans by University senior management include massive job losses and entire areas are facing the axe, despite committing themselves to spending £112 million on new buildings (not to mention pay hikes for the senior management). The university found itself with a £3 million shortfall, which it is trying to rectify by wildly slashing any area of the university that doesn't fit with its 'New Strategic Vision.'

Respected academics are facing forced redundancy, successful degree courses are due to be arbitrarily cancelled if management gets its way. The history department is being 'made more popular' as the process has been euphemistically described by management blurb. This means cutting all European/world history before 1900, and all British history pre-1700, with several redundancies. The children's crèche, which had been recently rated in an Ofsted inspection as 'outstanding' and currently serves the needs of 62 kids. The university reckons it can save £5million with this act of kiddie (service) snatching. Meanwhile degrees in Human Sciences are set to go, and modern languages, engineering, and linguistics are all under threat. Nearly half the informatics dept is set to go, with 14 redundancies in the pipeline. The sexual health centre UNISEX set to go too.

The university, which went on an unsustainable, reckless spending binge during the boom times when rich foreign students were flocking to Blighty to study and government subsidies to higher education seemed unending, has found itself shackled with PFI deals. Rather than respond rationally, it appears that the management has just taken a look at any course that has been perceived to be less profitable and taken the knife to them. It's worth noting that neighbouring Brighton University (hardly a hotbed of firebrand radicalism) which has traditionally underspent and not been quite so keen on the latest corporate faddishness, isn't planning any job losses or major cuts.

*As well as action in Sussex, students from the University of Westminster stormed the boardroom of their uni on Monday (1st) and confronted their Vice Chancellor, Geoffrey Pett, about the proposed 10% cuts in jobs. After receiving unsatisfactory answers, they occupied the Vice Chancellor's office to protest against the increasing fees and hefty management salaries, while teaching time decreases and class size grows by the term.

*See Indymedia London for more info on the Westminster occupation

*To show solidarity with the teachers and lecturers currently facing hefty job cuts, join the March for Jobs this Saturday (6th) in Brighton. Meet at The Level at 12pm.

Around 300 students have occupied a lecture theatre at Sussex University in a show of defiance against university management. It is the third time this year that the university has been occupied by students in protest at planned cuts.

The occupation started after a demonstration demanding that six students suspended for taking part in a peaceful sit-in last Wednesday be immediately reinstated. It comes in spite of a High Court injunction taken out by the university in a bid to stop sit-in protests.

University management have responded by posting a statement on their website saying that the suspended students would be allowed to resume their studies — an announcement that was met with a loud cheer inside the occupation. But according to the statement the students would still be barred from taking part in “activities on campus that are unconnected with their studies”.

Students in the occupation are currently discussing their response to University management. It is understood that the students have arranged for a lecture due to start at 4pm to be relocated to another vacant lecture theatre on campus.

Students are posting updates from the occupation using the #savesussex tag on Twitter.

We, the students of the Stop the Cuts campaign, have assembled in Arts A2, in response to the actions of the management, specifically the arbitrary suspension and exclusion of 6 students by the Vice Chancellor last week. These students were not violent, and the demonstration in no way merited the presence of riot police on campus. There has been a widespread response from both outside and inside the university condemning this action as disproportionate. These students are part of a wider campaign involving hundreds of students and workers, which continues to be against the compulsory redundancies of staff at Sussex, and to defend public services nationally.

In order to leave here today, our demands are:
1. The unconditional reinstatement of the six students who were suspended and excluded last week – the terms outlined in the statement on Sussex Direct today were not good enough.
2. No disciplinary action against anyone in the room.
3. No punishment of non-violent dissent, no criminalisation of any form of non-violent protest, demonstrations or occupations.

The students of the Stop the Cuts campaign

At 14:30 today 300 students and staff occupied the Lecture theatre Arts A2 in defiance of the high court injunction placed upon all persons entering or remaining on Sussex Campus and involved in the vaguely defined act of ‘occupational protest’.

The occupation is in protest against the suspension and exclusion of six students involved in the previous occupation of Sussex House calling for their unconditional reinstatement. We, the occupiers, stand in solidarity with all staff and workers facing compulsory redundancy, and all other areas on campus affected by the devestating cuts implemented by management.

We, the occupiers, have unanimously decided to remain until our demands are met. Until they are met this space will be open to all students and workers. We will use it for educational lectures, talks, critical debates, film screenings and to create an environment where the university community can come together to educate one another in an environment determined by us and for us.

We call upon students, workers and the wider community, locally, nationally, globally, to join us in the fight against educational cuts, job losses and the cuts in the public and private sectors. Strike! Occupy! Resist!

The room is being occupied overnight, with activities planned throughout the day tomorrow.