Just over 30 Kurds demonstrated opposite the Syrian Embassy in Belgrave Square, London this afternoon, Friday 12 March 2010 on the sixth anniversary of the start of the Qamlishi Uprising in Northern Syria on 12 March 2004. 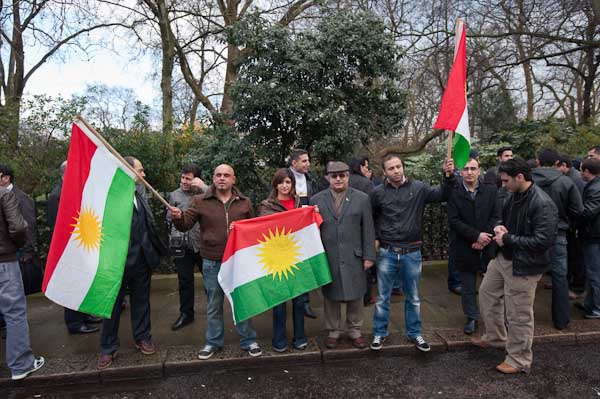 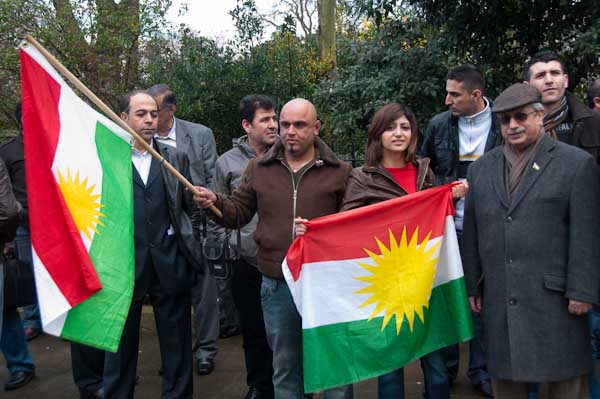 The 'Qamlishi Uprising’ (also known as the Western Kurdistan Uprising) began during a football match in that city in northern Syria where supporters waved Kurdish flags on 12 March 2004 and rapidly spread to other Kurdish towns close to the Turkish border as well as Damascus and Aleppo which also have significant Kurdish populations. At least 30 were killed and over 160 injured as Syrian forces brutally suppressed the uprising.

Al Qamlishi (Qamislo to Kurds) is on the border with Turkey and also close to Iraq; Kurds form the largest ethnic group there, along with Arabs, Assyrians, Armenians and others, and the city is sometimes regarded as the Kurdish capital. It is in the area Kurds designate as Western Kurdistan and there is a ‘Western Kurdistan Government in Exile’ under its president Dr Jawad Mella, also president of the Kurdistan National Congress, based in west London.

The protesters displayed the national flag of Kurdistan with its red white and green stripes and the 21 ray yellow sun introduced in the early years of the last century during the independence struggle against the Ottoman Empire and adopted as the official flag by the first Kurdish Government in Exile in 1927, the short-lived Republic of Kurdistan in 1946 and subsequently by the Kurdistan National Congress.

Recently Qamlishi has gained in economic importance as oil has been discovered in the region around 50 miles from the city. Unrest has continued there, and in March 2008, Syrian forces opened fire on Kurds who were celebrating the Kurdish New Year (Newroz) and killed three people.

Kurds are the largest ethnic minority in Syria, and the government has tried hard to suppress their ethnic identity, including banning the use of the Kurdish language, and denying many Kurds citizenship leaving them without rights.