Biofuel power company Blue National Grid attempted to scupper biofuel campaigner’s chances of winning the Southall Appeal by getting all evidence associated with deforestation, climate change and human rights abuses disqualified from the Hearing. But campaigners may still win the day as air pollution associated with burning biofuels begins to prove intractable. 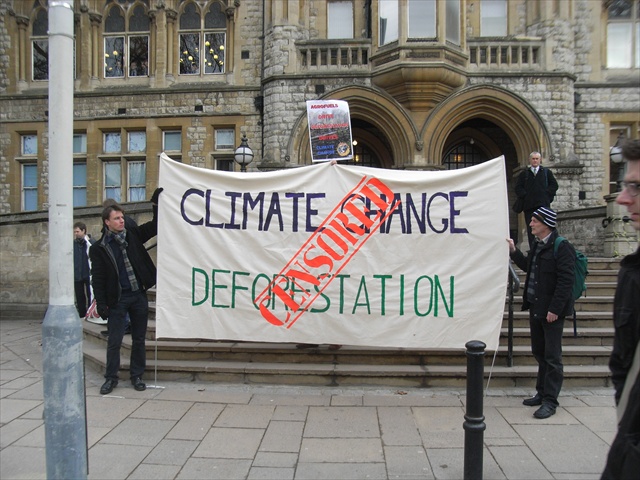 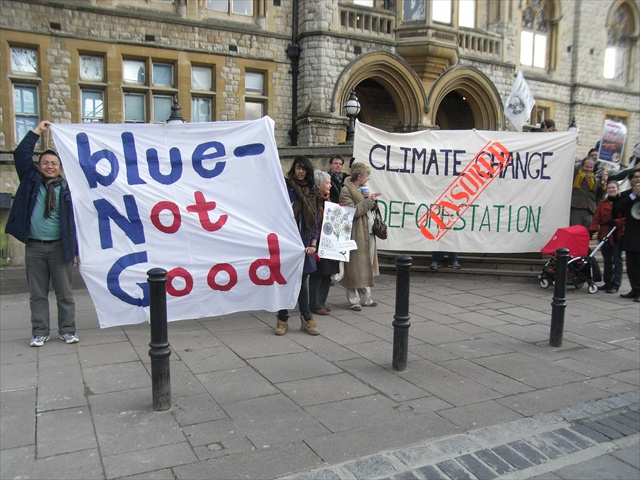 Campaign groups Biofuelwatch and Friends of the Earth Ealing made such a strong case against biofuel burning in the first week of the Appeal that on occasions, lawyers for biofuel power company Blue National Grid were left scrambling for substance.

Robert Palgrave from Biofuelwatch stated “When we communicated the real data on air pollution based on monitoring stations in the locality, the discrepancy with Blue National Grid’s figures brought their case into question.”

Nic Ferriday from Friends of the Earth Ealing said “We are extremely unhappy that Blue National Grid are attempting to overturn the unanimous decision of local councillors against the power station, but this week’s events found their lawyers clutching at straws. The only way this station can be allowed is if EU regulations on air pollution are ignored”

Outside on the street campaign groups Food Not Fuel and Down to Earth held a banner protest voicing the illegitimacy of the Appeal stating that key evidence on deforestation, climate change, human rights abuses and food poverty associated with producing the vast quantities of vegetable oil needed were being excluded as “immaterial” to the case.

The case continues into its second week on Tues 16th and ends at close of day on Wednesday 17th. Sessions begin at 10:00am. All are welcome to attend the Appeal hearing at Ealing Town Hall, Ealing Broadway.