Nahr al-Bared refugee camp has still not recovered from the devastating war in 2007 during which it was destroyed. 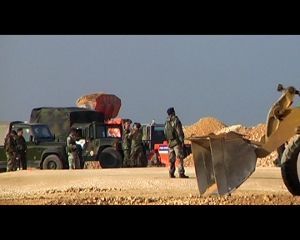 The Lebanese army has been keeping a tight grip on the camp and the 20.000 displaced Palestinians that have returned so far. The army's siege seriously hampers the camp's economic recovery, as access is restricted and the area was declared a military zone. A recent survey found that the army's presence and measures are considered a difficulty by 98 per cent of Nahr al-Bared's business owners. The army meanwhile justifies its presence as necessary to the preservation of the safety of the people.

A 30-minute film documents various consequences of the siege on Nahr al-Bared. Merchants and artisans explain their specific problems and the UNRWA project manager, a project coordinator of the Palestinian-Arab Women League, the president of Nahr al-Bared's Merchants' Committee and a researcher provide their views and thoughts on the issue.

The short documentary can be watched and/or downloaded here:

The autonomous media collective 'a-films' has been documenting Nahr al-Bared's post war developments over the past two and a half years. We have published various reports and produced about a dozen short films: