Being Muslim in US (by Latuff) 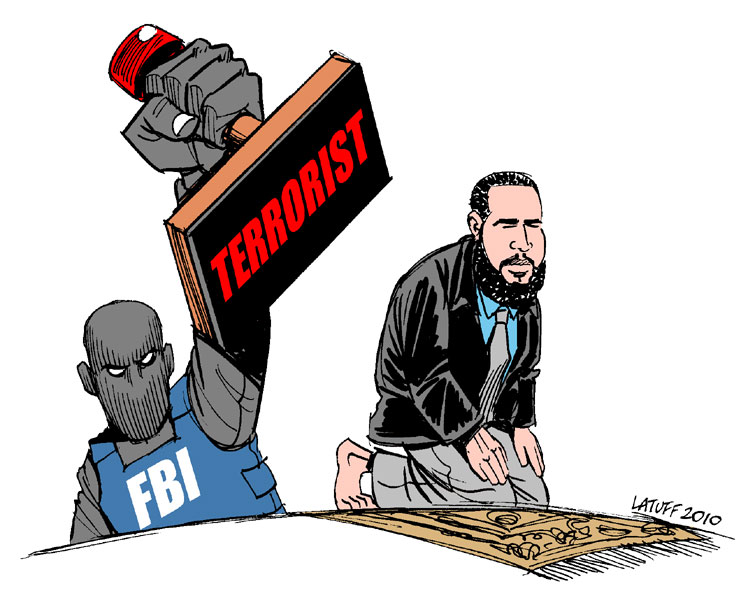 Tarek Mehanna is a 27 year old American-born Muslim Egyptian. Highly educated, he holds a doctorate in pharmacy from the Massachusetts College of Pharmacy. He is a devout, tolerant Muslim who is not only respected in the local Islamic and interfaith communities, but who also gives back to his community by fulfilling the roles of brother,
educator, mentor, scholar, and friend. Tarek is described by those who know him well as humble, reserved, warm, peaceful, charismatic, knowledgeable, and dedicated.

For several years Tarek has been a victim of FBI surveillance and harassment. When Tarek refused to backstab the Muslim community and be an informant for the FBI, they continually threatened him before taking an opportunity to arrest him in 2008. While Tarek was out on bail, FBI agents raided his home with an arrest warrant on October 21st, 2009.

Tarek was arrested again despite the lack of any new evidence since the prior apprehension. He is currently being held in solitary confinement, facing accusations of aiding and abetting terrorism. All of these FALSE charges have been fabricated by paid FBI informants. We ask you to join us to support our brother until he is released and
home with his loving family.