As British authorities are accused of turning a blind eye to fascist racial incitement and street violence, there is damning evidence BNP organisers are, as suspected, using the EDL to do the BNP's dirty work by plotting race riots in multicultural areas. 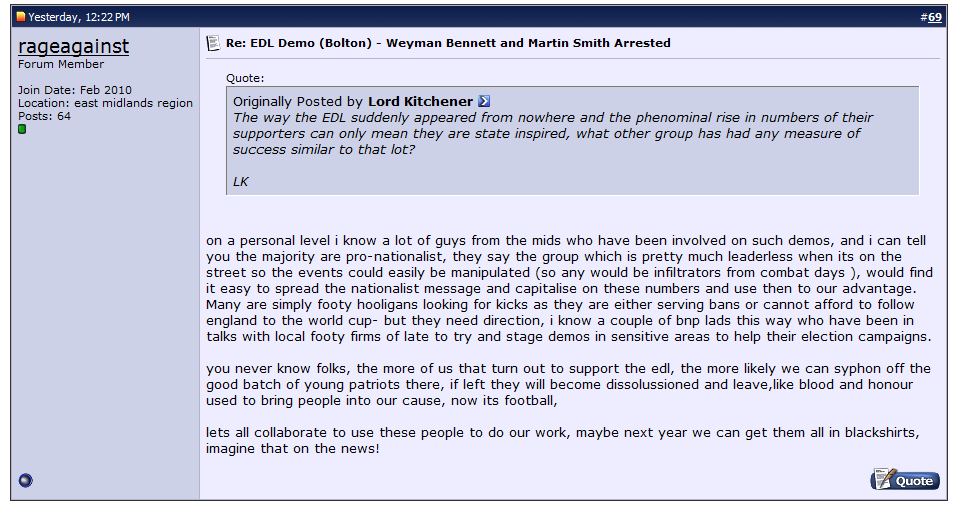 The alleged failure of the Greater Manchester Police to act impartially, coupled with the cancelling of charges against Tommy Robinson and the softening of media attitudes towards the English Defence League, have paved the way for the BNP to come clean about their interests with the EDL.

Until recently the British National Party were still peddling their tired and worn lies about the EDL being proscribed, even though Chris Renton has been outed as the Griffinite stooge with his hands on the reins of the nationalist football hooligan bandwagon. While some Aryan purists within the BNP err on caution on the presence of Uncle Toms in the EDL (just as they do regarding changing the BNP's constitution), many BNP organisers are now openly declaring their love of the EDL on hardcore neo-nazi chat sites such as Stormfront (see the screenshot), and the Griffinite "Covert Underground Nuisance Tactics" website (abreviated C.U.N.T.S).

"Covert Tactics" is one of the most racist Griffinite websites on the net, and bearing in mind their candid anti-Semitism, why would they throw their towel in with EDL rallies where a tokenite Israeli flag flown for effect (the Jew Flag as Aryan hardliners love to call it), unless the EDL had become the street-fighting division of the BNP (as suggested by the screenshot)?

On Saturday, Covert Tactics were openly supporting the EDL's visit to Bolton, carrying a live feed of the EDL rally, arguably peculiar behaviour for a website run by trusted close friends of Nick Griffin - Tommy Williams and Dave Howard.

Since the CPS dropped charges against Tommy Robinson, police forces up and down the country have noticeably dropped their guise of impartiality when policing EDL rallies and anti-fascist counterprotests. This change in attitude was first visible during the London scuffles when Dutch Islamophobe Geert Wilders arrived to speak in the House of Lords, when the Metropolitan Police waded heavy-handedly into law-abiding anri-racists, batons-blazing.

The policing debacle in Bolton when peaceful UAF supporters were arrested and released without charge, coupled with a parellel sea-change of the reporting of the British Media, (from the Guardian to the BBC, politically correctly labelling the EDL merely "right wing" rather than far right), questions must be asked as to what deals (if any) were done in secret, in the Sheffield Police Station interrogation room, between the authorities and the leadership of the EDL.

For the Establishment to do a sudden about-turn following the EDL's violent anti-police thuggery of Stoke, is absolutely astonishing.

From the BPP to the BNP and the National Front, Special Branch are believed to have infiltrated the whole of the Far Right using the carrot as well as the stick.

For every threat or sanction comes a concession (in this case, if true, a loss of impartiality and softening of policing towards EDL racism and criminality). If it was public knowledge the leadership of the EDL had done a deal with the police or the government following interrogation in Sheffield (under coertion or otherwise), the organisation's credibility would be in tatters, and their followers would walk away, accusing the leadership of having "sold out", thus a juicy "carrot" (the Metropolitan Police viewed as taking sides rather than doing a deal). goes some way to convince the EDL's supporters its leaders still have its interests at heart.

Just how the EDL's majority football hooligan support base will react if they discover their leadership have grassed-up its loyal football hooligans to Special Branch, is not known, as for the moment, the extent of "state-collaboration" will be hidden amongst the celebrations of a seemingly victorious EDL, but if the police continue to treat the EDL with kid gloves, people will eventually ask awkward questions.

It takes a quarter of a century for official documents to be declassified. It wasn't until many years after Margaret Thatcher left office when the horrid truth was revealed about illegal paramilitary police tactics, agent provocateurs and state-approved strike-breakers in the miners strike, by which time, most if not all key players have left office, making justice for the wronged victims largely impossible. The time-friendly veil of secrecy afforded to the police, government and civil service allows human rights abuses to happen safe in the knowledge nobody will ever be held to account for their actions.

The intrigue of what went on in the Sheffield police station interrogation room might never be known, but if the authorities continue to treat the EDL with kid gloves, society will most definately suffer.

How much longer must Britain's racial and religious minorities suffer open incitement, whilst the upholders of law and order continue to turn a blind eye to illegally provocative chants, Facebook and YouTube death threats to journalists, and open calls online for racist murder and the "wiping out of Muslims?"

The 89 year old veteran campaigner knocked over by out-of-control riot cops was an act of criminal negligence, and the apparent taking of sides with the neo-facists of the EDL makes a mockery of the supposed impartiality of the Greater Manchester Constabulary. Several policemen have been filmed laughing and joking with EDL leaders, which proves beyond all doubt the lack of professionalism of the Bolton police.

Immediate questions must be asked to our democratically elected government in regards to whether secret deals have been done between the EDL and the state. Nobody in their right mind appreciates gangs of maurading soccer thugs fighting amonst themselves outside football grounds, trashing pubs, shops, trains and buses with insane abandon, but if the EDL leadership have indeed thrashed out a deal to grass-up their football hooligan followers in return for "public respectability", this is of concern for everybody.

If organised racism is being tolerated just so the British Sporting Scene can be cleansed of hooligans in time for the 2012 Olympics, to assure the safety of tourists, without more importantly considering the safety of our own racial and religious minorities from the "well directed boot or fist", democracy is well and truly failing.

The far right have made a meal of the fact that fewer EDL racists were arrested at Bolton, while ignoring the fact that EDL thugs were not arrested for inflamatory chanting, throwing missiles, and walking the streets drunken and disorderly. If the amount of actual crimes are considered per person, the EDL would be seen as culprits not victims. The only reason there was not an Anti-Muslim pogrom as in Stoke, is down to the steadfastness and refusal to budge under intense pressure of the mostly peaceful anti-fascist supporters. Whether socialist or anarchist, Quaker, Buddhist, Muslim or Athiest, there was unity against a common enemy last Saturday, and ignoring the heavy internet trolling of the far right and the dodgy pro-EDL media spin, everybody who attended Bolton helped ensure the fight-hungry EDL yobs went home unfulfilled.

Don't be fooled by either arrest numbers or EDL lies, trolling and spin. With a ready-made army of seasoned ultra-violent football hooligans, regardless of public intent, the EDL's sole intent is to cause deadly race riots, and the greatest danger is that complacency will allow this to happen. A number of smaller-scale EDL events are happening shortly in the Midlands and the South where the EDL will "lie low", preparing for far more destructive altercations when the time is right.

The ethos of the Turner Diaries, a popular read of the Far Right, is one of "leaderless resistance", racial terrorism and open racial warfare on the streets, and this is the reason the BNP have reportedly taken control of the EDL.

Whichever puppeteer is running things at the top, be it Chris Renton, Nick Griffin, Tommy Robinson or Alan Lake, the EDL's "political agenda" is in-line with that of Geert Wilders, i.e., vehemently Islamophobic and designed to alienate an entire community not just religious extremists, stopping mainstream Muslims from practising their faith (closing down mosques, banning Halal meat), with the ultimate aim of reducing the numbers of Muslims in the UK, something that can only be achieved via forced repatriation, nazi-style sterilisation, or a Muslim Holocaust, as British Muslims are here to stay.

If you think this is alarmist, spend time trawling through the many thousands of Facebook and genocidal YouTube comments. Behind the spin and trolling of Trevor Kelway, forget the lack of arrests at Bolton. The EDL's street-fighting agenda and their continued utilisation of violent racist hooligans, inviting Wigan Mike and Liam Pinkham to attend rallies via the phone (as recently revealed on VNN), supports the observations that they are merely waiting their chance to create "the mother of all race riots".

Nobody has the moral right to march willy-nilly through towns and city centres peddling hated and fear under the guise of free speech, be it (banned) Islamic extremists or (not banned) racial supremacists. Allowing racist chants to go unpunished, while fascist-friendly police phyically assault peaceful anti-racist protestors simply exercising their opposition to organised racial hatred, is an abuse of the very Western democracy the EDL neo-Nazi thugs claim to hold dear.

If EDL grasses are (as alleged) helping the authorities entrap a handful of British football hooligans while whole communities suffer fear, hatred and desperation, this is most surely a price not worth paying.

The General Election approaching, ask your prospective parliamenatry candidates how they will protect communities from EDL invasion, and vote accordingly.