It’s day three of the occupation of Black Wood, a designated wildlife site and ancient woodland, as campaigners attempt to stop UK Coal from open cast mining 720,000 tonnes of coal from their Blair House site in Fife. The woodland was occupied last Sunday as 25 activists blocked and barricaded the access road using a scaffolding tripod, and took to the trees putting up nets, platforms and treehouses. 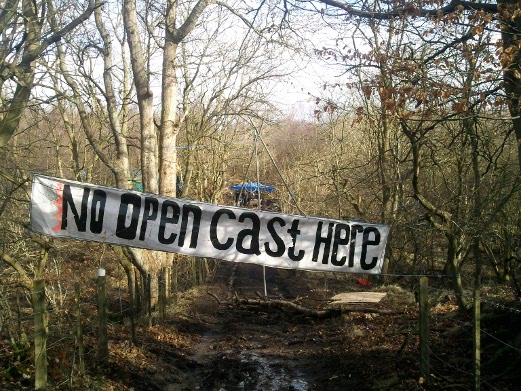 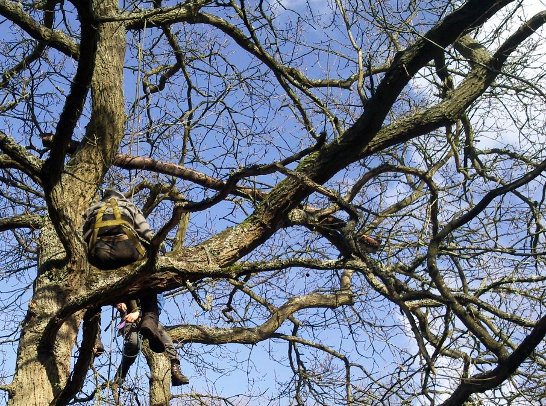 Despite the occupation, contractors have continued to fell the birch and oak forest, with occupiers having to watch a huge oak being felled metres from the camp. The sound of chainsaws and machinery surrounds the occupied woodland, with the forested area getting smaller and smaller each day, despite the close proximity to dwellings, tents and tree defences. Support and numbers are needed at the camp.

Meanwhile, local support for the camp is growing with near-by residents who opposed plans for the mine visiting the camp and offering their support. Other visitors have included ever-increasing ranks of police officers, including Glasgow’s V-Division, the tactical support unit, who went around with a spotter card and video camera. There is still a permanent police “checkpoint” before the entrance to the camp, but they’re quite friendly and might even offer to drive you to the bus stop if you’re lucky.

Looking out over the Firth of Forth from the site, over countryside, old coal bings and mining communities, the Longannet smokestack looms in the distance. ScottishPower’s Longannet coal-fired power station is the second largest in the UK and the destination for the coal from this site. Due to be “refurbished”, this is the largest source of CO2 emissions in Scotland and a testament to an archaic and dangerous energy supply.

For as long as places like Longannet burn coal, whether in Fife, South Lanarkshire or in Colombia, communities will have their health impacted, their land stolen and their environment trashed. The world’s ecosystems will continue to collapse and species extinction will continue to spiral out of control. Unless, that is, we make a stand. This occupation is the second occupation of a UK Coal site in two weeks – and such direct action, rooted in community struggle, offers the only glimpse of hope that we have of stopping the wholesale destruction of the planet.