Between three and five thousand Abahlali baseMjondolo members marched on Jacob Zuma on South Africa's national holiday 'Human Rights Day'. This march was the first mass protest by the movement since they were attacked by a state backed militia last year at the cost of two lives and many hundreds of people made homeless. City Manager, Mike Sutcliffe, had sought (and failed) to ban the march altogether. 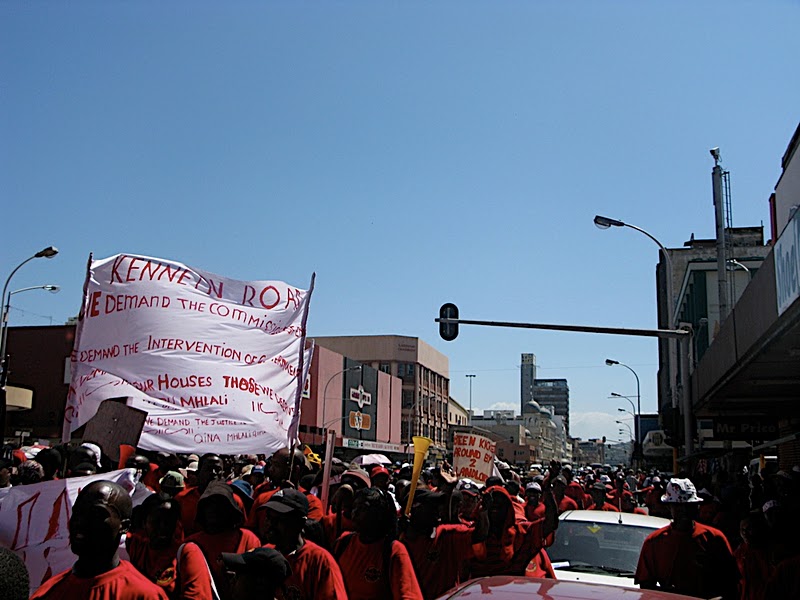 We, members and supporters of Abahlali baseMjondolo and the Rural Network in the province of KwaZulu-Natal, are democrats committed to the flourishing of this country. We speak for ourselves and direct our own struggles. We have no hidden agendas. We have been mobilised by our suffering and our hopes for a better life. We believe that it is time to take seriously the fact that South Africa belongs to all who live in it.

We are all agreed that there is a serious crisis in our country. The poor are being pushed out of any meaningful access to citizenship. We are becoming poorer. We are being forced off our land and out of our cities. The councillor system has become a form of top down political control. It does not take our voices upwards. The democracy that we won in 1994 is turning into a new system of oppression for the poor.

We have had meetings in all of our areas to discuss this march. Each area has developed its own set of demands which we are presenting to you. We have also taken all the demands that are common to many areas and put them together into this statement of our collective demands. We offer it to you as a statement of our demands. We also proclaim it to ourselves and to the world as a charter for the next phase of our struggle.

For too long we have been subject to evictions from our homes, be they in shack settlements or farms. These evictions are often unlawful, they are often violent and they often leave the poor destitute. Therefore we demand an immediate end to all evictions so that we can live in peace and with security.

For too long our communities have survived in substandard and informal housing. Therefore, we demand decent housing so that we can live in safety, health and dignity.

For too long those of us living in shacks have suffered without enough water and without toilets, electricity, refuse collection and drainage. Therefore we demand decent social services in all our communities so that we can live in safety, health and dignity.

For too long many of those of us who are formally connected to water and electricity have not been able to afford the costs of these services and face disconnection. Therefore we demand that these services be made free for the poor.

For too long the promise of housing has been downgraded to forced removal to a transit camp. These transit camps are more like prisons than homes. If they are ‘delivery’ then they are the delivery of the people into oppression. Therefore we demand an immediate and permanent end to all transit camps so that the dignity of the people that have been taken to the camps can be immediately restored.

For too long the housing that has been built has been built in human dumping grounds far outside of the cities and far from work, schools, clinics and libraries. Therefore we demand immediate action to release well located land for public housing. Where necessary land must be expropriated for this purpose. The social value of urban land must be put before its commercial value.

For too long people that are already languishing in human dumping grounds have been unable to access the cities. Therefore we demand the immediate provision of safe and reliable subsidised public transport to these areas.

For too long there has been rampant corruption in the construction and allocation of housing in transit camps, RDP housing and social housing. Therefore we demand complete transparency in the construction and allocation of all housing and an immediate end to corruption. We demand, in particular, a full and transparent audit into all the activities of the social housing company SOCHO – including its CEO, general manager and board of directors. We demand a similar audit into all the activities of Nandi Mandela and her associates.

For too long poor flat dwellers have suffered from unaffordable and exploitative rents. Therefore we demand the writing off of all arrears and the institution of an affordable flat rate for all.

For too long farm dwellers have suffered the impoundment of their cattle, demolition of their homes, the denial of the right to burry their loved ones on the land, the denial of basic service and brutality, and sometimes even murder, at the hands of some farmers. The bias that the justice system has towards the rich has meant that it has systematically undermined farm dwellers. Therefore we demand immediate and practical action to secure the rights of farm dwellers.

For too long a fair distribution and use of rural land has been made impossible by the fact that land –a gift from God – has been turned into a commodity. Therefore we demand immediate steps to put the social value of rural land before its commercial value.

For too long the attack on our movement, its leaders and well known members, their family members and its offices in the Kennedy Road settlement in September last year has received the full backing of the local party and government structures. Therefore we demand

• a serious, comprehensive and credible investigation into the attack and its subsequent handling by the local party and government structures. This must include a full investigation into the role of the South African Police Services.
• the right to return for all the victims of the attack, including the Kennedy Road Development Committee and all its sub-committees. This right must be backed up with high level protection for the security of all the residents of the settlement.
• full compensation for everyone who lost their homes, possessions and livelihoods in the attack.
• a full and public apology by Willies Mchunu for the attack and its subsequent handling.
• the immediate release of those members of the Kennedy 13 who are still being held in detention.
• that immediate steps be taken to ensure that Willies Mchunu, Nigel Gumede and Yakoob Baig are not allowed to interfere in any police or judicial processes resulting from the attack.

For too long our communities have been ravaged by the cruelest forms of poverty. Therefore we demand the creation of well-paying and dignified jobs.

For too long the right to education has been reserved for the rich. Therefore we demand free education for the poor.

For too long we have not been safe from criminals and violence. We are especially concerned about the lack of safety for women in our communities. Therefore we demand immediate practical action to secure the safety of everyone and, in particular, the safety of women.

For too long the poor have been turned against the poor. Therefore we demand an immediate end to all forms of discrimination against isiXhosa speaking people (amamPondo) and people born in other countries.

For too long the legal system has been biased against the poor. Therefore we demand serious practical action to ensure that access to justice is no longer distorted by access to money.

For too long the councillor system has been used to control the people from above and to stifle their voices. Therefore we demand the immediate recognition of the right of all people to, if they so wish, organise themselves outside of party structures in freedom and safety.

Furthermore, just as people from around the city, the province and the country are uniting in support of our struggle we express our support for our comrades elsewhere. We have stood with, and will continue to stand with our comrades in Wentworth, our comrades in the Poor People’s Alliance and struggling communities and movements across the country. We thank everyone who has demonstrated solidarity with our struggle including church leaders, students and our comrades in other countries. We will do our best to offer the same support to your struggles.