A glimmer of hope for the London-Gaza protesters

All charges were dropped against 24 year old protester Jake Smith yesterday in Isleworth Crown Court after it emerged that the police had withheld crucial CCTV footage which could have exonerated him at a much earlier stage. The prosecution held onto the footage for 14 months and only released an extra seven and a half hours worth of video evidence to his legal team the day before his trial was due to take place, hidden amongst which were a few vital seconds of exculpatory evidence. Jake had been charged with two counts of violent disorder which included moving a police barricade during the protests, but what the withheld footage has now revealed was him being hit repeatedly by the police with their batons and shields and then him falling to the ground only 37 seconds before he moved the barrier, which he said he did for his own protection. 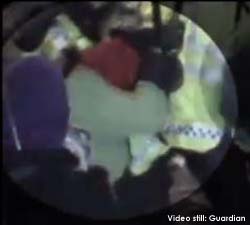 This is a very important development as it is one which calls into question the fundamental way that all of the protest cases have been handled thus far. From the very beginning there have been widespread criticisms that the arrests and prosecutions discriminatorily focused on young British Muslim men. While it is true that Jake was one of the very few non-Muslims to be arrested, it is a promising development nonetheless. Many of the protesters that MEMO have spoken to over the last few months have complained that the police footage that was used to build the prosecution's case against them was unjustly selective and only showed the few seconds where they may have thrown something, for example, but did not show the prolonged police aggression and brutality against themselves and the rest of the protesters beforehand. Some have argued that they were directly reacting to police provocation and some were actively trying to defend other people in the crowd who had allegedly been manhandled or hit by the riot police.

The way in which the prosecution has handled the protest cases calls into serious question the legitimacy of all of the cases heard thus far. If the previous cases are anything to go by, Jake Smith was only hours away from being undeservedly sentenced to an extremely harsh and disproportionate custodial sentence. If such a miscarriage of justice has been found to exist in one case, it seems wise to suggest that all of the other protest cases should also be thoroughly reviewed. These protest cases have already had a devastating impact on the lives of the protesters and their families. Most of the protesters were very young men who were of previously excellent character and had extremely bright futures ahead of them; futures that it now seems may have been blighted because of a deliberate prosecutorial misrepresentation of the facts as they occurred on the days of the protests.

Not only have the sentences handed down already been lambasted as grossly disproportionate by parliamentarians, academics and members of the public but they have also been criticised for not taking the police behaviour during the protests into account. This includes complaints about the police use of "kettling" the crowds as well as the physical abuse of peacefully protesting members of the public. This latest development further supports that point and shows that the police did indeed provoke the crowd on many occasion by attacking unarmed members of the public without due cause.

Each of the protesters who have already been sentenced should now take this into account when making decisions about their appeals and those who have cases pending should also re-evaluate their positions. What these young protesters and their families have already gone through is, in the vast majority of the cases, totally unfair and unwarranted. The protesters have already been handled in an extremely heavy-handed manner, from the police dawn raids taking place months after the protests, to Judge Dennis's apparent disregard for their mitigating circumstances and now, in light of the latest development, the withholding of vital exculpatory evidence as well.

Jake's case is not the first bit of good news for the protesters recently. London-Gaza protester Layla Lahovidek walked free from the Royal Courts of Justice yesterday after the judge held that her original 15 months custodial sentence was unjust. This was the conclusion he came to after considering how disparate her sentence was compared to that of Miriam Hamid who was only given a twelve months suspended sentence for her part in the same incident in Starbucks.

Let us now hope that these developments are the beginning of a new trend in these protest cases in which it is justice that is to be served and not simply a wider political agenda.

A video of the evidence that has now exonerated Jake is available on the Guardian website.

A video of the evidence that has now exonerated Jake is available on the Guardian website.