A small group of protesters came to the Home Office on Tuesday evening to protest against the trials of protesters, mainly young Muslims, against the Israeli invasion of Gaza last year and the draconian sentences which are being imposed. London, UK. 30/03/2010 Photos Copyright (C) 2010, Peter Marshall, all rights reserved. 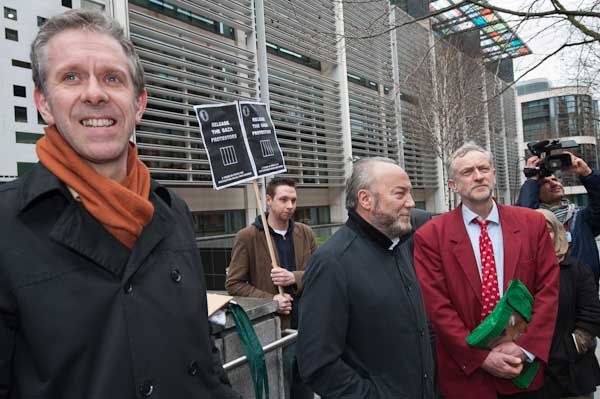 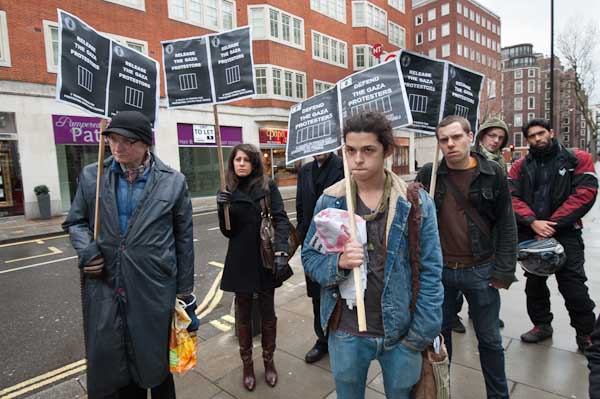 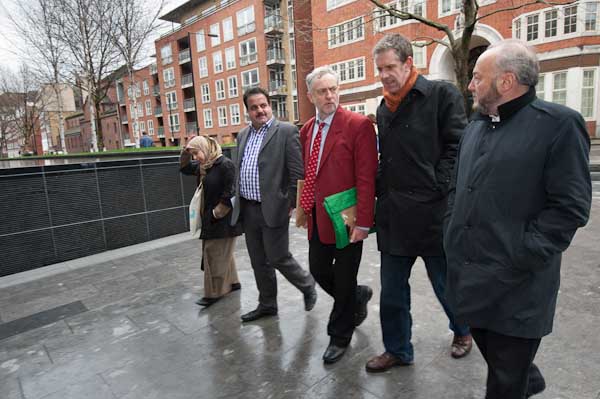 Taking the Petition in to the Home Office 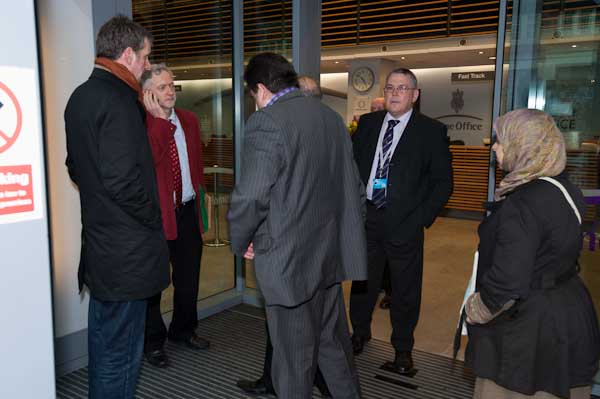 Protesters keep up the pressure outside

The event was organised to mark the handing in by two MPs, Jeremy Corbyn and George Galloway, of a petition with more than 1200 signatures organised by Stop the War against the sentences imposed on these young men for largely minor offences, often committed in the heat of the moment following provocations by police.

Particularly worrying are the actions of the judge involved who is said to have told many of those charged before the trial that he had seen the video evidence from the police and Sky News and on that basis he advised them to plead guilty.

Having apparently pre-judged their trials, when sentencing he went on not as was expected to mitigate the sentences for those who had followed his advice and pleaded guilty, but to give many of them lengthy prison terms which he stated were intended to serve as an example to other members of their community not to behave in this way.

The idea of such "exemplary" sentences is in my view repugnant, and an abuse of the human rights of those sentenced. Sentences should fit the crime and take account of mitigating circumstances, and should definitely never reflect the prejudices of a judge or the wish of the constabulary for revenge.

Those demonstrators who took proper legal advice were doubtless urged to plead not guilty, and so far all who did have had their cases dismissed. In the case of one of them, Jake Smith, the defence was able to show film of him being assaulted by police before the alleged offence took place.

As someone who was at these demonstrations taking photographs, I was certainly aware of the violent attacks by riot police including as their targets many in the crowd who did not appear to be behaving violently, as well as some disorder in the crowd - and was lucky to avoid some of the placards, bottles, shoes and bags of flour thrown at police lines.

But so often it seemed fairly clear that those who the police was ordering to move back were in fact unable to do so because of the press of people behind them. Although it is hard to see how such events can be policed entirely without disorder, it seemed clear to me that some of what happened was a result of police action. The evidence of police intimidation and violence on film, photographs and from witness statements is considerable and growing, and Stop the War are part of a campaign to have all charges dropped against the protestors.

If our judicial system were truly even-handed and concerned with justice we would see police on trial as well as a very much smaller number of demonstrators. Among those police on trial would of course be those who assaulted Smith, as well as the large group of officers who carried out an unprovoked assault on protesters in the underpass at Hyde Park on their way to the embassy.

At the Home Office things were rather quieter, with short speeches from George Galloway and Jeremy Corbyn, before the two MPs accompanied by representatives from the Palestine Solidarity Campaign, British Muslim Initiative and Stop the War went into the Home Office to deliver the petition.

At the doorway they were met by a security man who told them they could not come in and could not deliver a petition for security reasons; journalists were at this point ordered off the premises by the security staff. The deputation insisted they were going to deliver the petition and made it clear they would wait in the entrance until someone came to receive it. Jeremy Corbyn got on his phone to the Home Secretary's Office, and the protesters outside kept up the pressure by chanting. Thanks to his phone call and the presence of a noisy demonstration, eventually someone came down to talk briefly with them and take the petition.

They came out and reported on the events to the protesters outside and the protest continued for around 20 minutes with further speeches.

This story with more pictures is also on Demotix:

and I will put more pictures on My London Diary in a day or two: