Dateline: Southwark Crown Court, London, UK, 09:40-10:30, Tue 30 Mar 10 – On a grey and wet morning, a mere handful of protesters gathered for what we took to be the first substantive court appearance of the MP's Expenses Scandal Scapegoats. But we learned that the Press Association had already announced that the crooked "New" Labour porkers Elliot Morley, David Chaytor, Jim Devine weren't even going to show up! While inside Court No. 2 the swindlers' silks pleaded Parliamentary Privilege as their excuse for justice evasion, outside on the court steps, our People's Court put their whole corrupt-to-the-core system on trial. 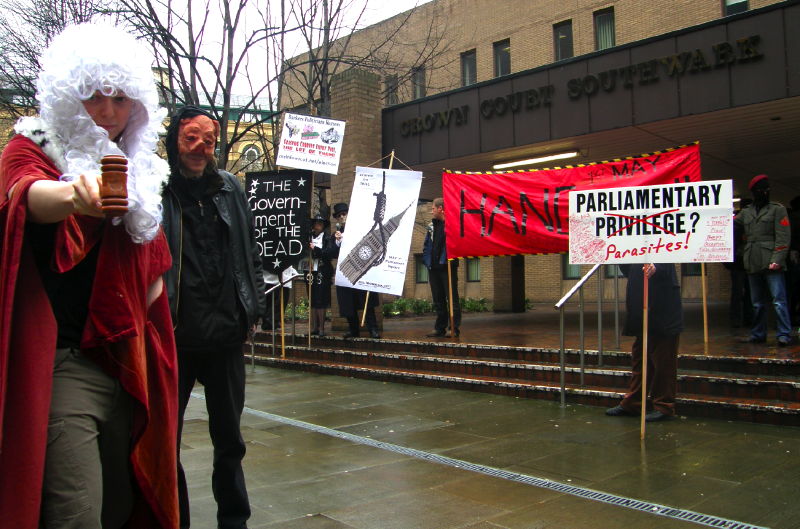 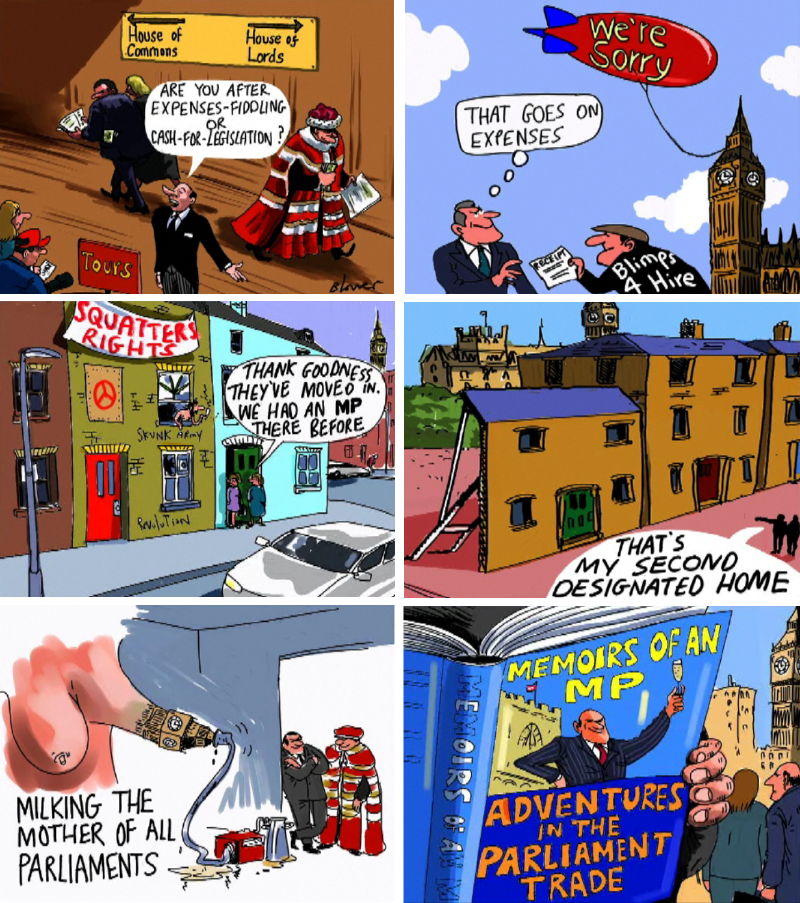 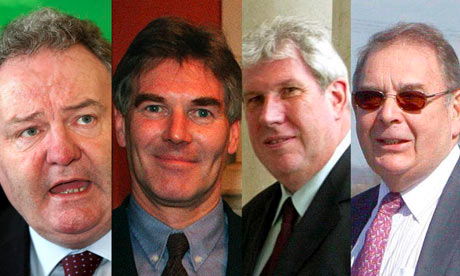 A3. The Accused – Devine, Chaytor, Morley and White 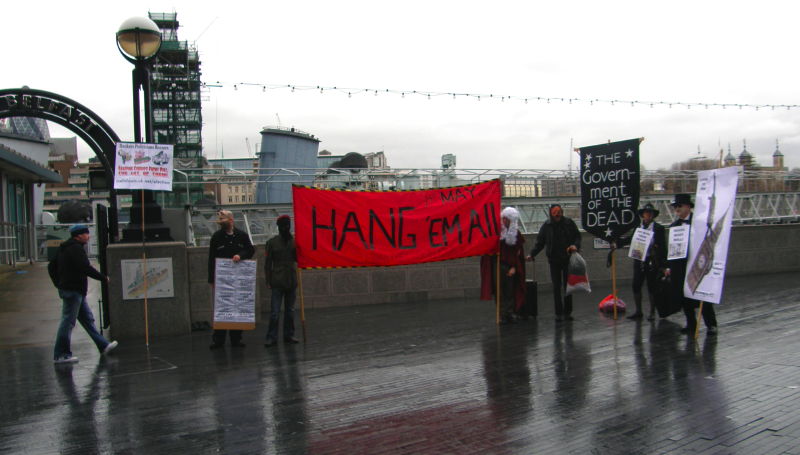 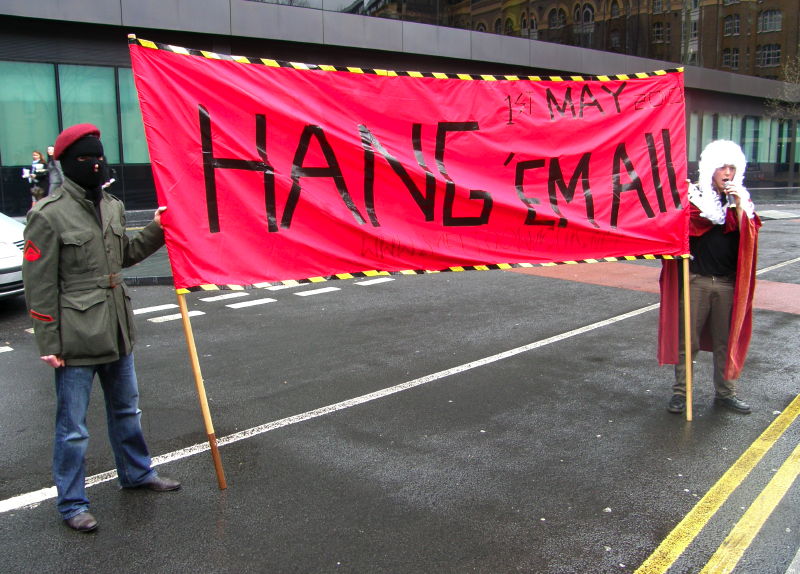 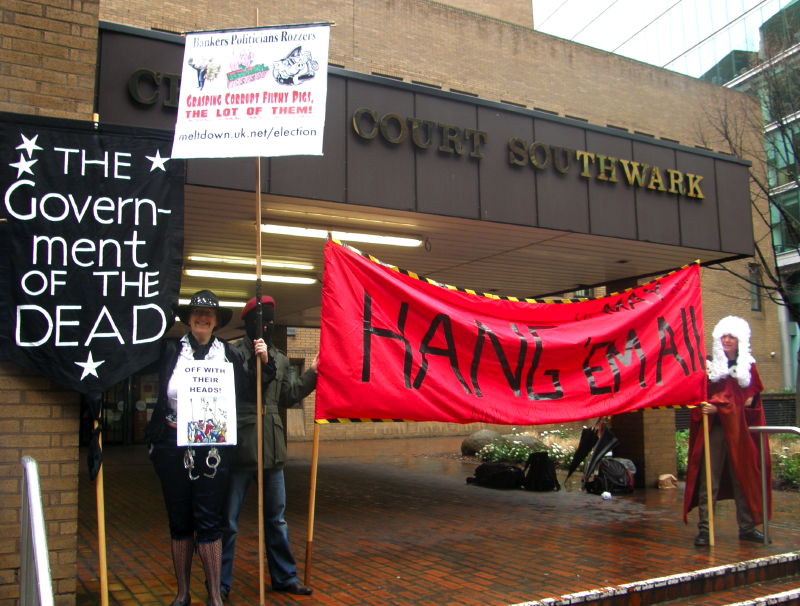 B3. GotDead – Meeting Your Street Theatrical Protest Needs Since 2008 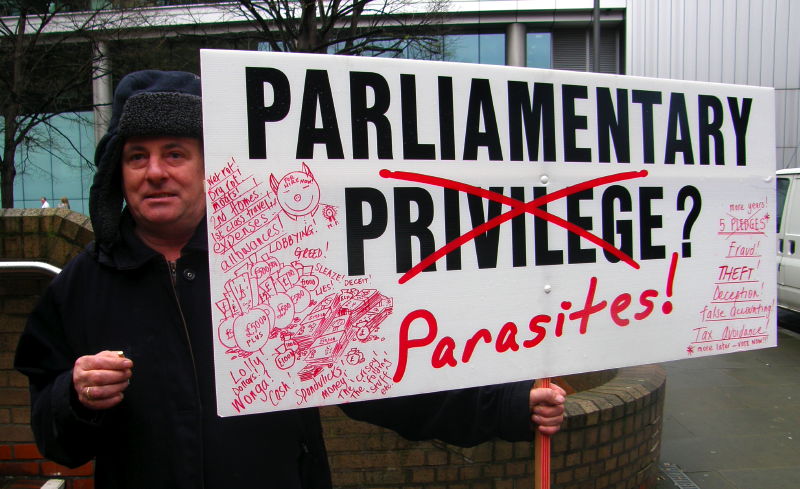 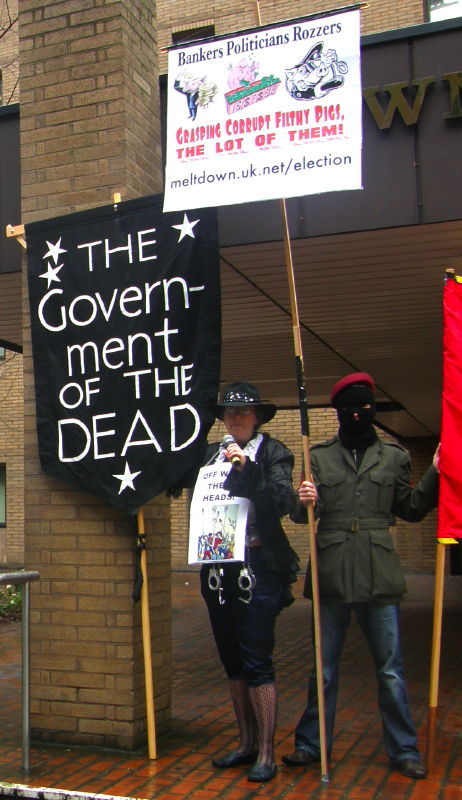 B5. Radio Mic's Rock Our Agitation 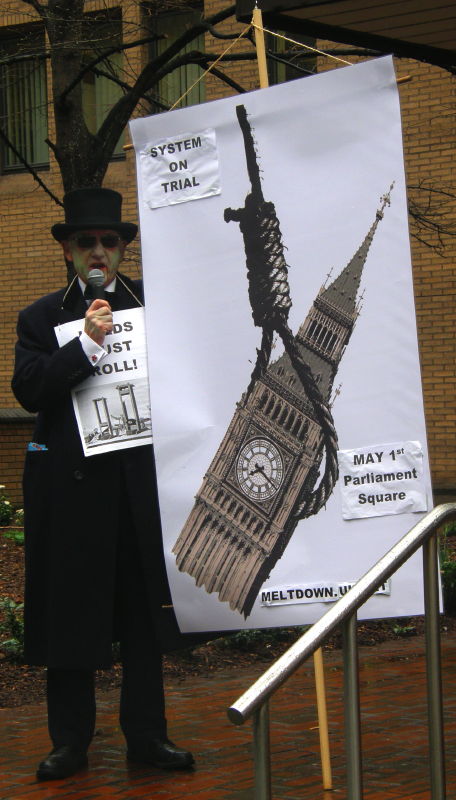 B6. Mister Mayhem at the Mic 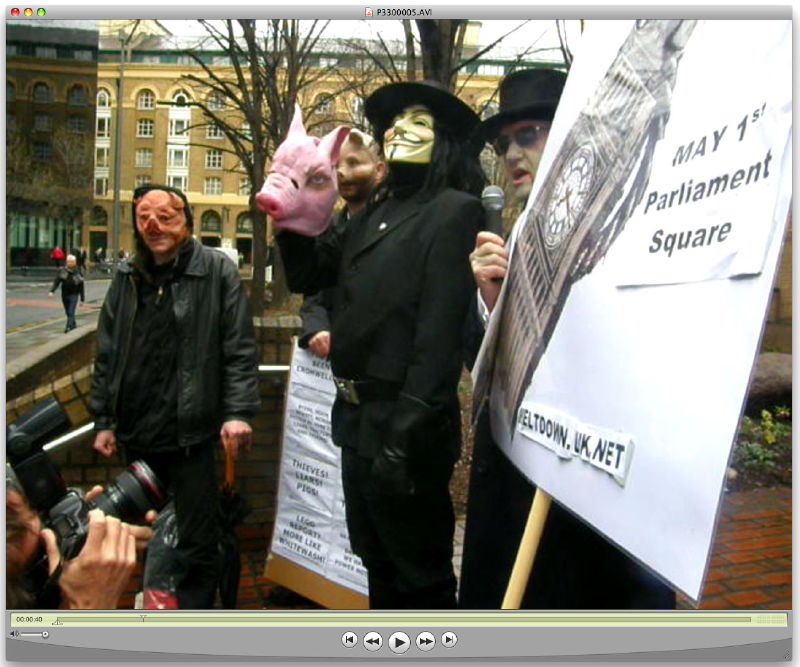 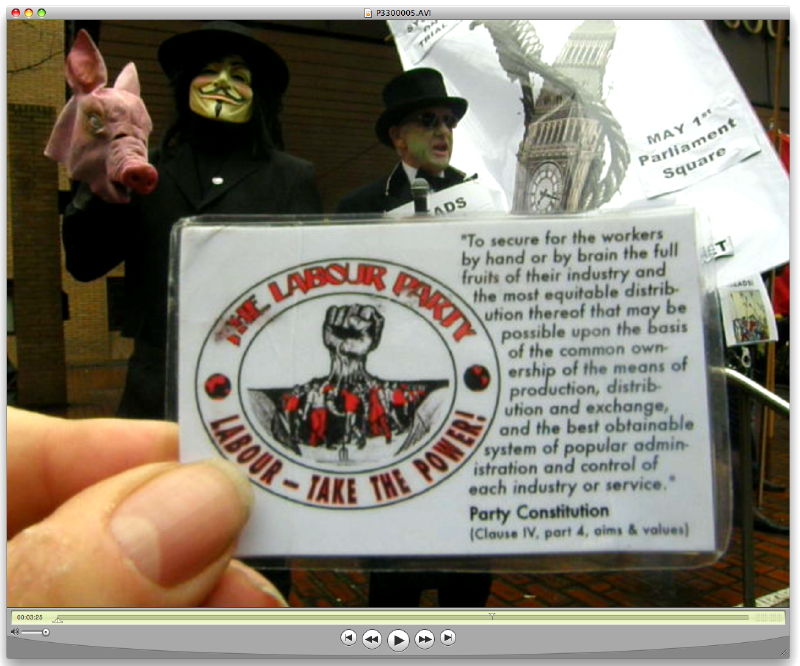 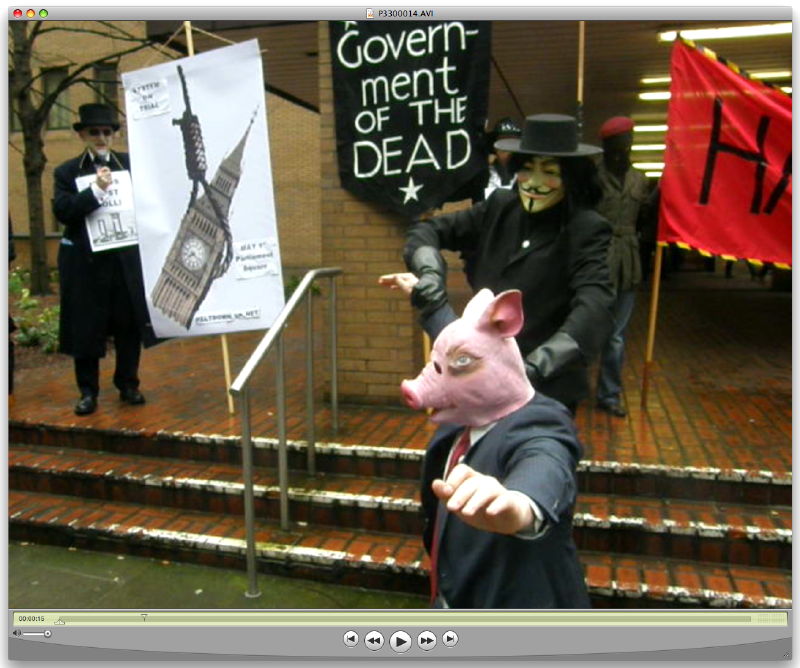 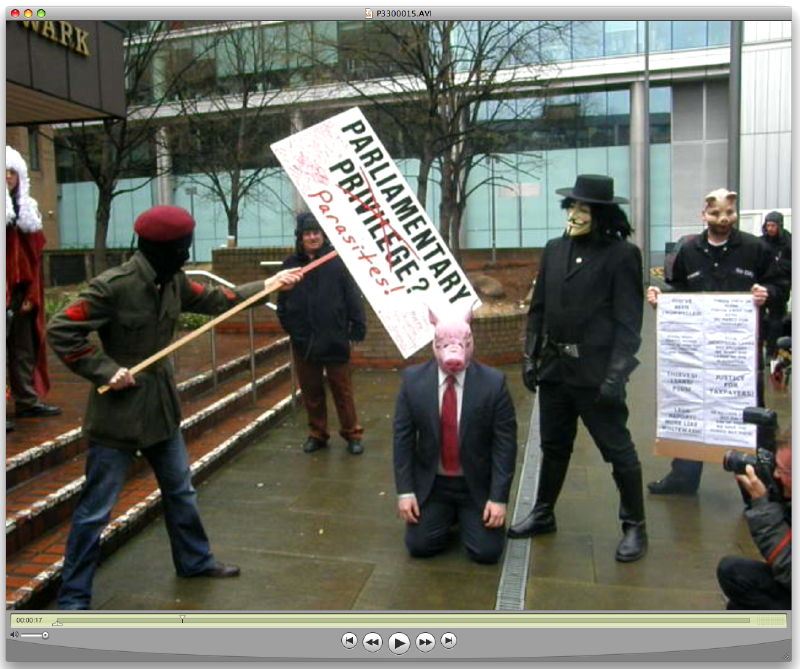 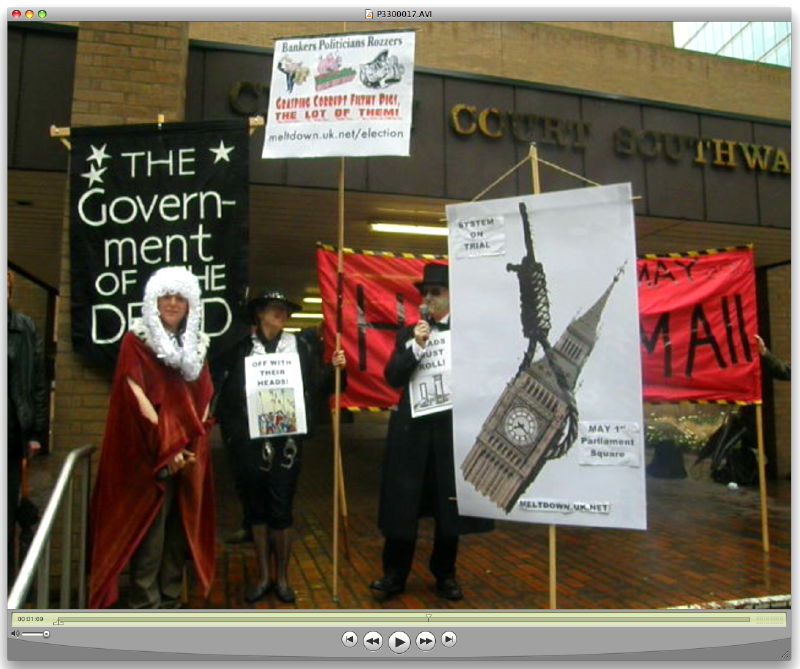 C5. Aren't the Judges Looking Younger Than Ever? (video still) 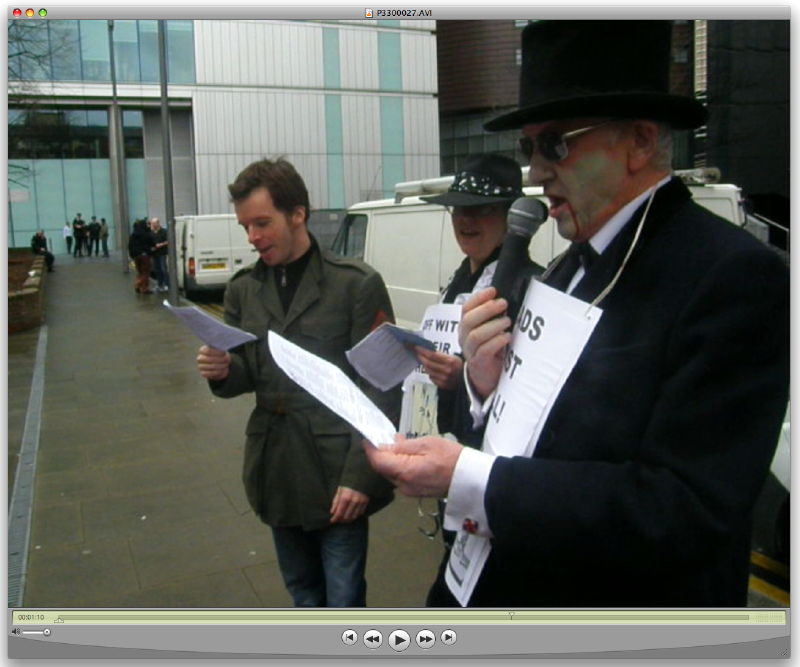 
MASS PARLIAMENTARY FRAUD
"The system of MPs' expenses was today condemned as "deeply flawed" with blame heaped on both MPs and the Commons fees office as 390 politicians found to have been in breach of allowances rules were told to pay back more than £1m."
~ Polly Curtis and Hélène Mulholland
• from "MPs' expenses: system 'deeply flawed', says Sir Thomas Legg", guardian.co.uk, Thu 04 Feb 10
» article –

If any other organisation discovered hundreds of its members had been systematically defrauding it for decades, what d'you think would happen? Mass arrests? Bulk prosecutions? Perhaps so, but not for 'the Mother of all Parliaments', oh no – a pitiful, preposterous, and paltry FOUR criminal prosecutions for false accounting are supposed satisfy the 'public' demand for justice:

• Eliot Morley – 57, MP for Scunthorpe: alleged to have dishonestly claimed a total of £30,428 more than he was entitled to in second home expenses on a house in Winterton, near Scunthorpe, between 2004 and 2007 - including 18 months after the mortgage on the property was paid off.

• Paul White, Baron Hanningfield – 70, ex-Tory Spokesperson for Communities, Local Government and for Transport: faces six charges of false accounting, relating to claims for overnight allowances from the House of Lords between 2006 and 2009, when records allegedly show he was in fact driven to his home near Chelmsford, Essex.


MINIMAL PUBLIC PROTEST
"Nearly 400 MPs swindle over £1,000,000 in false expenses claims over several years, and how many scapegoats are put up for criminal charges? Just three Labour MPs, and a token Tory Lord too. The 'public' were appalled, angry, and up in arms about this scandal – so how come, when the four Parliamentarian criminals first face charges in court, only SEVEN protesters turned up?"
~ Tim Dalinian Jones,
• from 'Criminal MPs Protest – Pix-&-Vidz – Thu 11 Mar 10', Indymedia London
» action report –

That was outside Westminster Magistrates Court three weeks ago. So some of us mobilised for a bigger, better, bolshier turn out at their next court appearance – eg: see...
• 'PEOPLE'S COURT – Putting the System on Trial!', at Election Meltdown
» event webpage –

http://www.facebook.com/event.php?eid=367632691983
...and numerous radical calendar and event listings websites, plus multiple email list shout outs, phones calls, flyers, announcements at public meetings and conferences, etc, &c.
Surely, the pent up public anger at the 100s of corrupt MPs using every trick in the swindlers' book would at last bubble up into at least a mildly disgruntled mob?

But, no – at our appointed meet-up point, HMS Belfast, 09:40, there were... SEVEN protesters. Not the same seven, mark you, though four of those who were dubbed...
• 'In praise of……..THE HORSEFERRY ROAD SEVEN', by Ian Bone
» blog entry –

http://ianbone.wordpress.com/2010/03/11/in-praise-of-the-horseferry-road-seven
...were among the Southwark Crown Court Seven.

Still, since the newcomers were stalwart radical street theatre aficionados The Government of the Dead, at least this poorly attended protest had a greater audiovisual appeal. But at it's "height", there were only ever 14 folk attending this protest – several of whom were merely idle bystanders (see below).


MEANWHILE, IN COURT
If you were due to appear at a Crown Court on serious criminal charges, and failed to show up on the day, what would the consequences be, d'you wonder?

In what looks to me suspiciously like like a sweetheart deal between the legislative and judicial arms of the British state, the scapegoat swindlers tossed to the public by Director of Public Prosecutions Keir Starmer weren't even required to show their greedy piggy snouts. With their lawyers fees being covered by legal aid (though they could be asked to pay back part of the money if they are eventually tried and found guilty), their top-dollar silks argued with judge Geoffrey Rivlin that their criminal embezzlements are exempt from scrutiny in the courts under the terms of the Bill of Rights of 1689, which says, "The freedom of speech and debates or proceedings in Parliament ought not to be impeached or questioned in any court or place out of Parliament."

So now their case moves to the High Court, 04-06 May 2010 – which means the swindling pond scum could be sitting in the dock on Election Day, Thu 06 May.

The cost to the taxpayer if all four men are tried is likely to run into millions of pounds.


IDLE BYSTANDERS
Election Meltdown at least did it's best to mount an audiovisually stimulating protest outside the Crown Court, with banners, placards, costumes, street theatre, sing-a-longs, and a 70W radio mic sound system. Indeed, we had more tat and costumes than people to hold and wear them.

Given the embarrassing failure of the massed ranks of Class War and the Whitechapel Anarchist Group to even get any of themselves along to the previous Magistrates Court appearance protest, despite their vowing to do so, you might think their input this time round would be in spectacular contradistinction to their prior epic fail. But you'd be wrong, oh so wrong.

During the People's Court, only two East End anarchists showed up, with nothing to contribute – hands in pockets, they stood idly by, mere onlookers. Indeed, the be-suited man who volunteered to wear the Pig Mask and play the role of a Crooked MP showed more commitment and initiative – and he'd "just come along to see what was happening". At one point in the drama, being so short-handed, the "Hang 'Em All!" banner needed just two people to hold it up – and the two East End anarchists declined an active invitation to do so, preferring to passively spectate from the sidelines instead.

After we'd decided to call it a day, another pair of East End anarchists showed up, chatted to the idle bystanders, then disappeared to Starbucks for coffee and more chit chat.


WHATEVER NEXT?
After creating the People's Court webpage and flyers, I announced them to the scores of people on our 'Election Meltdown – Activists List' in a message that ended as follows:
"My inner revolutionary optimist tells me I can trust you to pull together and Do The Right Thing for the general good of our Election Meltdown collective, our civilisation and our ecosphere. But my pragmatic pessimist reckons that if our People's Court turns out to be as much or worse of a shambolic farce as the Horseferry Road Seven debacle, then I shall have to seriously consider whether Election Meltdown deserves any more of my time and attention – so go ahead, and prove my pragmatic pessimist to be wrongly pessimistic."

Up to this point, I've been playing an active role in organising Election Meltdown, because a revolutionary general election intervention based on a May Day Carnival on International Workers Day, plus a People's Assembly predicated on Participatory direct democracy, seems like an eminently sensible way to Do The Right Thing. But given the abject failure of even the scores of people on the 'Election Meltdown – Activists List', let alone the London anarchist movement, to show up in strength of numbers at this preliminary street protest event, I am sad to say that I no longer feel it is worth my while expending such political energy and commitment, when so few others believe that to Do The Right Thing, in the right place, at the right time, really matters.

I still wish those remaining committed to Election Meltdown all the very best of good fortune in making this year's May Day a grand series of events to remember, and I look forward to providing pix-&-vidz coverage as an Indymedia citizen reporter. But I'm going to refocus by political energies elsewhere, initially in international solidarity with our Canadian First Nations sisters and brothers in their struggle to shut down the biggest single industrial climate crime on earth – the obscene and rapacious tar sands atrocity.

BP want to start extracting oil from the tar sands, the single most destructive project on earth - fuelling climate chaos and trampling the rights of indigenous communities. We want to stop them.

On Saturday, 10th April, hundreds of people from London and beyond will gather at the pumps to send a message to BP: “You’re not going into the tar sands without a fight!”

Come to a mass action! Bring yourselves, your friends, whistles and drums if you have them, and a Zone 1-2 travel card. Meet at Oxford Circus and be ready to make a move to our final destination.
» Interactive map of meeting point:

Expect dancing and drums, sunshine and soundsystems, party and protest.

This action is part of the BP Fortnight of Shame. Organised by London Rising Tide/London Tar Sands Network, in solidarity with the Indigenous Environmental Network.
»

The BP Fortnight of Shame (April 1 – 15 2010) is a call to action from the UK Tar Sands Network, Rising Tide, the Camp for Climate Action and the Indigenous Environmental Network to force BP to reverse their crazy plans
to move into Canada’s tar sands. It runs between the annual Fossil Fools day on April 1st, which in recent years has seen a flurry of action against the fossil fuels industry, and BP’s Annual General Meeting on April 15th. Grassroots groups across the UK and around the world, will be taking action in solidarity with First Nations communities in Canada to stop BP’s deadly plans in their tracks.