Party at the Pumps - April 10th

BP want to start extracting oil from the tar sands, the single most
destructive project on earth - fuelling climate chaos and trampling the
rights of indigenous communities.

We want to stop them. 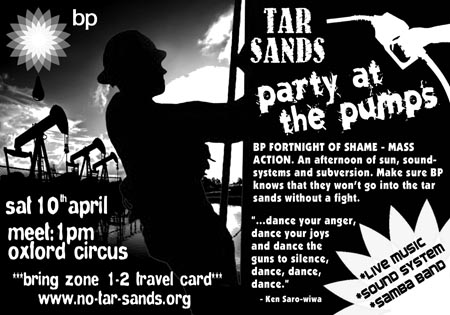 Party at the Pumps

On Saturday, 10th April, hundreds of people from London and beyond will
gather at the pumps to send a message to BP: “you’re not going into the
tar sands without a fight!”

Come to a mass action! Bring yourselves, your friends, whistles and drums
if you have them, and a Zone 1-2 travel card. Meet at Oxford Circus and be
ready to make a move to our final destination.
Interactive map of meeting point:

Expect dancing and drums, sunshine and soundsystems, party and protest.

This action is part of the BP Fortnight of Shame.
Organised by London Rising Tide/London Tar Sands Network, in solidarity
with the Indigenous Environmental Network.

The BP Fortnight of Shame (April 1 – 15 2010) is a call to action from the
UK Tar Sands Network, Rising Tide, the Camp for Climate Action and the
Indigenous Environmental Network to force BP to reverse their crazy plans
to move into Canada’s tar sands. It runs between the annual Fossil Fools
day on April 1st, which in recent years has seen a flurry of action
against the fossil fuels industry, and BP’s Annual General Meeting on
April 15th. Grassroots groups across the UK and around the world, will be
taking action in solidarity with First Nations communities in Canada to
stop BP’s deadly plans in their tracks.

Please post this call out to websites, blogs, newsletters and social
networking sites. A graphic for the event is attached to use as you wish!