BP ad campaign hoax kicks off the Fortnight of Shame

BP today had to halt the launch of a multi-million pound ‘Back to Black’ ad campaign. That’s right, BP’s award-winning ‘beyond petroleum’ brand took a hit today when a, previously unknown, PR agency delivered 22,000 revamped BP logos and a new sign to the company’s headquarters in St. James’ Square.The ad agency misinterpreted the brief to come up with a new logo that took account of BP’s decision to invest in the Canadian tar sands, and launched the multi-million pound ‘Back to Black’ campaign. 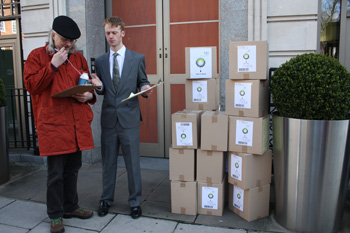 … What day is it? April Fools Day, a day for pranks both silly and serious.
So here’s what really happened:

Posing as representatives of a PR company, climate campaigners played a Fossil Fools Day prank on BP today by delivering 22,000 new logos – one for every BP logo in the UK – to the company’s HQ.

The campaigners, from London Rising Tide and the UK Tar Sands Network, piled boxes of ‘Back to Black’ logos on BP’s doorstep and d-locked a matching sign onto the building in protest at the company’s reversal of its decision to stay out of Canada’s controversial tar sands.

BP’s ‘beyond petroleum’ brand was never more than a slick charade and BP’s plans to move into the tar sands reveal the company’s true colours. We visited BP today to present a logo that’s more fitting for a company about to invest in the most destructive project on the planet.

Today marks the start of the BP Tar Sans Fortnight of Shame, which will see actions taking place up and down the country, all with a common message. Extraction in the Canadian tar sands is fuelling climate chaos and trampling indigenous rights, and we won’t let BP go into the tar sands without a fight.

If you want to get involved then come along to the BP Tar Sands: Party at the Pumps on Saturday 10th April, meet 1pm, Oxford Circus – more info at: www.risingtide.org.uk 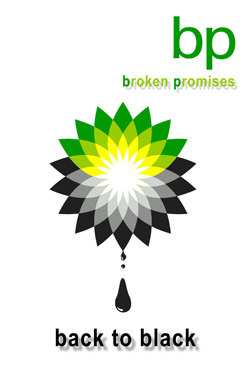 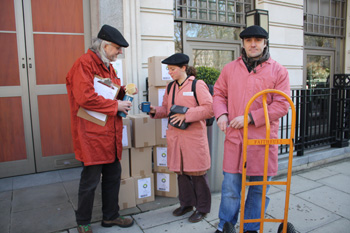 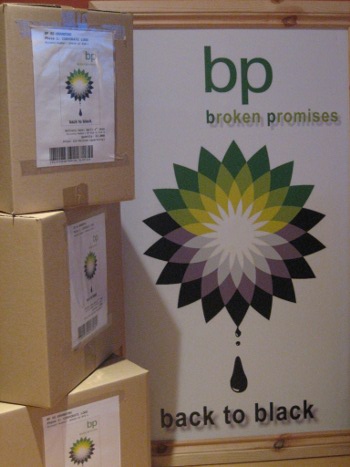