Ethiopians came from across the UK to demonstrate at Downing St where Meles Zenawi was co-chairing the UN climate finance group, demanding the UK stop appeasing the Ethiopian dictator, and calling for the release of opposition leader Birtukan Mideksa and other political prisoners in Ethiopia. London, UK. 31/03/2010 Photographs copyright (C) 2010 Peter Marshall, all rights reserved. 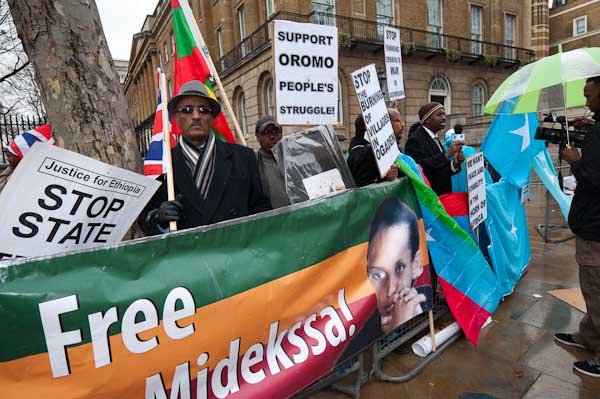 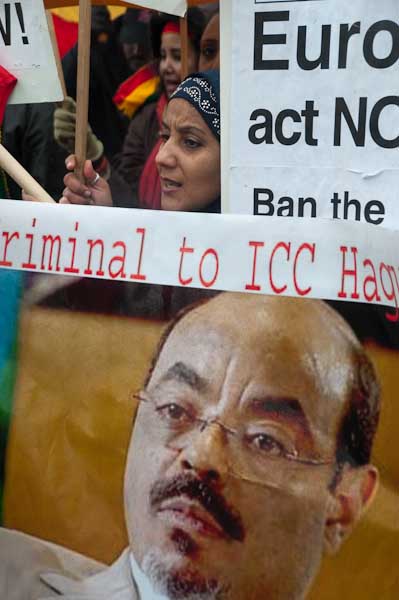 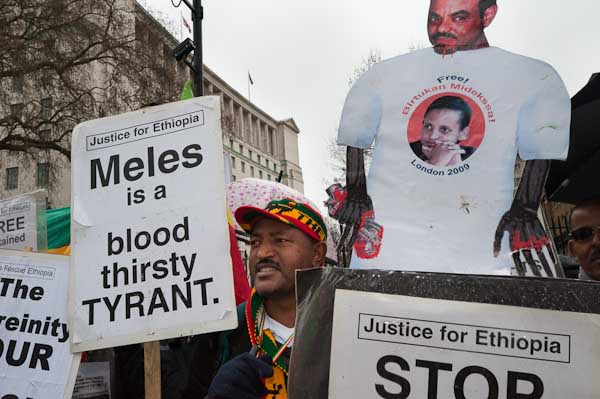 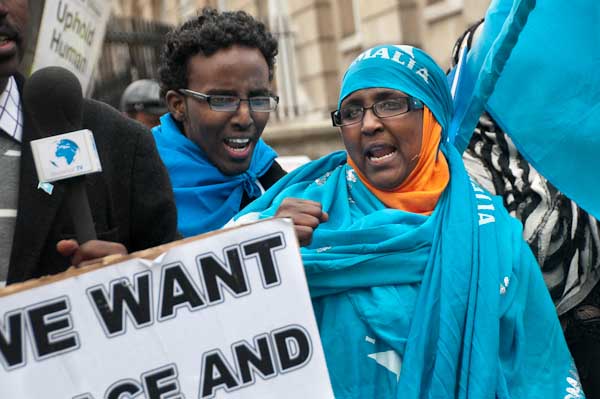 Somalis joined Ethiopians in the protest

The noisy and colourful demonstration lasted from 10am until around 5.30pm when Zenawi was driven away under high security, by which time I had long gone home. Although they only had permission to demonstrate until 4pm, they refused to leave until they had been able to demonstrate against him as he left.

Zenawi became chair of the Tigrayan Peoples' Liberation Front (TPLF) in 1985 when it was one of a number of military groups fighting in the Ethiopian Civil War. He became the leader of a coalition of rebel groups, the Ethiopian People's Revolutionary Democratic Front (EPRDF) when it took power in 1991, and has been Prime Minister since 1995.

Although Zenawi set up some democratic organisations in the country, his control of the military has made Ethiopia an effective one-party state. The leader of the main opposition Unity for Democracy and Justice (UDJ) party, Birtukan Mideksa (or Midekssa), a former judge, was sentenced to life imprisonment after her party won over a third of the seats (despite much vote-rigging in favour of the government) in the 2005 election. Pardoned and released in 2007, her pardon was later revoked and she was arrested again on December 28, 2008 to serve her life sentence. Amnesty International launched an international campaign for her release in November 2009. Recently she was named as honorary chair for the Ethiopia and Horn of Africa conference next week in Washington, DC.

Many others have also been imprisoned for political reasons in Ethiopia, and the Committee to Protect Journalists (CPJ) in 2007 name the country as "the world's worst backslider on press freedom over the previous five years." In January this year Ezedin Mohamed, the Ethiopian editor of the Muslim-oriented newspaper Al-Quds was jailed for a year for criticising Zenawi, the fifth journalist to be imprisoned there for similar offences.

As well as Ethiopians, the demonstration also included Somali opposition supporters opposed to Zenawi, sometimes called the "butcher of the Horn of Africa."

Human rights violations and corruption are rife in Ethiopia, and food aid, eeducation and jobs all depend on membership of the ruling party. His opponents regard Zenawi as a bloodthirsty tyrant and call for him to be brought to trial at the ICC at The Hague on charges of genocide.

Despite this, the Ethiopian regime still receives both substantial financial support for the USA and the EU. The Ethiopian government is the largest recipient of UK budget support in Africa. Human Rights Watch (HRW) have accused it of war crimes in the Somali regions of Ethiopia and against the Anauk communities in Gambella in 2003-4. As the protesters were saying, it is time for our government to think again and withdraw support from the regime. Ethiopia needs our aid, but it should not go through this corrupt regime.

This story with more photographs on Demotix:

http://www.demotix.com/news/291325/ethiopians-protest-bloodthirsty-tyrant
and in a day or two on My London Diary: