Dateline: Ian Tomlinson Vigil, Cornhill, London, UK, 10:55-11:40, Thu 01 Apr 10 – Scenario: Citizen A assaults Citizen B in broad daylight, on video, by striking with a blunt infantry weapon and by shoving Citizen B to the ground; minutes later Citizen B is dead.
Q: What happens to Citizen A?
A1: If it were you or I, no doubt we'd be banged up in jail.
A2: But if Citizen A is a body-armoured, weapon-carrying, riot cop... he gets away with murder, for over a year.
One year after their loved one was slain by unprovoked police assault, the family of Ian Tomlinson, their friends and supporters mourn his death with a vigil at the location where he died. 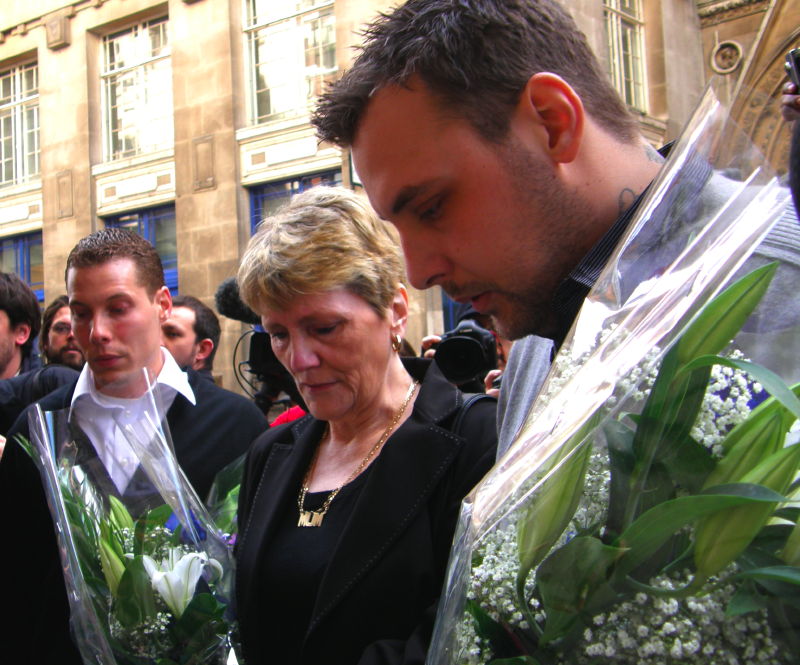 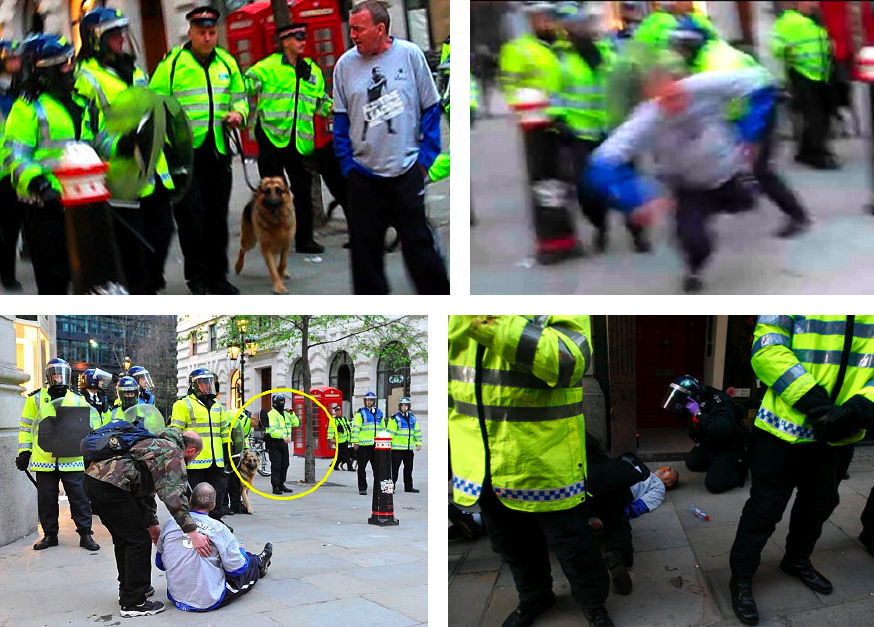 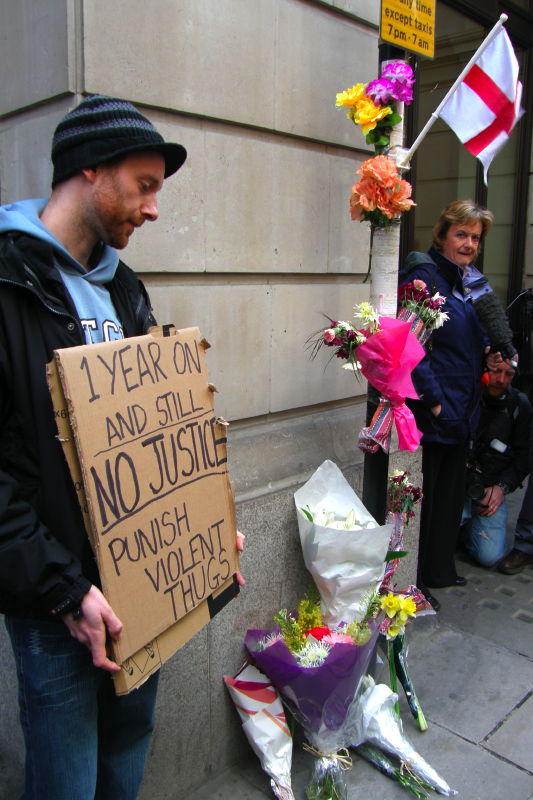 B1. No Justice for Ian 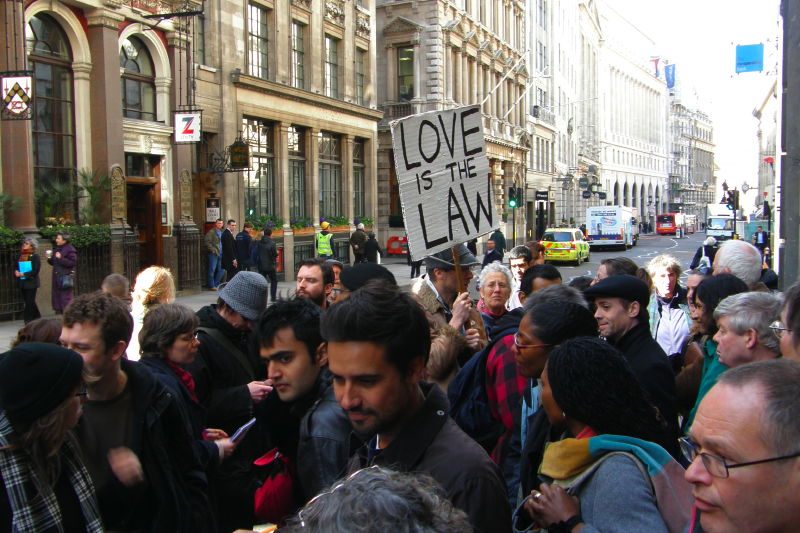 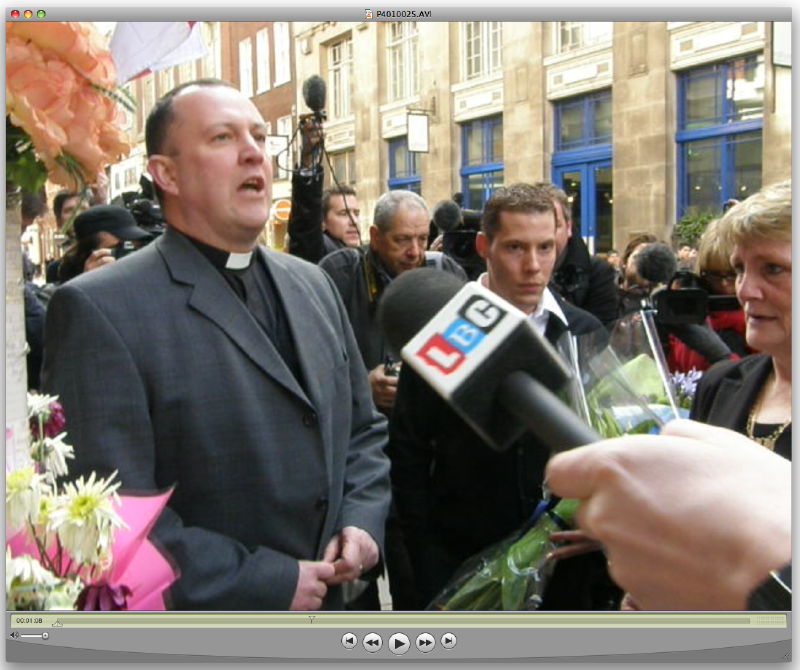 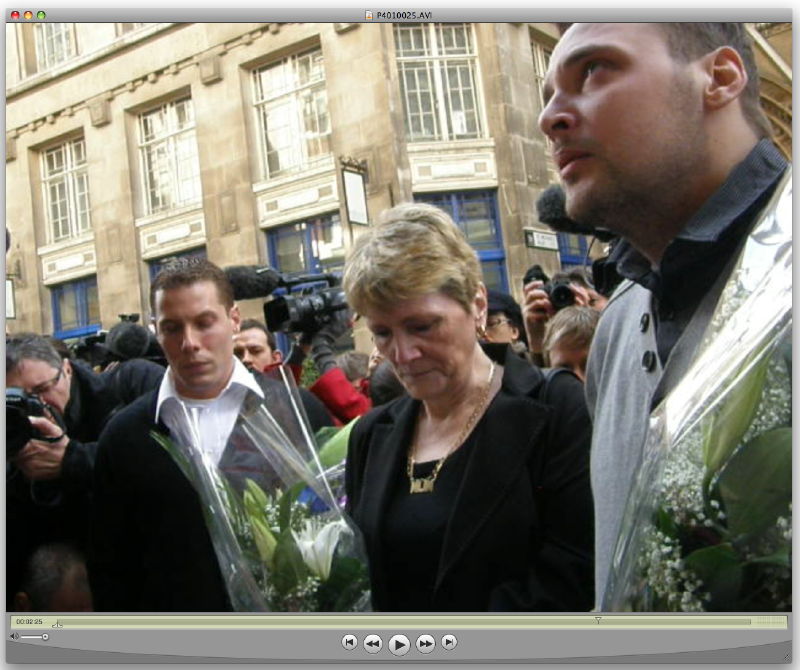 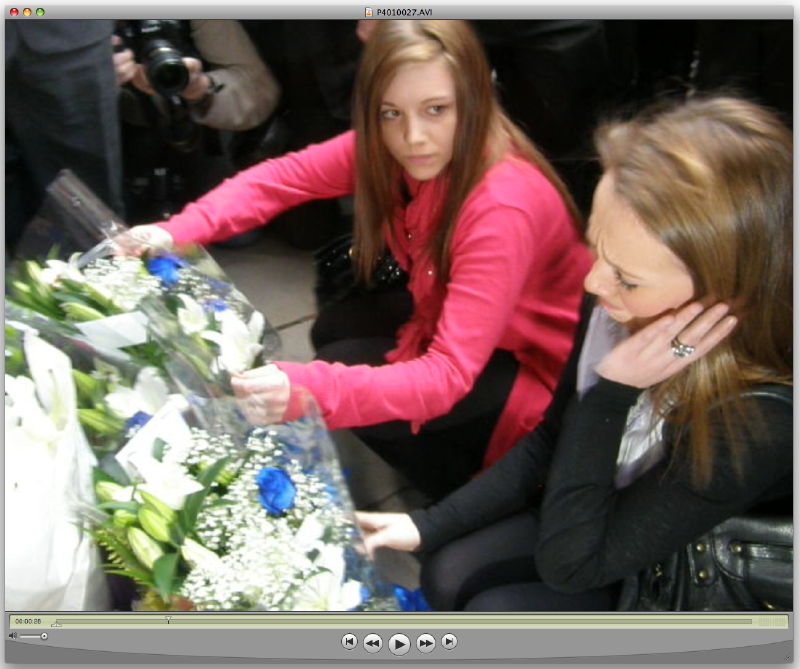 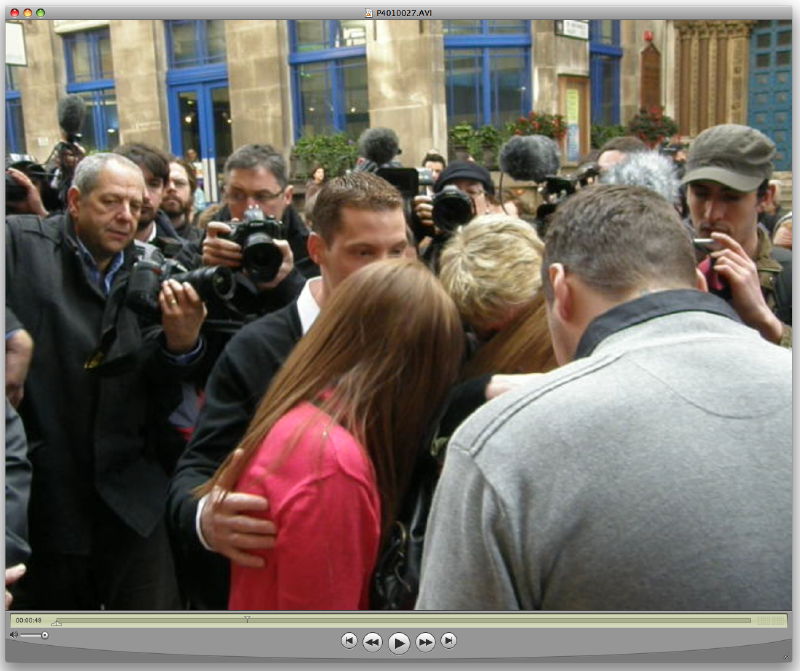 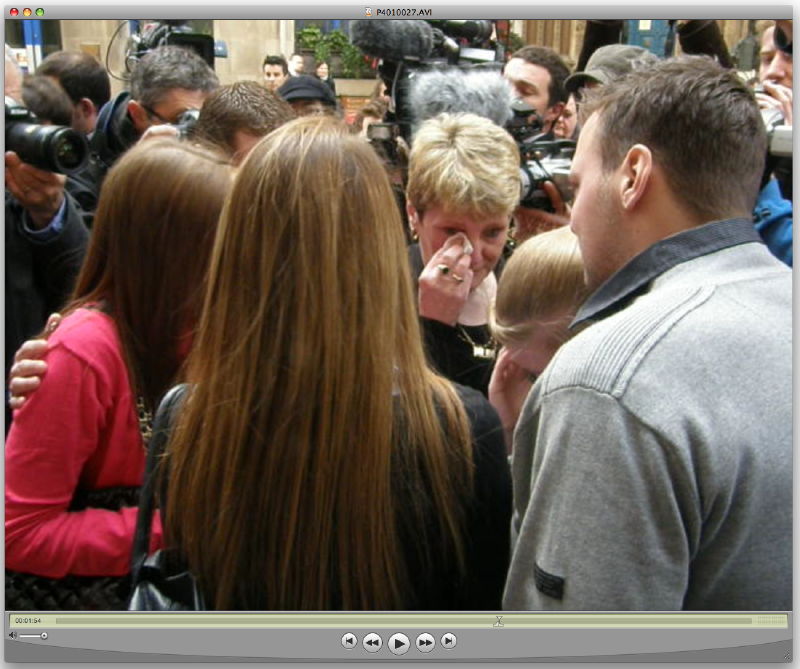 C5. "The Strength To Support Each Other" (video still) 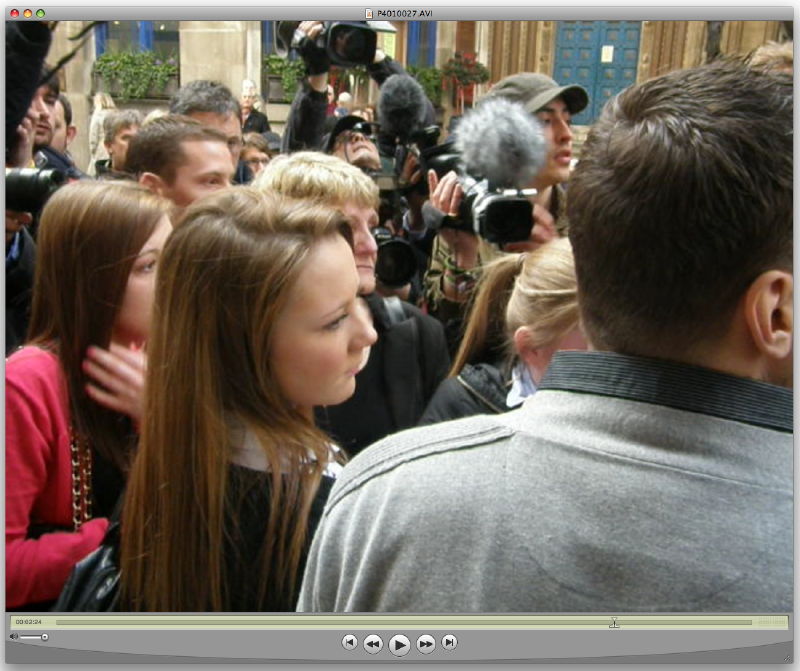 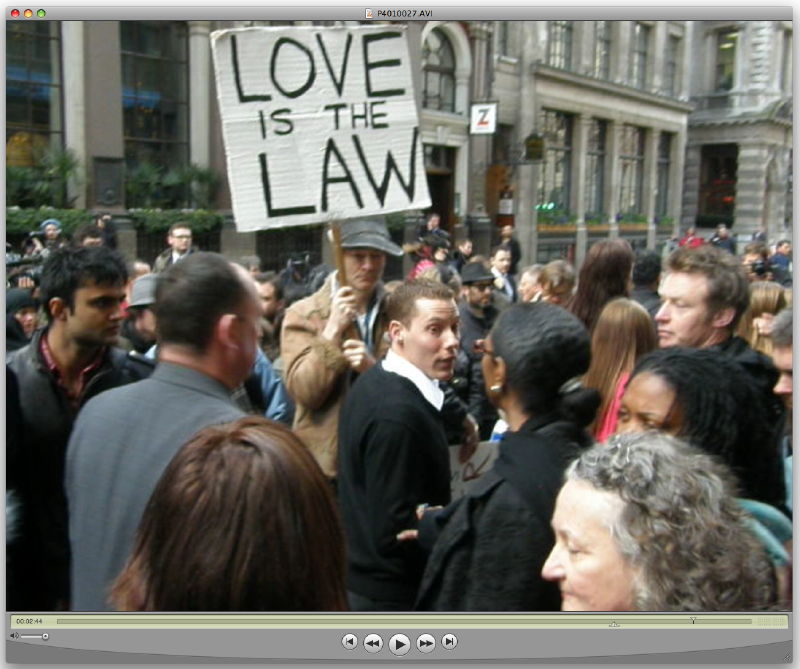 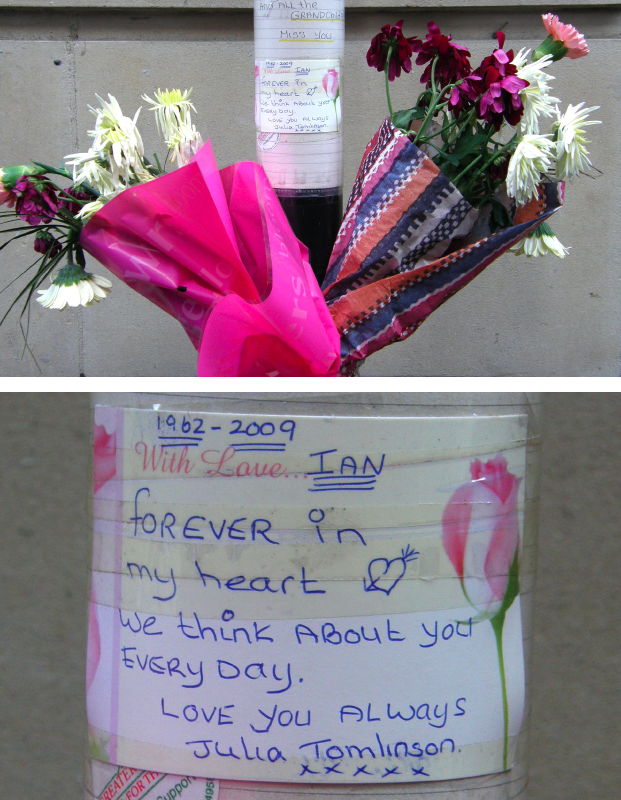 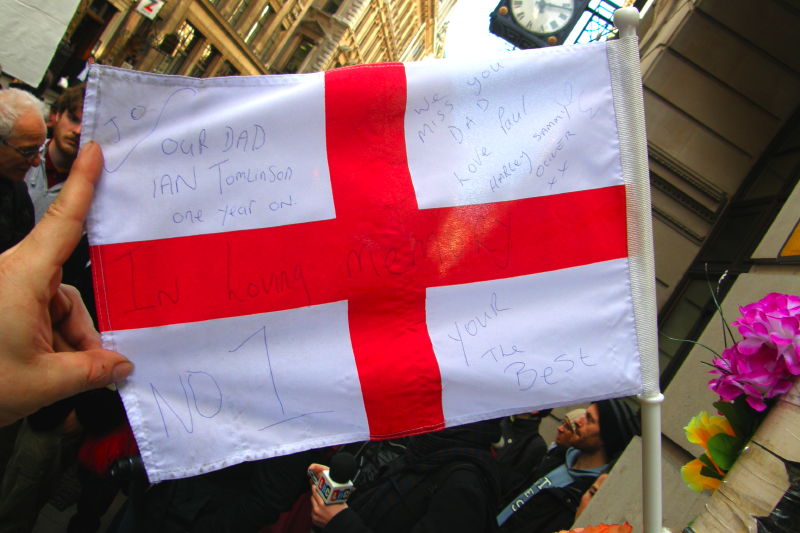 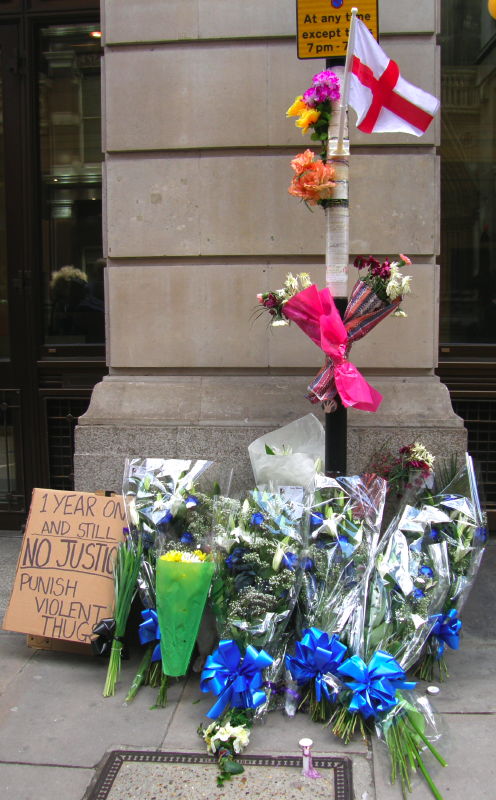 M3. No Justice, At Any Time 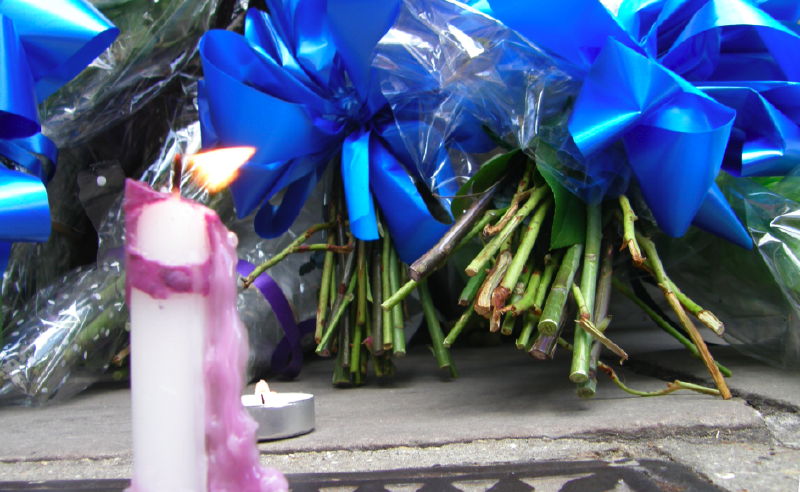 M4. Candles in the Wind


KILLERS ON THE LOOSE
There are killers loose on our streets, and they are well known to the police – because they are the police.

One year after a body-armoured, weapon-carrying, killer-in-uniform assaulted and killed our brother Ian Tomlinson, an innocent bystander caught up in the police assault on G20 protesters, his family are still waiting on official British justice.

"A year is a long time. Seasons come, and season to go. We have gone through summer, and autumn, and winter, and have returned to spring. We ask for support and care for Julia and the family. In a year of waiting, in a year of missing, in a year of longing, we pray for their friends and family to support them in their loss and grief. We pray that they may have the strength to support each other."
~ Rev. Phil Summers, Tower Hamlets Methodist church

"[Director of Public Prosecutions] Keir Starmer has let us down personally. Why did he say there would be a decision around Christmas? Why are we still waiting? My kids need to move on from this. They're left without a dad now and their lives have been turned upside down over the last year, especially the four girls. He doesn't seem to realise the pain we're going through. We feel like there was a cover-up from day one, and we didn't see it because we were nervous about the police. Now a year on it still feels like all of that is still going on. If it had been someone on the street, a civilian, who had pushed and hit Ian just before he died, and it was all caught on video, surely something would have happened by now. The officer needs to go before a jury. Let them decide what should happen to him."
~ Julia Tomlinson, widow of Ian Tomlinson


CROWN PROSECUTION SERVICE – ZERO CREDIBILITY, SO FAR
On the same day as the vigil, the family, friends, and supporters of justice for Ian Tomlinson had a letter published in the Guardian, which reads as follows.

• A year on, we still wait for answers about Ian Tomlinson's death
• The Guardian, Thursday 1 April 2010
» letter –

It has now been one year since the tragic death of Ian Tomlinson during the G20 protests in the City of London on 1 April. While we appreciate a fair and thorough investigation takes time, Ian's grieving family has been left in limbo for a year waiting for a full explanation about the circumstances of his death. There is now very real concern as to whether the Crown Prosecution Service (CPS) proposes to charge anyone in respect of the assault and death of Ian.

The CPS has been in possession of the provisional Independent Police Complaints Commission investigation findings since August 2009. We understand that these findings, at least in part, will provide the basis for a decision on whether to prosecute anyone for Ian's death. We also note that the director of public prosecutions said in a Guardian interview (21 September 2009) that he hoped the CPS would reach a decision "within a few months".

Delays in the investigation and charging decisions increase the suffering for families of victims leaving them unable to gain closure and move on with their lives. Families are greatly concerned not to prejudice the process and are therefore effectively silenced from expressing their views publicly about the death of their loved one. They are desperate to ensure any potential future legal proceedings are not undermined nor an excuse found to abandon any cases that might be brought. The Tomlinson family has endured a year of public scrutiny unable to respond to questions about Ian's death, with little they can do but wait for the outcome of a decision. The delay however is now intolerable.

The policing of the G20 protest caused widespread public concern around use of excessive force by police officers. Proceedings against many protestors arrested on the day, as well as a number of reviews and investigations into the events of the day, have all been concluded. In the case of Ian Tomlinson, there is a heightened need for the statutory investigating body to be seen to be carrying out justice in a robust, transparent and timely manner to address public confidence. One year later the public, like the Tomlinson family, are still left with unanswered questions about how and why Ian died at the G20.

As we have already set out, we do not wish to prejudice any investigation or potential proceedings but believe that either a decision or public explanation is due. We call on the CPS to fulfill its public duty regarding the investigation into the death of Ian Tomlinson.