The crews of US helicopters are cowards

and war criminals. As are the "Drone Killers". 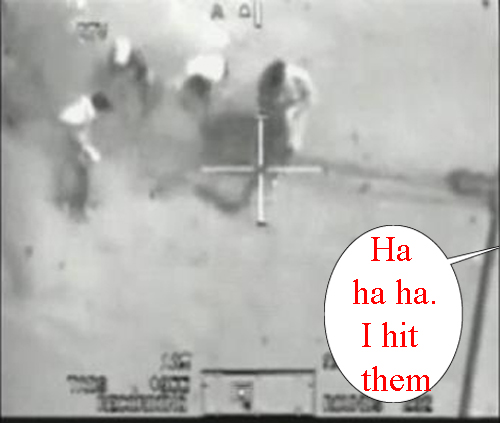 The crew of the helicopter “Crazyhorse” are war criminals.

"Ha ha ha. I hit 'em," shouts a crewmember as he kills civilians.

And now this is going on everyday in Afghanistan.

These war criminal cowards have to be stopped.

Mark Taylor an international law expert and a director at the Fafo Institute for International Studies in Norway, told Al Jazeera the evidence so far "indicated that there's a case to be made that a war crime may have been committed".

"It's the American authorities, the US military that has to take a closer look at this investigation.

"There are questions about the way the investigation was conducted and whether or not it was done in a proper manner," he said.

If the cold blooded murder of a dozen innocents is not enough for these blood-crazed psychopaths, they then open their 30mm helicopter canon on people who come to tend to a survivor. And make no mistake - this is no isolated incident. This kind of crap must go on ever damned day.

They blew up bombs on buses and flew planes into buildings to kill civilians.
They should also be brought to account

The leader of the Hands Off Iran group Yassamine Mather works for a British university research department that designs much of the BAe technology used in Apache helicopters and other sophisticated killing machines.

Below is a list of “ academic related staff” at the Aerospace Engineering department at Glasgow University as listed on the department’s website on 14 Nov . 2007

On 4 Dec ,2007 ,the day after the Study War No More Group published its report on BAe funding of universities, Y. Mather’s name had been removed from the list. That remains the case :Mather’s name does not feature on the department’s website list of staff members :

You can read what the Study War No More report said about Glasgow
University’s Aerospace Dept’s connection to BAe here.


HOPI supporters deny that Mather works where she does and give the name of Prof Peter Gawthrop ,a CND member , as a referee for Yassamine Mather saying that Mather’s work at Glasgow is confined to his Systems and Control Centre .

Gawthrop is in fact one of Britain's leading experts in the technology that goes into Apache’s design .

Look under Labs below listed in Yassamine Mather's Aerospace Engineering Dept's profile . Y Mather has never had anything to do with miltary related projects according to her defenders. Why then do westlandaugusta ,bae and other military contractors pay the bills for the research at the Aerospace Dept where she works and for Gawthrop's Systems and Control centre ?
Yassamine Mather
Departments of Aerospace Engineering
and Mechanical Engineering
James Watt (South) Building
University of Glasgow
Glasgow - G12 8QQ
E-Mail:

HOPI’s spokesperson in Ireland ,Anne McShane of the Communist Party of Great Britain , has said that Mather’s work at Glasgow University is confined to the Systems and Control Centre there, and has absolutely nothing to do with BAe .In fact Prof Gawthrop’s Systems and control Centre is heavily involved – industrially linked - with BAE and other arms manufacturers see:

Tom Eile has made some serious allegations about Yassamine Mather, one of our speakers on Saturday. He and some others have rather pathetically banded together to throw abuse against a campaign that they cannot attack politically. They mock the fact that Yassamine does not live in Iran, without stopping to consider why it would not be wise for such an opponent of the regime to go back there. Obviously they want to believe that the Iranian people are not repressed, or that leading trade unionists and activists are not in prison. In many repects the allegations that are being made are not worth answering. And to my mind the very fact that people like Tom Eile can try to besmirch the name of a leading left-wing Iranian dissident is truly shameful. He is doing the wok of the Iranian state and the US state for them.

But to deal with the issue of Yassamine Mather's so-called connections with BAE I state as follows:

Everyone in Glasgow University knows that Yassamine Mather has never been involved in BAE research contracts/grants . She has never undertaken research or contract work that involves the defence industry .
Of course it should be added that BAE is unlikely to accept someone born in Tehran
known as a leftist ativist as investigator or collaborator at any level (however junior) in one of their research contracts/programs .
Yassamine Mather's main research work at Glasgow university is with the Centre for the study of Socialist theory and Movements and the journal Critique of which she is deputy editor.

The Engineering research group she has any association with is Systems and Control group , the main well known academic in that group Professor Peter Gawthrop who is a member of CND , an anti war activist ( he spoke at anti war meeting, organised by Mike Gonzalez in Glasgow University exposing US claims that Saddam had weapons of mass destruction) This group is not involved in any BAE contracts and their research involves the following areas:
Intermittent Control
Applications to Human Motion Control
Applications to Mechatronics
System Identification
Bond Graphs
details in :

I hope that settles matters - well at least for those who want to listen.

Anne "
……………….
The Hands Off the People of Iran group needs to be investigated and challenged on their leader’s links to the arms trade. BAe has a long history of corruption and of infiltrating the anti war movement .

re: Terrorists are also war criminals

Not sure what point you are trying to make, seeing as this event was nothing to do with terrorists - other than the ones in the helicopter, of course.

And people who blow up buses or fly planes into buildings are brought to account, assuming they weren't killed in the process.

Maybe you feel this is so indefensible that you have to come up with some random fact as a misdirection? Just face it, this shows the US military being grade A fuckwits, and it's highly unlikely to be an isolated incident.

man, the US War Machine is so cool, it can give any man a hard-on!

But your not a man, how would you know?