Assassination of Reuters staff in Iraq. A US war crime.

Both Reuters journalists are dead, along with at least fifteen others. The Apache crew guide in ground troops to the scene and when the child is found, the crew casually dismiss the crime. Two Reuters journalists with exclusive access to the ground through their 'insurgent' contacts, who have long been a thorn in the side of occupying forces, lay dead. The Apache crew's primary work is done. The child, and the others, are collateral damage. 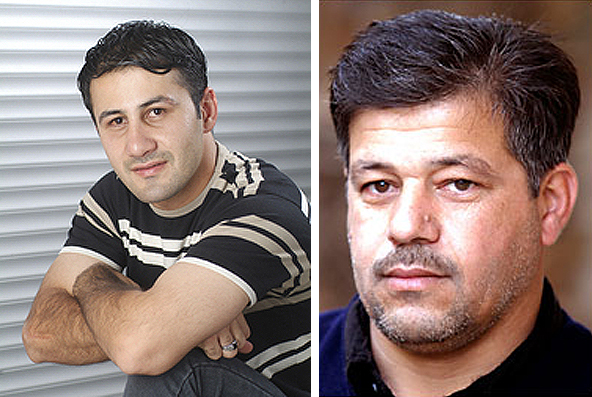 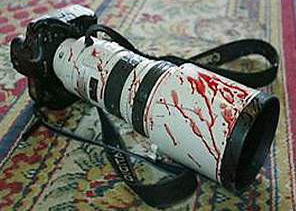 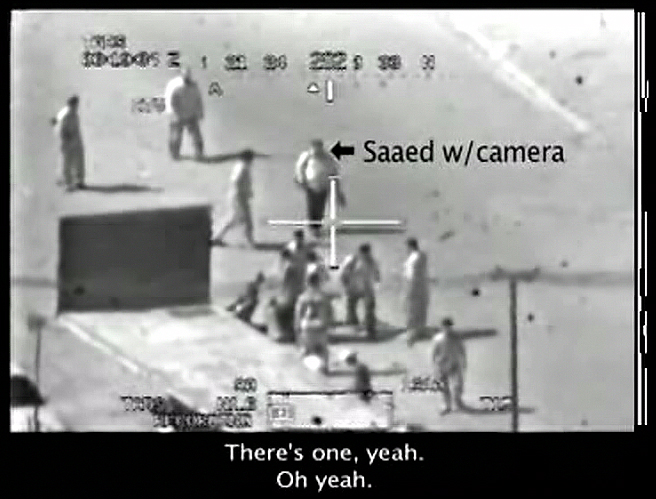 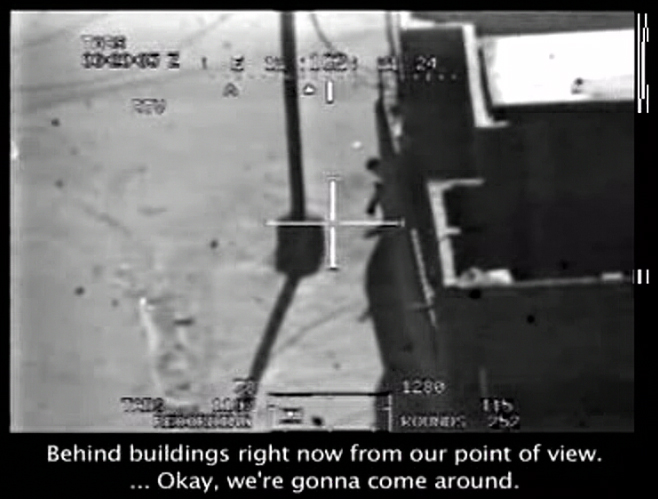 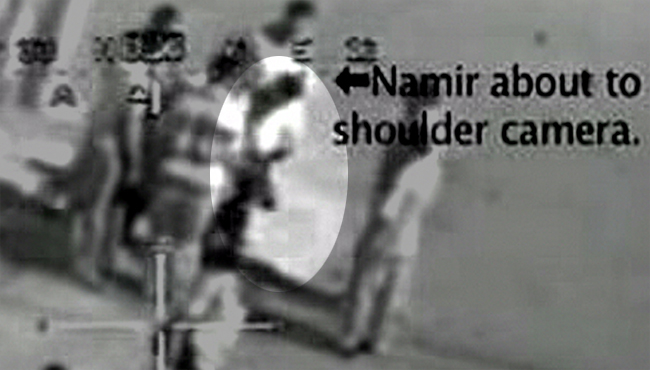 Namir looking at his work. 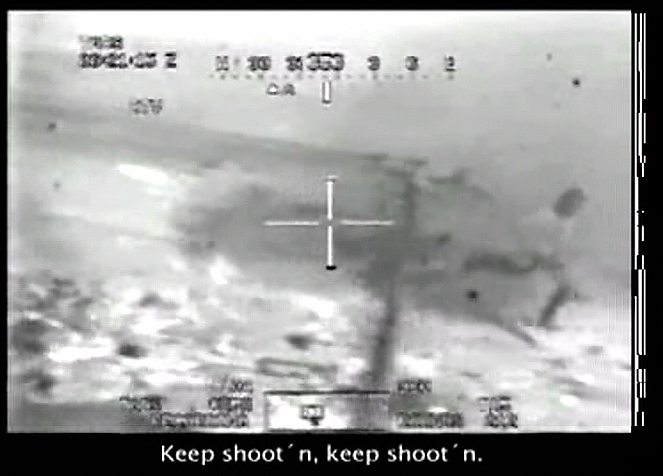 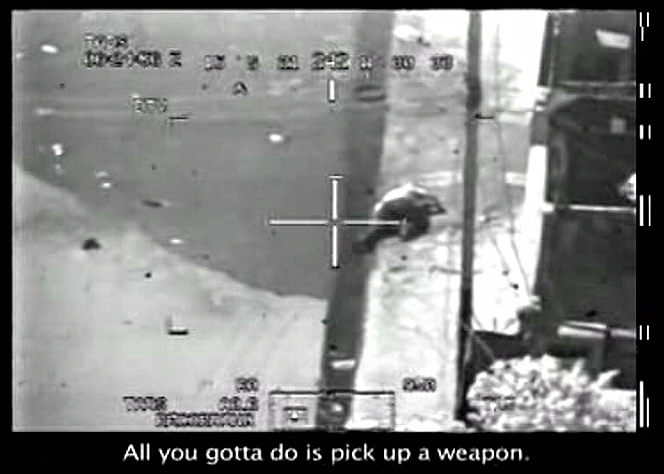 Saeed survives but is wounded. 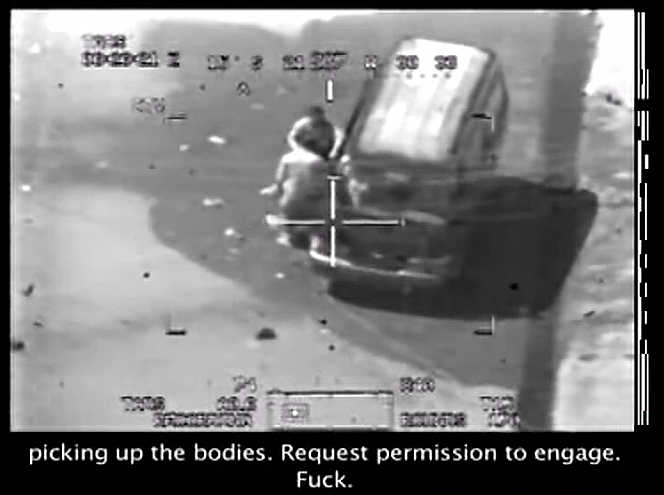 Fuck, were losing him. 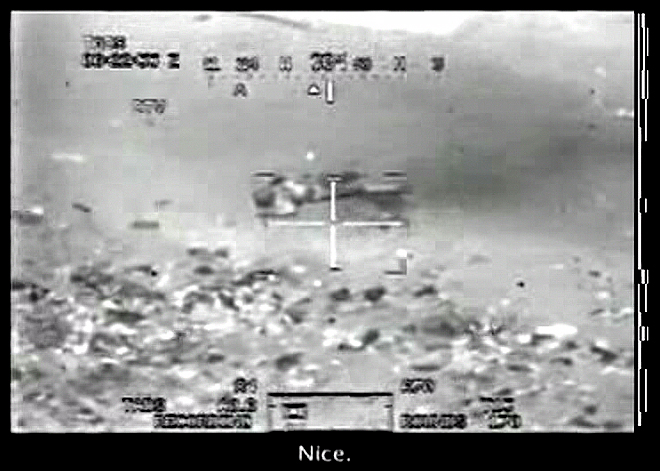 Namir Noor Eldeen, 22 and Saeed Chmagh, 40 died two years ago at Al-Amin al-Thaniyah in Eastern Baghdad in war torn Iraq. Namir, a talented and well known photographer had been recruited by the US based Reuters news agency for his knowledge of the the area, he was embedded in a position of trust with so-called insurgents. He had developed a reputation for being fast into the scene of the action and had been a source of much irritation for the occupying forces. Saeed had been employed as his driver and fixer.

They were working together gathering evidence of US crimes in the region and had developed reputations that were steadily becoming more and more noticeable. On the morning of 12th July 2007, both men were reported killed by Reuters. On this day, the two men were being taken by their contacts to the scene of a building in which a number of Iraqi's had been killed that morning by US troops during a dawn air-strike. US forces had remained throughout the day and were still at the scene when Namir and Saeed arrived.

At the time, it became immediately apparent that the men's deaths were curious. Local Iraqi police explained the deaths as being the result of a 'random American bombardment', the US Army claimed they had died during a 'firefight with insurgents'. Local witnesses expressed surprise and confusion. No Insurgents had been seen in the area on the day claimed and few could give any insight into what had happened at all.

In an attempt to get to the truth, Reuters had demanded access to the Apache helicopter gunships video recorders, the return of Namir's camera's and copies of the written testimony of all those present. The following Sunday after the announcement of the two men's deaths, Namir's camera was returned. The digital card still in the camera showed no insurgents, no battles, no deaths or wounded, no panic in the streets.

“One picture on Noor-Eldeen's wide-angled lens camera was taken from behind a window that has a bullet hole in it. Two old women dressed in black are walking towards the window. Other pictures on the wide-angled lens camera show what appears to be the aftermath of an earlier shooting incident. The images can be timed from the camera's internal digital clock.”

“Around this time, Noor-Eldeen's long-angled lens camera shows four frames of a U.S. military humvee at a crossroads."

“What appears to be the last picture taken while Noor-Eldeen was alive is on his wide-angled lens camera. It came some 10 minutes after he photographed the two women.”

“The picture shows the top of someone's head who appears to be falling to the ground or crouching as dust sprays off the top of a wall.”

“Some 20 minutes later several shots on the wide-angled lens camera show the lower legs of a U.S. soldier and another soldier's shadow. It appears the camera is being carried and being bumped by a leg, resulting in several frames being shot.”

“More than three hours later, two more pictures were taken on the wide-angled lens camera. They show a slightly out of focus American soldier sitting in what appears to be a barrack.”

The images were the last the photographer had taken. Both Namir and Saeed were among three journalists killed that week, a third, unnamed man working as a translator had been killed in the same week bringing the total deaths of Reuters employees to five since the invasion in 2003. Two other Reuters men, a Palestinian and a Ukrainian had also been killed by US Troops. In every case, US military spokesmen had insisted that they had acted lawfully.

On Monday, 5th April 2010, after two years of infighting between Reuters and the US Army, the whistle-blower website Wikileaks aquired the digital file of the electronic recording device of the Apache helicopter. The file was decoded and published.

What follows serves as a disturbing insight into the continuing war in Iraq and the measures that are taken by the US military to prevent the truth of its squalid war from being told..

On the morning of the 12th July 2007 both Namir and Saeed were in a derelict side street in the Al-Amin al-Thaniyah district of Eastern Baghdad. Both Namir and Saeed were carrying camera equipment with them. As they walked, US troops in the area were carrying out an operation to secure and clear an area that was throwing up small arms fire. They had been present in the area since dawn. Overhead, two Apache gunship helicopters were assisting them. As Namir and Saeed walked through the street with a group of Iraqi's the call went out on the US radio communications system that a group of Iraqi's had been seen walking and that one of them had a weapon. Above, a US Apache helicopter, hovering close by, received the call and responded by flying to the scene. As the helicopter arrived, Namir and Saeed can be seen walking along the street.

The camera's they are carrying are identified as weapons by the Apache crew immediately and without hesitation. With Namir and Saeed walk a group of around 15 men. Two of them appear to be carrying weapons but one, upon examination, is walking with a swagger and the supposed gun he is carrying sways and bends with the motion of his stride. It is in fact a shirt, jacket or piece of clothing. Another man is holding a large straight and solid object that is routinely taken as an RPG (Rocket Propelled Grenade) launcher. Despite this the man holding this object exhibits no awareness that he can be seen by either of two Apache helicopters.

He is calm and obviously unconcerned by the military operation unfolding around him. The Apache crew decide that he is carrying a weapon but their primary focus is on Namir and Saeed.

Namir breaks away from the group and leaves Saeed a little way behind. He approaches a building and, as most professional photographers are inclined to do, kneels down and prepares his camera to take shots of the Apache hovering in the distance. He is behind a wall and offers little or no profile to the gunship as he takes his pictures. A common and routine caution. The Apache moves around in a circle and re-approaches the group from the rear. As it regains a clear line of sight with the group, Namir can be seen examining his images via the digital screen at the back of his camera. He is surrounded by the other men in the group.

The Apache again identifies Namir in amongst the group and the gunner opens fire. In an instant, the group is smothered by cannon fire as 30mm rounds explode amongst them. All the members of the group fall dead, Namir stumbles in a panic away from the scene but the Apache cannon follows him. He dies in a hail of smoke and dust. As his body lays on the ground, the Apache gunner relentlessly continues on and on firing egged on by his pilot.

Saeed escapes but is injured. As he stumbles away from the scene the cannon finds him and he falls to the ground. The Apache follows and sweeps the scene and confirms Namir as dead, but Saeed is still alive. The Apache concentrates on Saeed. As it sweeps around in an arc the gunner can be heard wishing for Saeed to reach out for a weapon. As the Apache swings around further Saeed is obscured behind a wall. The Apache crew have lost their chance, for the moment.

As it reappears and gains another line of sight at Saeed, another man is crouching down and trying to help. In the road, a small van carrying children drives into view. Another man runs along the street toward the scene. The Apache crew are not finished.

The van stops and one of the rescuers runs around to open the passenger door. He returns to Saeed and the two men, now joined by the driver, lift him and carry him to the van. The Apache gunner says “Fuck”.

Saeed is almost out of the scene and away. The Apache gunner desperately asks for permission to engage. He receives it and the ground around the van ruptures into smoke and dust. The two rescuers stumble away from the scene and die under the cannon fire of the second Apache. Inside the van, one child is dead and another injured. Saeed's body lays in the street dead.

Both Reuters journalists are dead, along with at least fifteen others. The Apache crew guide in ground troops to the scene and when the child is found, the crew casually dismiss the crime. Two Reuters journalists with exclusive access to the ground through their 'insurgent' contacts, who have long been a thorn in the side of occupying forces, lay dead. The Apache crew's primary work is done. The child, and the others, are collateral damage.