Here is a new graphic for the BP Fortnight of Shame which people can use, and a report of a BP action in Plymouth. 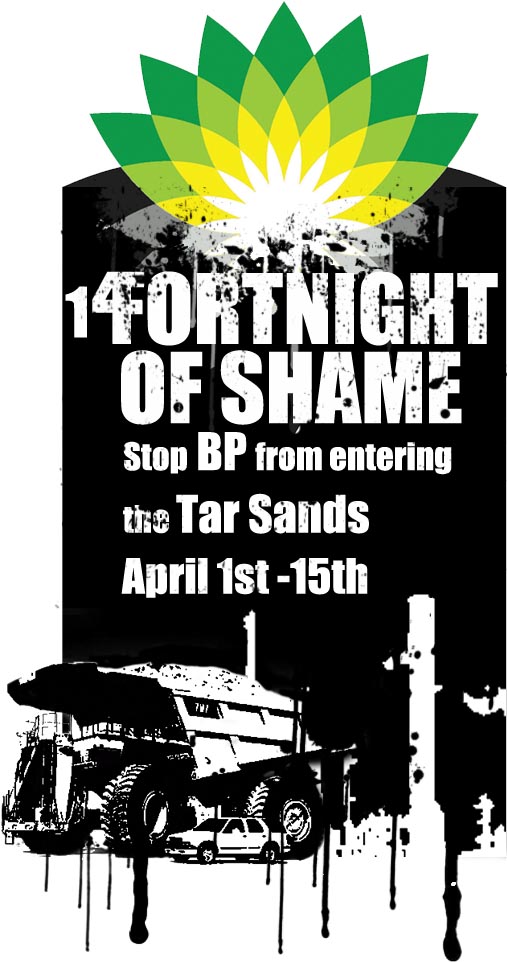 If you want to get involved with Tar Sands events and actions come along to the PARTY AT THE PUMPS.

Two women chained themselves to petrol pumps at a Plympton garage yesterday in a protest aimed at petrol giant BP.

The two women locked themselves to pumps at the BP Chaddlewood Service Station garage in Ridgeway after 2pm in a demonstration against BP's investment in tar sands oil.

Tar sands is a type of heavy bituminous oil found chiefly in Canada and Venezuela which has been criticised by environmentalists. They claim the extraction process generates two to four times as much greenhouse gas per barrel of product as conventional oil refining.

Six people from the Plymouth Rising Tide (PRT) and Kernow Anarchist Network groups demonstrated, but only two chained themselves to pumps while the others handed out leaflets and held banners.

The station, which is run by a franchise but supplies BP petrol to customers, was shut during the protest.

Sarah Mana, of PRT, protested but was not one of those arrested. "We saw it as necessary to make a radical call," she said.

A BP spokesman said: "We support the demonstrators' right to express their views, but not to put their lives or the lives of others in danger.

"Our prime concern was the safety of staff, customers and the site. We apologise to our customers for any inconvenience this caused."

Two people were arrested by police in connection with the incident.