Sheriff Scott throws out charges of racism against SPSC

The charges of “racially aggravated conduct” which were levelled at the 5 members of the Scottish Palestine Scottish Camapign were thrown out by Sheriff James Scott at Edinburgh Sheriff Court on Thursday 8th April 2010. 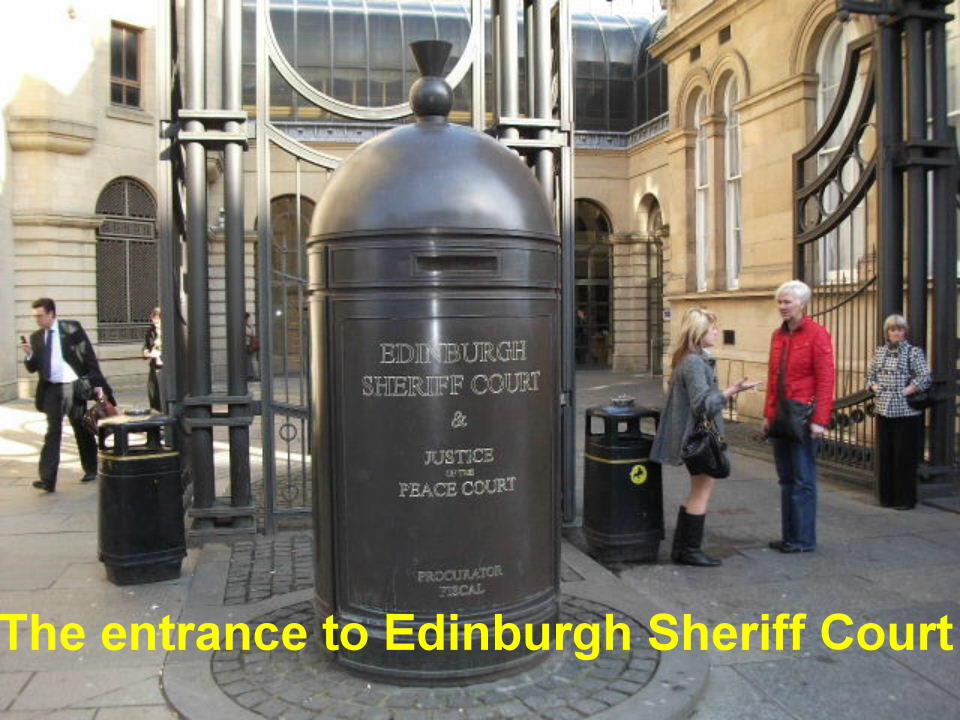 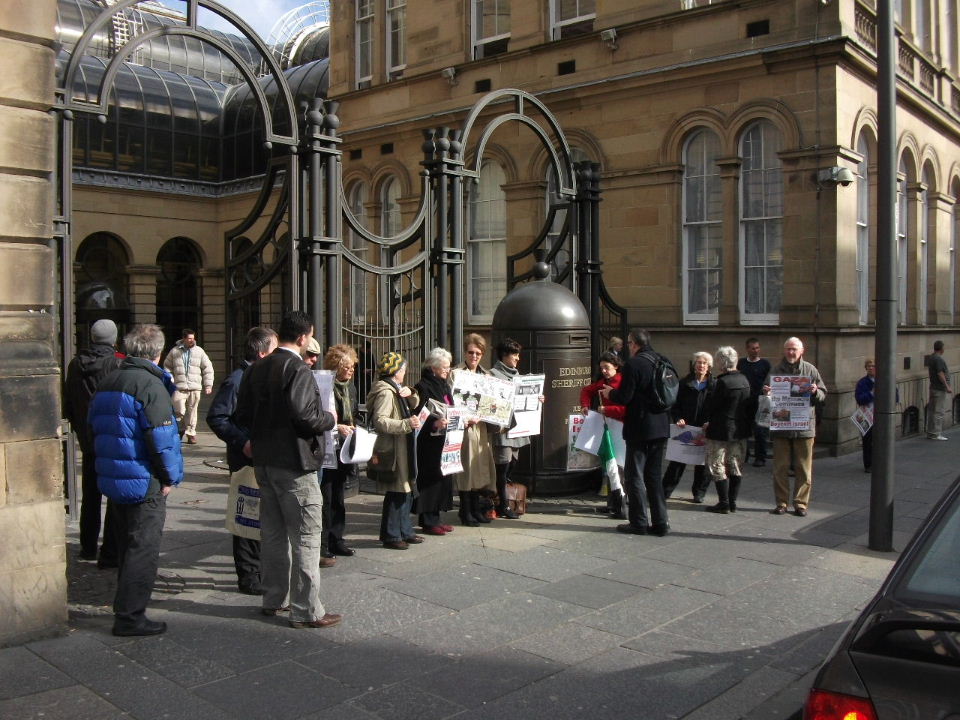 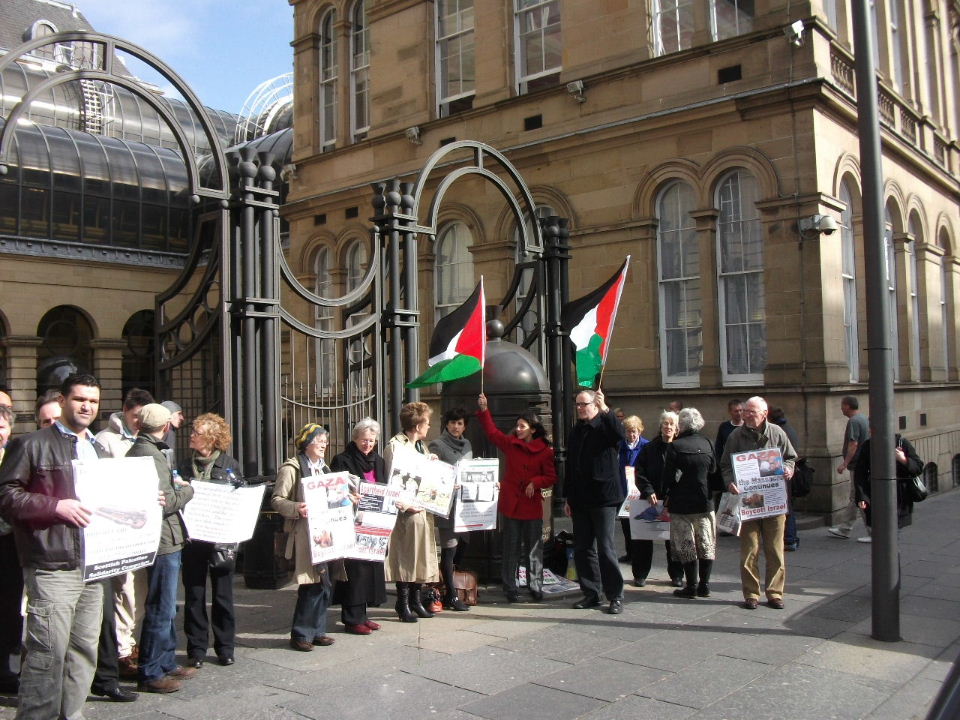 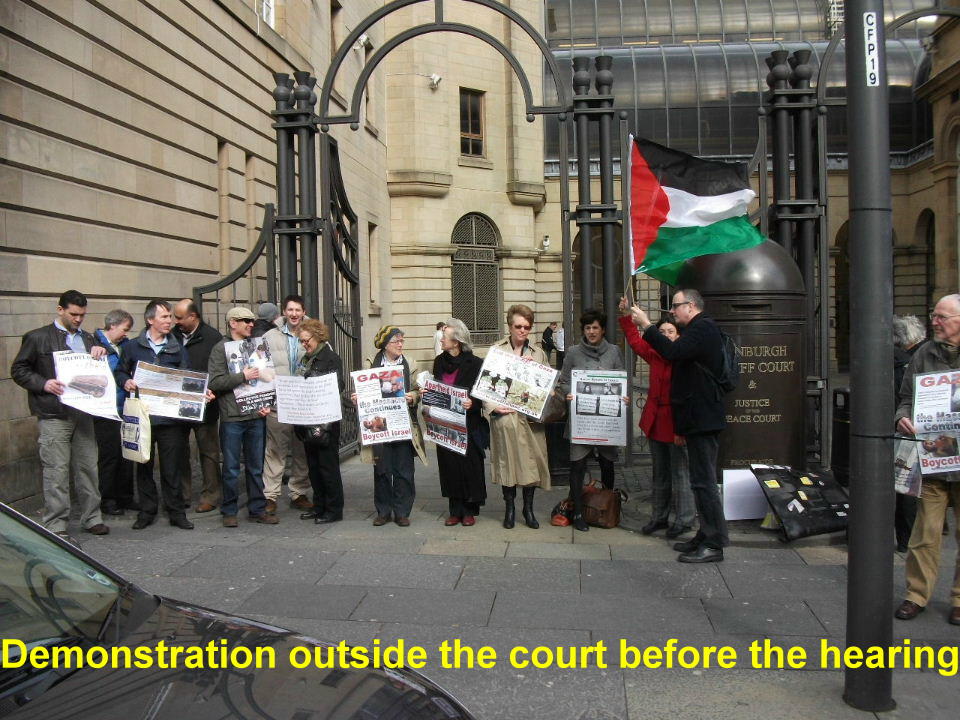 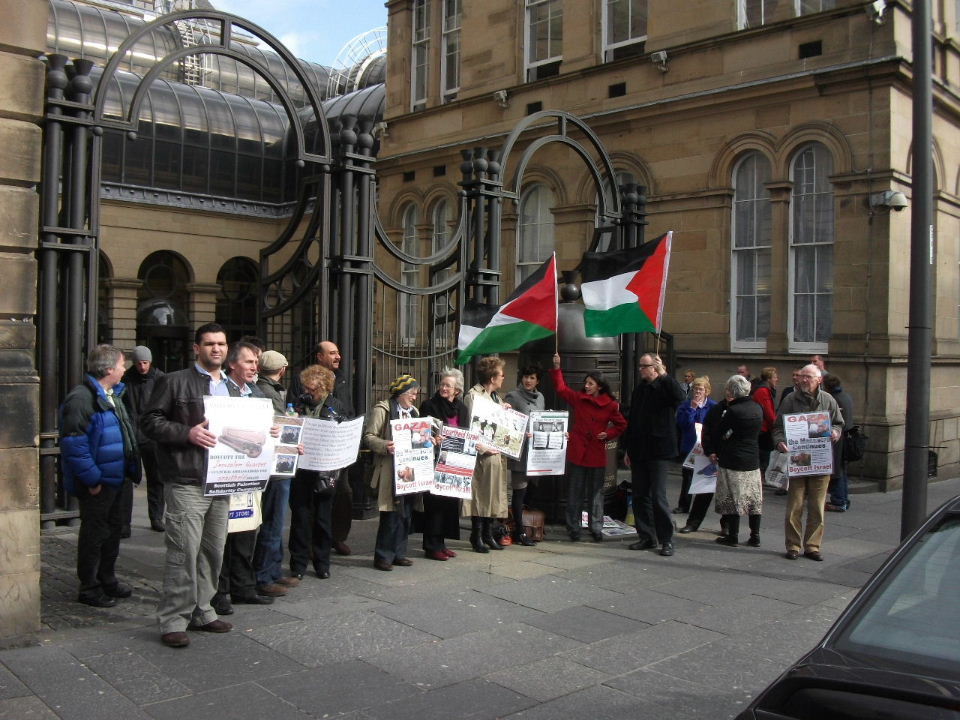 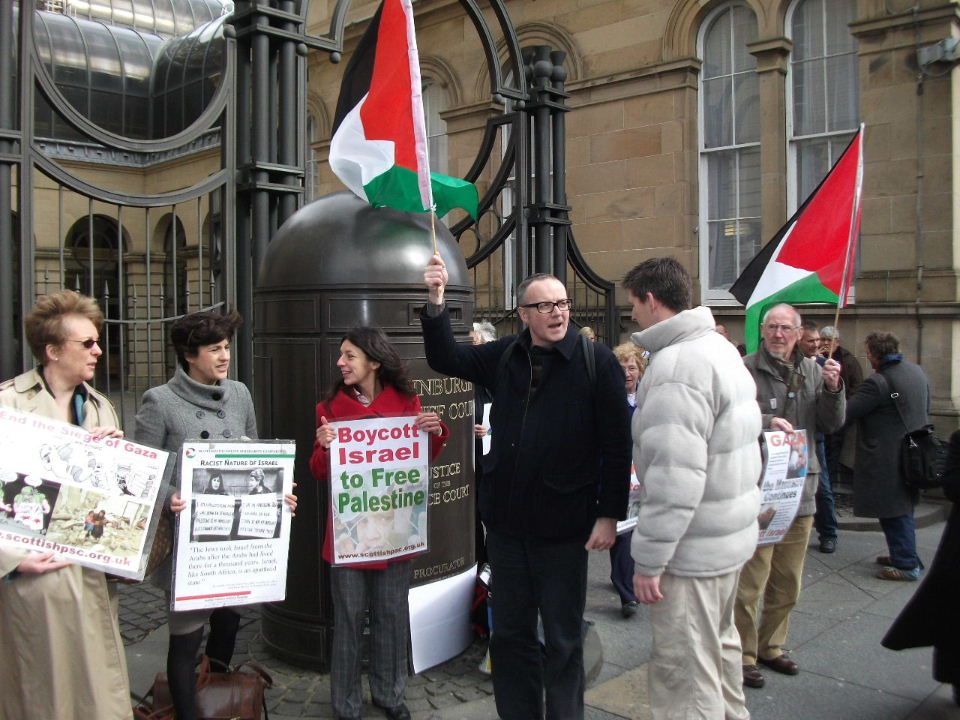 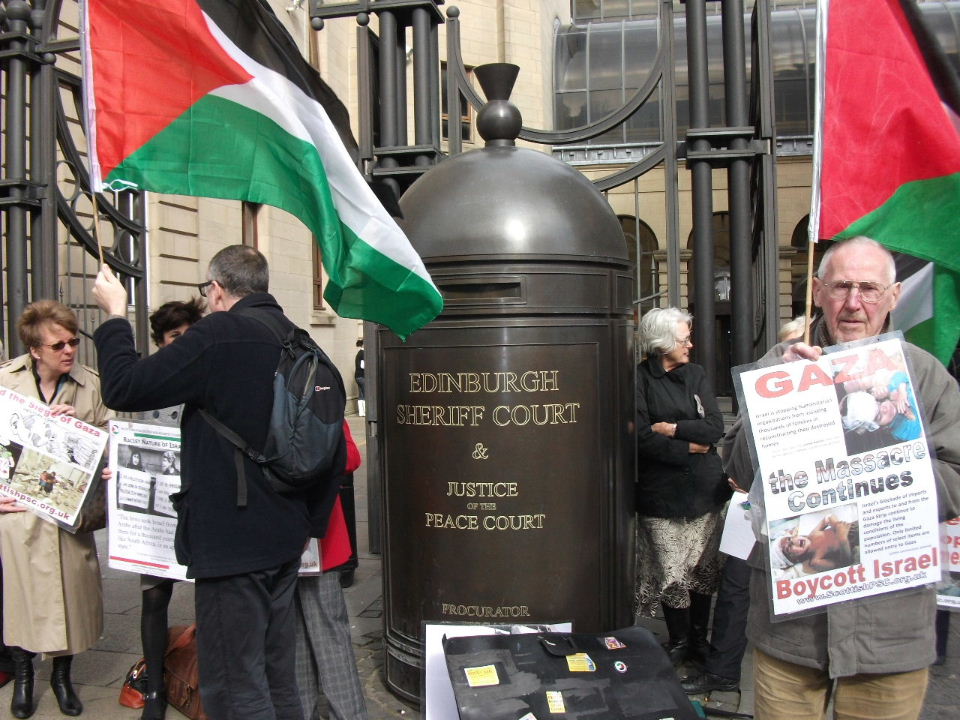 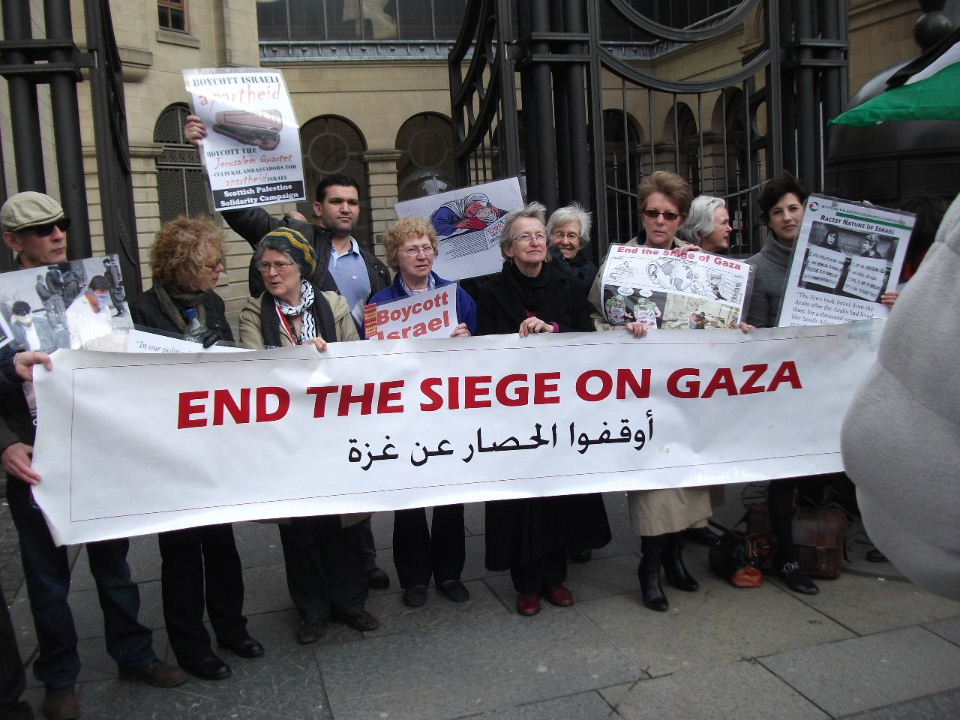 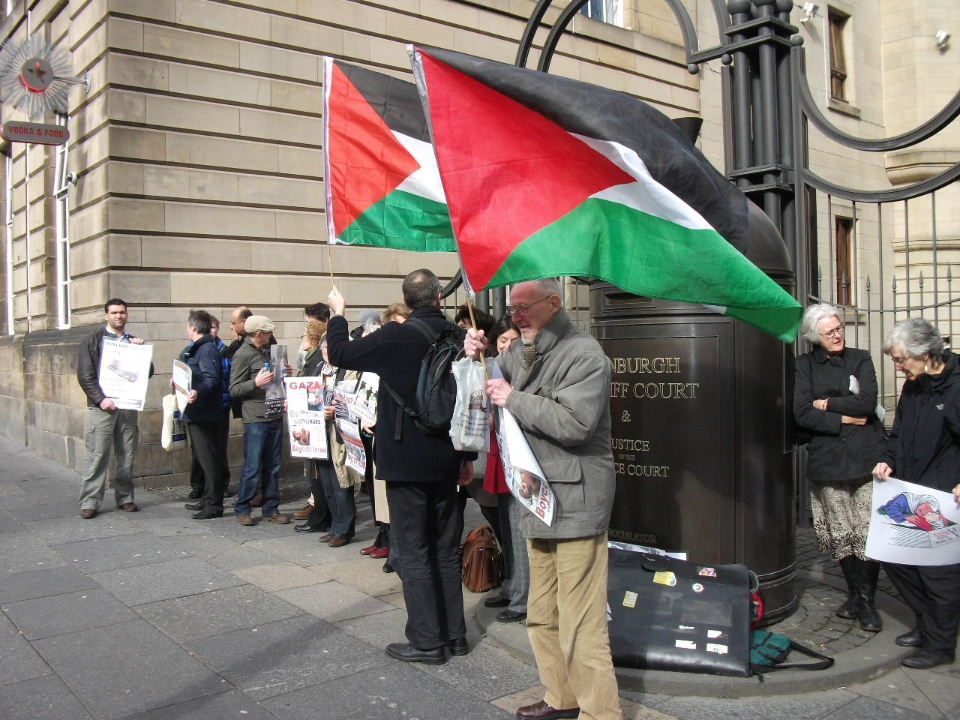 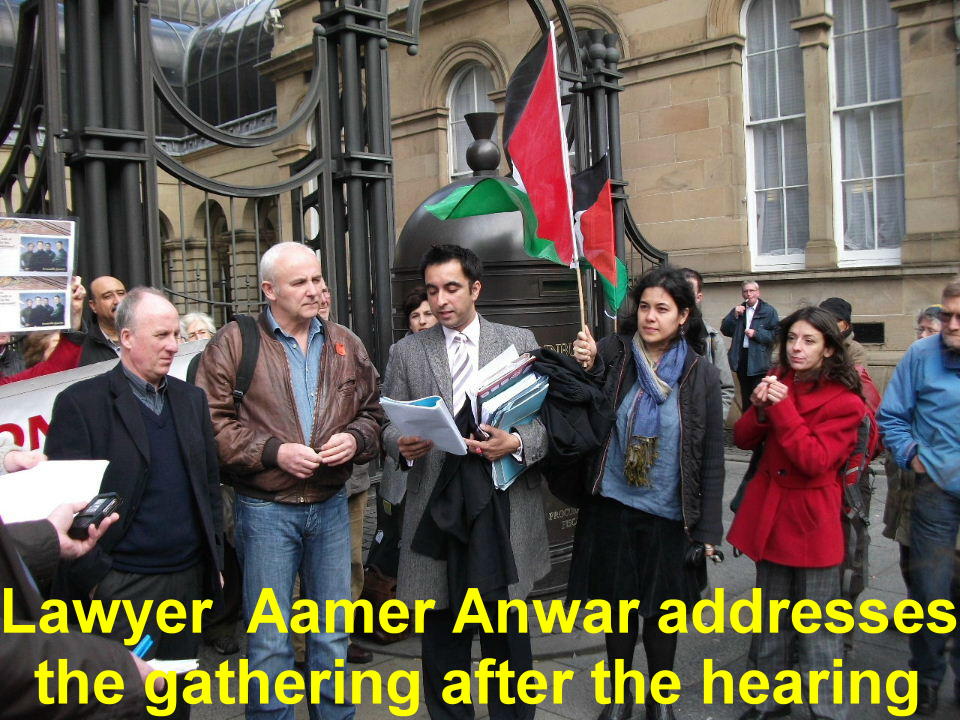 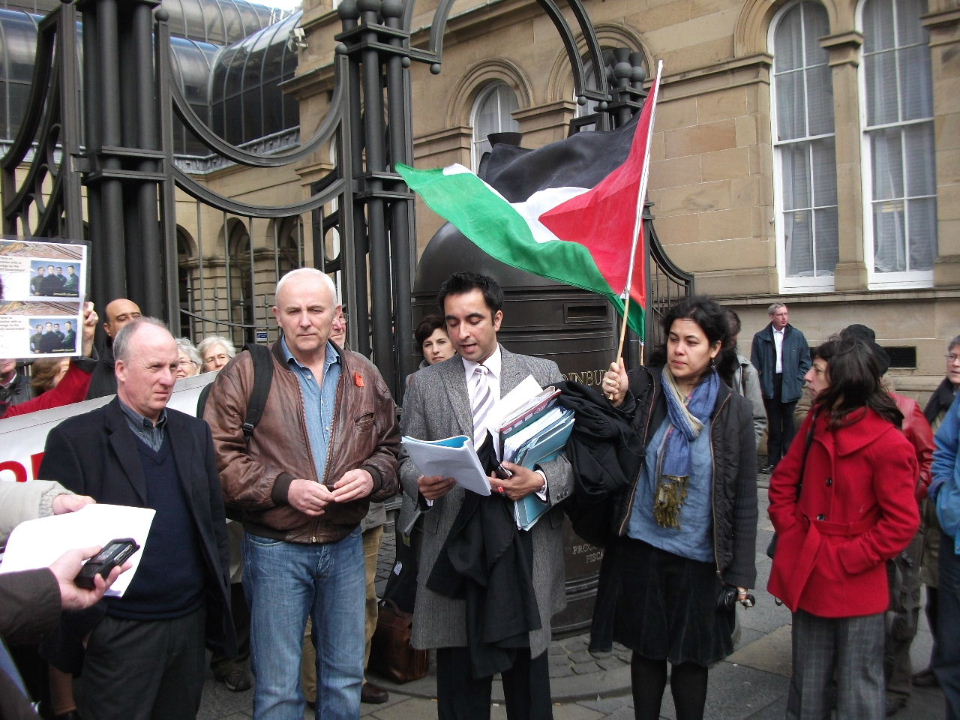 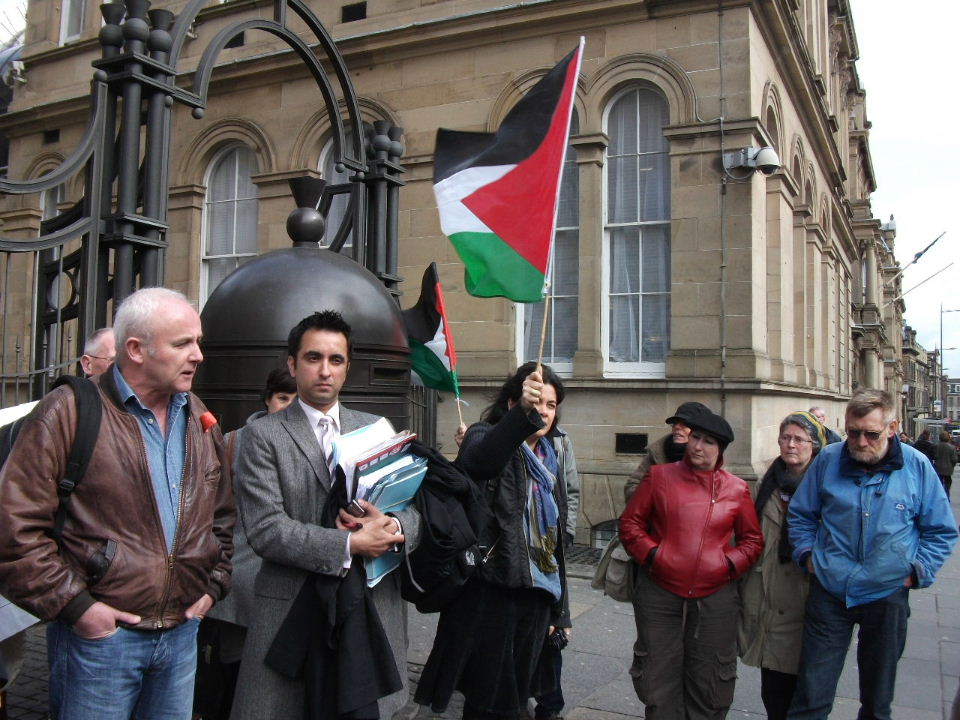 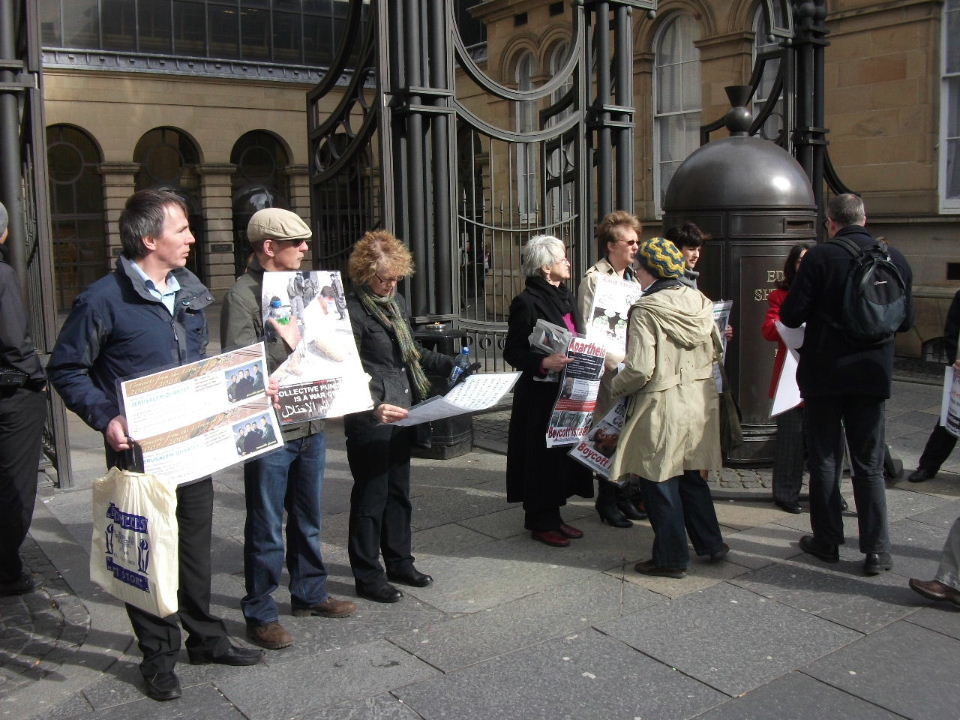 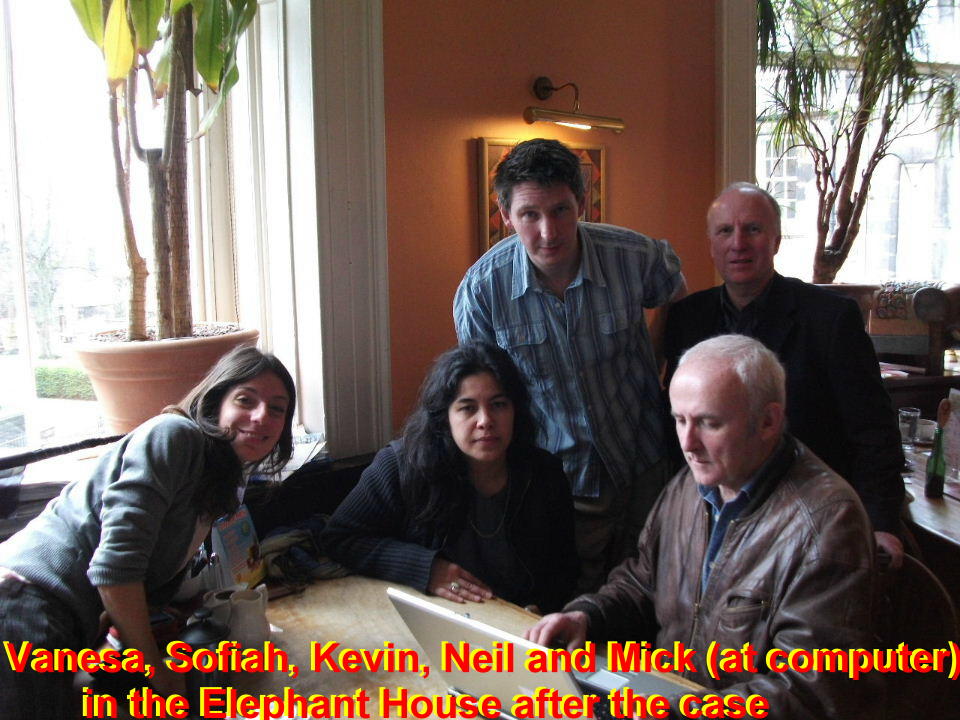 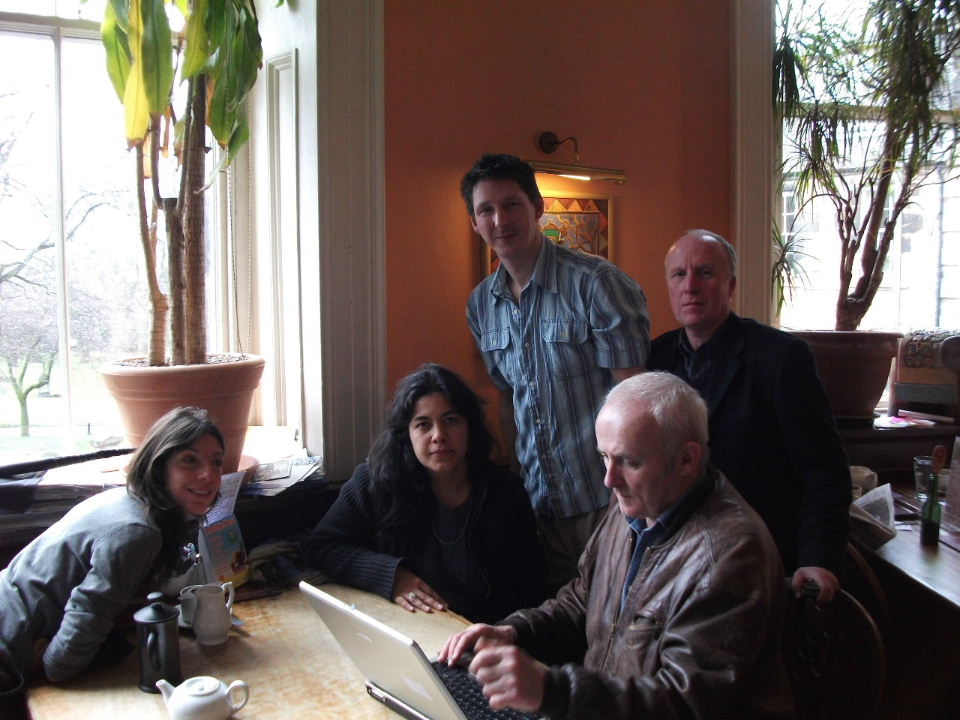 
The charges of “racially aggravated conduct” which were levelled at the 5 members of the SPSC were thrown out by Sheriff James Scott at Edinburgh Sheriff Court on Thursday 8th April 2010.

The 5 members of the Scottish Palestine Solidarity Campaign had interrupted a performance by the Jerusalem Quartet at the Edinburgh Festival in August 2008. They were initially charged with breach of the peace and held in police custody but were released to face a different charge of 'aggravated racism'.

The campaigners had been accused of making “comments about Jews, Israelis, and the State of Israel”, but during a three-day legal debate at Edinburgh Sheriff Court, a BBC audio recording of the event revealed that there had been no reference made to “Jews”. Comments included “They are Israeli Army musicians”, “End the Siege of Gaza”, “Genocide in Gaza”, and “Boycott Israel”.

Sheriff James Scott ruled that “the comments were clearly directed at the State of Israel, the Israeli Army, and Israeli Army musicians”, and not targeted at “citizens of Israel” per se. “The procurator fiscal’s attempts to squeeze malice and ill will out of the agreed facts were rather strained”, he said

The Sheriff expressed concern that to continue with the prosecution would have implications for freedom of expression generally: “if persons on a public march designed to protest against and publicise alleged crimes committed by a state and its army are afraid to name that state for fear of being charged with racially aggravated behaviour, it would render worthless their Article 10(1) rights. Presumably their placards would have to read, ‘Genocide in an unspecified state in the Middle East’; ‘Boycott an unspecified state in the Middle East’ etc.

“Having concluded that continuation of the present prosecution is not necessary or proportionate, and therefore incompetent, it seems to me that the complaint must be dismissed.”

Mr Fraser, the Procurator Fiscal Depute, said he would be appealing the ruling


The court proceedings had taken a very long time to come to this conclusion. The event had happened in August 2008 – nearly 2 years previously and there had been an estimated 17 court appearances with many farcical delays.

There were elements of farce in the court procedures of the final day of the hearings with a courtroom policeman forbidding the taking of notes except for 'accredited journalists' (whatever that means) and even ordering a lady to take off her beret in court for some unspecified reason.

The Sheriff made a joke over the similarity of the words 'officious' and 'official' to which there was some laughter, at which point one of the court officials sternly rebuked those present with a shout of “Silence in court!”
Would it have been more appropriate for the audience NOT to have laughed at the Sheriff's joke or would this have been construed as “Contempt of court, you did not laugh at his Lordship's joke!” One could imagine a stand up comedian like Billy Connolly having a field day with such material.


The ruling did receive a good deal of press coverage with detailed reports appearing on the BBC Scotland website, the Guardian newspaper, the Times newspaper, the Edinburgh Evening News and there was even a reporter present from the Jewish Chronicle.


The Independent of Thursday April 1st 2010 mentioned the Edinburgh protest in a an article about the disruption of a Jerusalem Quartet performance in London:

'The Jerusalem Quartet have faced such protests before, as far as Australia. IN FACT, THE DATE OF THIS CONCERT, 29 MARCH, ALSO HAPPENED TO BE THE DAY WHEN A GROUP OF PROTESTERS – FIVE MEMBERS OF THE SCOTTISH PALESTINE SOLIDARITY CAMPAIGN – WERE APPEARING IN COURT FOR DISRUPTING A PERFORMANCE BY THE QUARTET IN EDINBURGH IN AUGUST 2008. The problem, it seems, is a result of the group's name and their being perceived as cultural ambassadors for Israel, with Jerusalem Music Centre's website stating: "The four members of the Quartet joined the Israeli Defense Forces in March 1997 and are serving as Distinguished Musicians." Of course, military service is compulsory for any Israeli citizen at the age of 18. Even violin virtuoso Maxim Vengerov served for a short time in the IDF.

Still, as classical music writer for The Independent, Jessica Duchen, states in her blog, association with the IDF leads to inevitable presumptions. "That doesn't mean they're not great musicians. It's a horrible dilemma if you love their playing but hate what their government is doing. My first reaction to the targeting of small cultural groups such as the quartet, or the Choir of Clare College, Cambridge which was bombarded with angry correspondence when planning a tour to Israel, and so on, is that it's a deeply distasteful form of bullying: they're easy targets. And in the end it's not going to make a blind bit of difference and will simply reflect badly on everybody concerned. It would be much more difficult to hit where the difference would really be made: heckling Mr Obama about the billions that the US gives Israel every year." '

Here is how the Times newspaper reported the court case:


The same newspaper also had this comment from Lindsey MacIntosh:


' The Jerusalem Quartet's concert at the Edinburgh Festival in 2008 was the scene of a protest by the Scottish Palestine Solidarity Campaign. But music has also been the means to create harmony across the Israel-Arab divide. More than a decade ago the Israeli conductor Daniel Barenboim and his friend the late Edward Said, the Palestinian writer and professor, held a workshop in Germany for young musicians from the Middle East. The idea was that they would make music on neutral ground — and learn to understand each other.

They were to become the West-Eastern Divan Orchestra. The workshop was held again in Weimar in 2000 and in Chicago in 2001. The orchestra has since found a home in Seville, Spain, where it has been based every summer. The musicians from Israel and the Arab and Muslim world have performed to acclaim at venues such as the BBC Proms — and in Ramallah, on the West Bank.
Two members of the Jerusalem Quartet play regularly with the orchestra.'

Here is the BBC report of the court ruling:

A selection of 15 photographs taken outside the court before and after the ruling is included.


Here is an Indymedia report from a hearing in August 2009:

An Indymedia report of the case from October 2009: