On International Worker's Day, Saturday 1st May 2010, the Four Horsemen of the Apocalypse will take to the streets again at the head of four Mayday Carnival Parades. 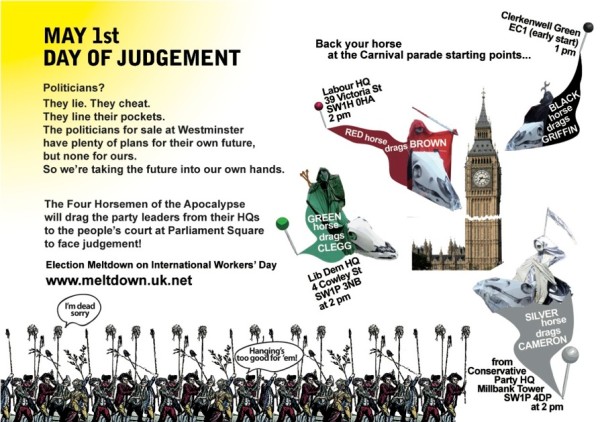 All four Parades will converge on Parliament Square at 2:30pm, and the carcasses of the four party leaders will be hung, drawn and quartered, or guillotined in accordance with the wishes of the assembled multitudes in a Mayday Carnival.

The Carnival will set up a Direct Democracy Village to occupy the Square until the General Election likely to be on Thurs May 6.


A People's Assembly will convene on the green, where people can meet as equals to decide what we really want.

Can we oust the bankers from power?

Can we get rid of the corrupt politicians in their pay?

Can we guarantee everyone a job, a home, a future?

Can we abolish all borders and be patriots for our planet?

Can we all live sustainably and stop climate chaos?

Can we make capitalism history?

DEATH TO THE OLD, CORRUPT ORDER – POWER TO THE PEOPLE'S ASSEMBLY!