Protesters who claim BP's planned exploitation of Canadian Tar Sands is the most destructive project on the planet, with huge pollution, destruction of ancient forests and harm to indigenous communities, closed a BP garage at Shepherds Bush Green for the day by holding a 'Party at the Pumps. London, UK. 10/04/2010 Photographs copyright (C) 2010, Peter Marshall, all rights reserved. 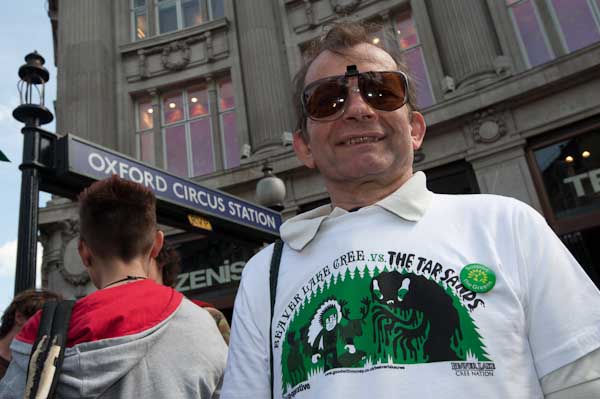 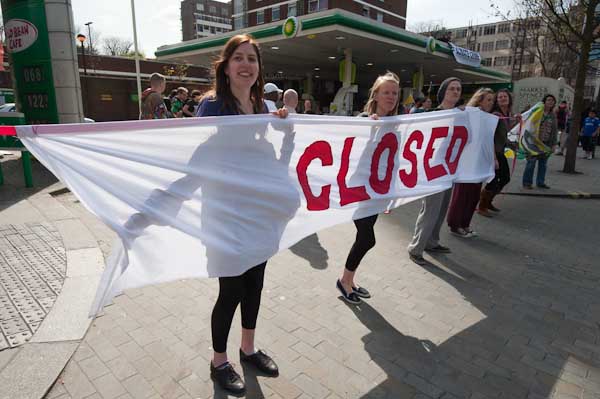 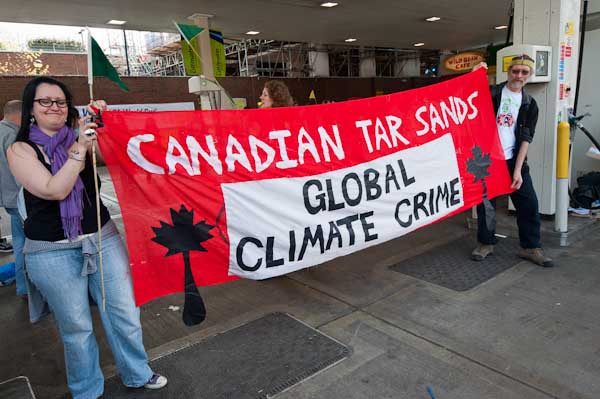 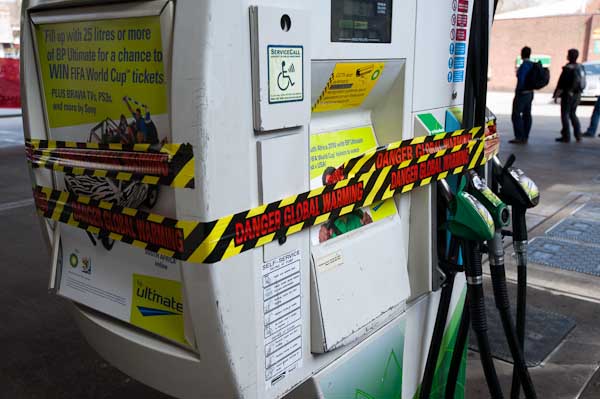 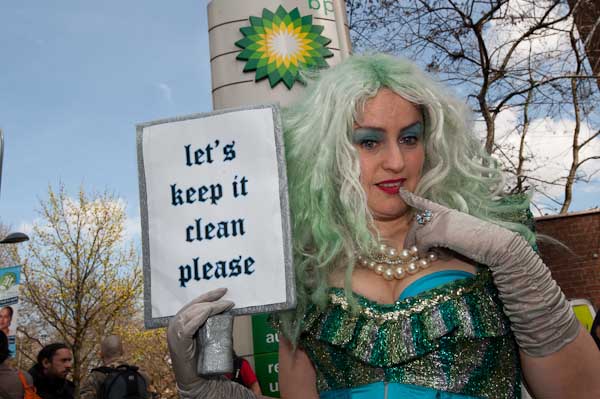 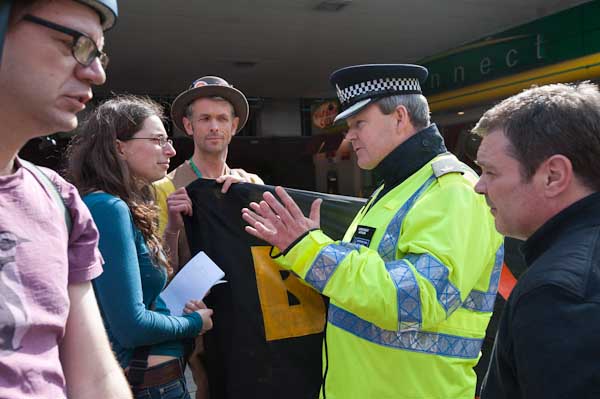 Police try polite approach. How long do you think you'll be staying?

The protest, organised by the UK Tar Sands Network, Rising Tide and the Camp for Climate Action, was a part of a 'BP Fortnight of Shame' aimed at trying to get BP shareholders to reverse the company's decision to take part in what environmentalists say is "the dirtiest and most desperate attempt yet to profit from - and prolong - humanity's crippling addiction to oil."

The extraction of usable crude oil from tar sands takes huge amounts of energy and water, resulting in the overall production of from three to five times the amount of carbon dioxide as conventional oil.

Roughly 4 tonnes of earth need to be dug up to make one barrel of oil, starting by stripping off the ancient forest and peat bogs and then using huge trucks and shovels to dig up to 75 meters of the tar containing sand and clay for extraction. But four-fifths of Alberta's tar sands are too deep to be mined in this way and are brought to the surface by the injection of high pressure steam (Steam Assisted Gravity Drainage), which uses roughly twice the energy and water needed for strip mining.

The process produces large amounts of highly toxic waste water, much of which is already leaking into drinking water. There have been very high rates of cancer reported among the indigenous people living in the area as well as other diseases. Moose meat, a staple of their diet, has been found with heavy metal contamination from water sources at up to 300 times the acceptable level. Chiefs from across the whole area have called for a moratorium on new tar sands projects, and several are fighting developments in the courts.

There seems unlikely ever to be any technology that could make the extraction of oil from tar sands clean, and the prospects of carbon capture and storage (CCS) are far more remote than the rather slim chance that this will ever work effectively for coal. There can be no justification for further tar oil extraction until the technologies for 100% CCS and solutions to the even more intractable environmental issues can be demonstrated to work.

BP, unlike the other oil majors, were not involved in the tar sands until 2007, possibly because they realised the environmental disaster involved, but more likely because they had cheaper sources of oil. But in 2007 they signed a deal with the Canadian Company Husky Energy for a large-scale tar sands project they called the 'Sunrise Project' and since then other BP projects have emerged. 'Sunrise' was put on hold when oil prices crashed in 2008, but along with the other dirty tar sands ventures seems likely to get the go-ahead at the BP shareholders meeting on April 15 unless they can be made to see the problems involved and take a responsible attitude to the environment.

The location of the demonstration was a closely kept secret, and those taking part were told to meet at Oxford Circus with a Travelcard. After half an hour of waiting around, a whistle blast was a signal for everyone to rush down into the station, following those with green and yellow flags, a few of whom knew the destination.

The Central Line was pretty crowded and the seventy or eighty people were spread out over a number of carriages, along with a couple of police who had followed them into the station. At Shepherds Bush the message came to get off, and follow the leaders. They rushed out and along the busy shopping street, across the green to the BP garage on the south side, which had already been occupied by a smaller advance group of demonstrators.

Some of these had made their way onto the roof of the petrol station from the scaffolding on a neighbouring block of flats and were fixing a banner along the front of the roof, while others had blocked the entrance with a large banner saying 'CLOSED'. The staff were locking themselves into the shop area and there were one or two police around, but too many protesters for it to be possible to stop the occupation of the forecourt.

Soon there were more banners being displayed, tapes going up around the pumps with the message 'Danger Global Warning' and 'bp tar sands - back to black?' stickers being applied liberally to pump handles and other surfaces.

The Rhythms of Resistance band had also arrived and was playing to make sure everyone in the area would notice the protest as well as to start the partying. A bicycle trailer sound system arrived, and when the band got tired took over playing music.

After the protest had been going for around an hour, a police officer came across with a man from BP to talk to the protesters. They asked when the protest would end and was told it would end some time later in the day when it was over and that there was no intention to cause permanent damage. The man from BP said he was worried about the safety of those on the roof, but was told they were probably capable of avoiding throwing themselves from it and would be able to make their way down safely in the same way as they had gone up.

The police then escorted the man from BP into the shop to talk to the employees there before leaving the petrol station.

A live band played for some dancing led by a caller which perhaps a third of the roughly hundred demonstrators now present took part in. It was a warm afternoon and most were content to sit on the pavement and talk, eat sandwiches and snacks and drink, while some handed out leaflets to the passers-by and explained why the protest was taking place. Those who wanted to smoke made sure they kept well away from the pump area.

When I left after more than two hours on the site the police were still standing around and watching the protest, filming and taking notes but not otherwise taking any action. There were no arrests.

and in a day or so a larger set on My London Diary: