Dateline: Party at the Pumps, Shepherd's Bush Green BP Petrol Station, London, UK, 13:00-17:00, Sat 10 Apr 10 – Hundreds of people descend upon the BP petrol station on the south side of Shepherd's Bush Common for a four hour long 'Party at the Pumps'. Dancing to live music from the Rhythms of Resistance samba band and the Green Kite Midnight ceilidh band, plus MP3s piped through the Bicycology sound system, we rocked the forecourt, left peacefully and there were no arrests. But why? This was the London direct action component of an International Day of Action on the Canadian Tar Sands – the single most dirty, toxic and dangerous climate crime atrocity on Earth; and the centrepiece of the 'BP Fortnight of Shame', culminating in a vote at the BP shareholder's AGM in London on Thursday 15 April 2010 to keep BP out of the planet-trashing Canadian Tar Sands (protest details below). 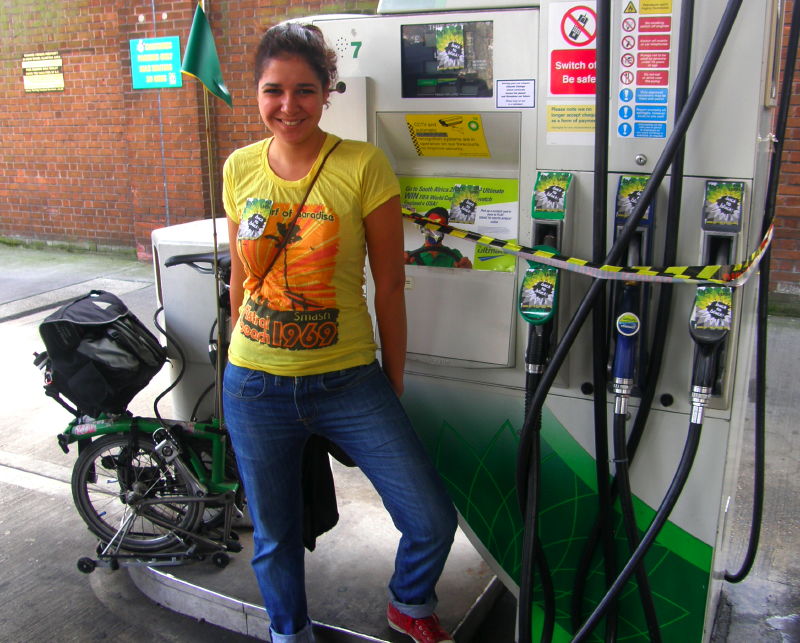 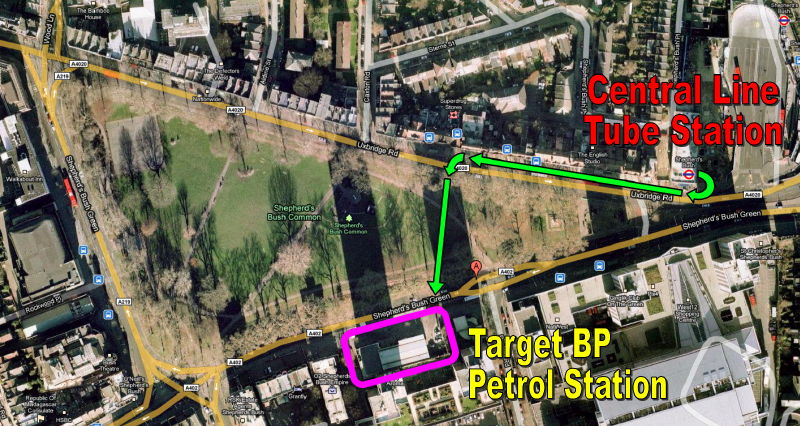 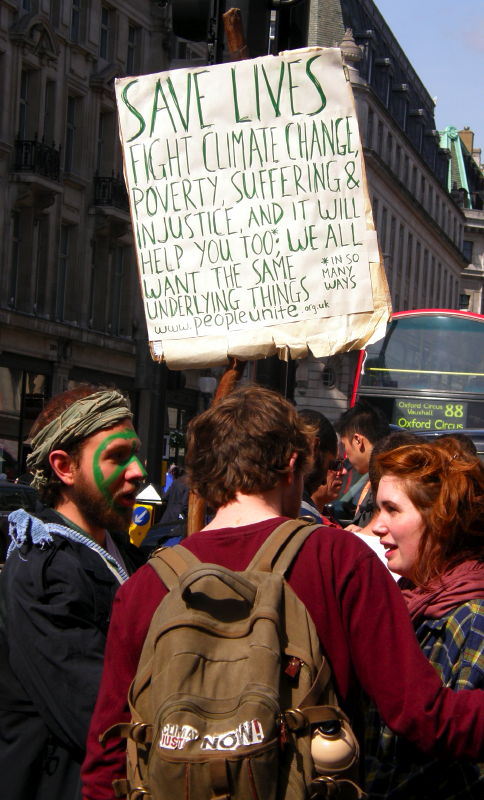 B1. A Sole Placard

B2. Some Will Cycle to Our Target 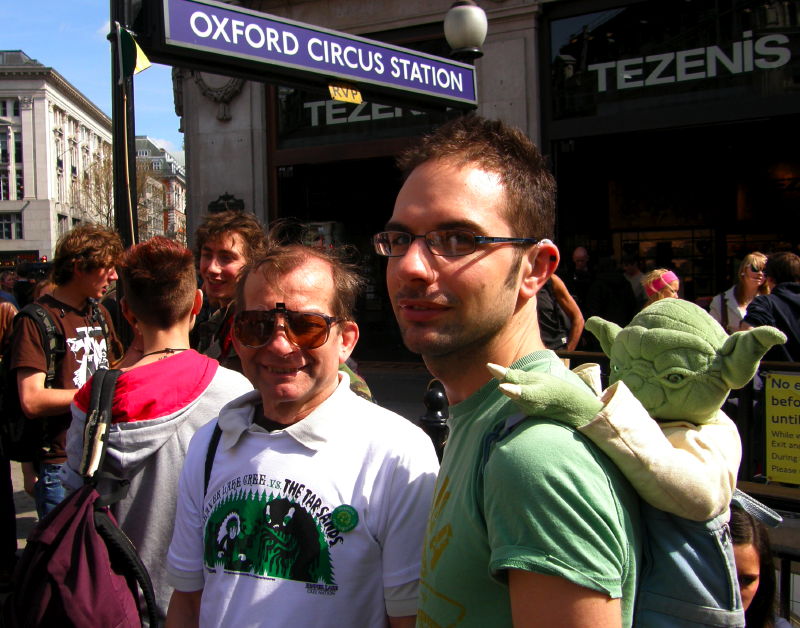 B3. With Beaver Lake Cree Sisters & Brothers, Solidarity We Demonstrate 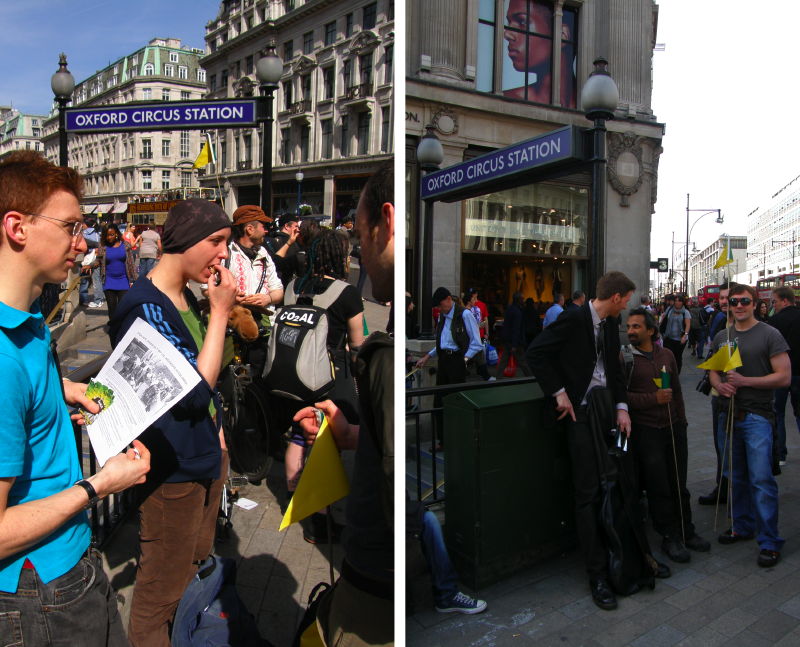 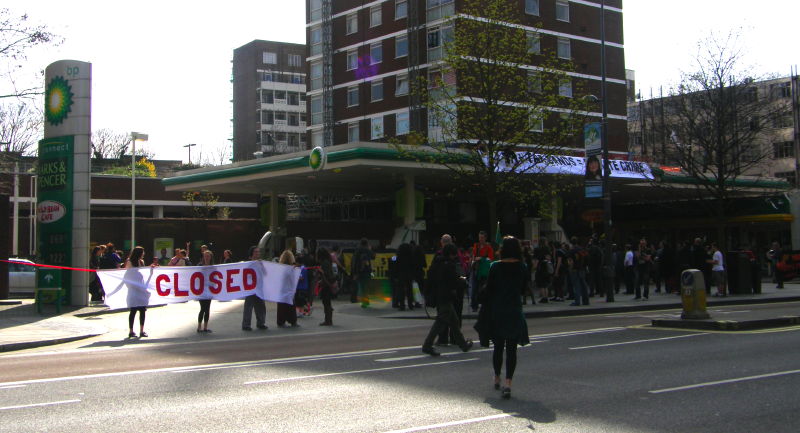 C1. Upon Arrival – NOT Business As Usual 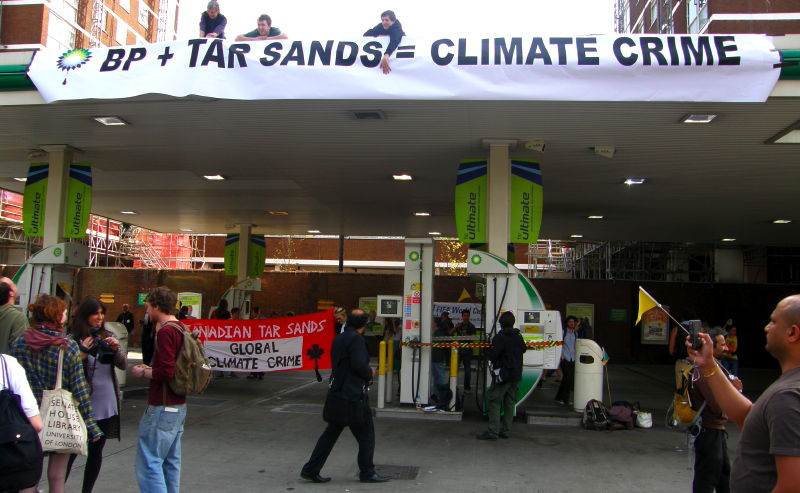 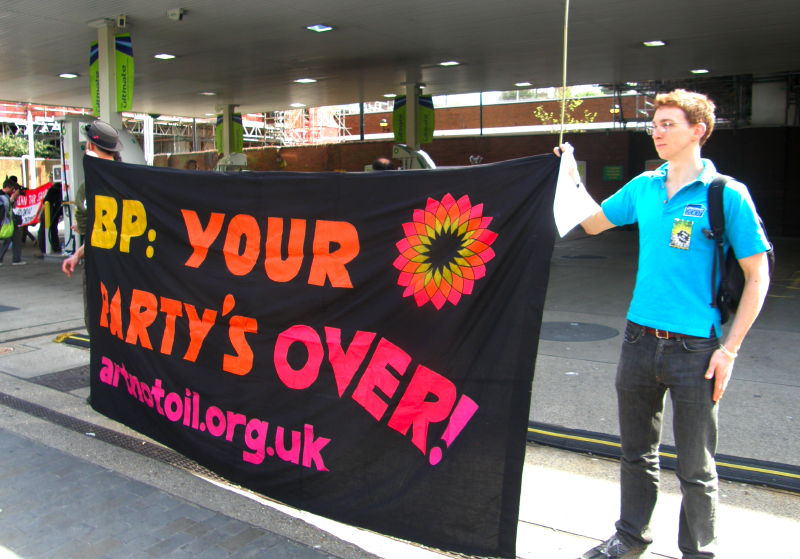 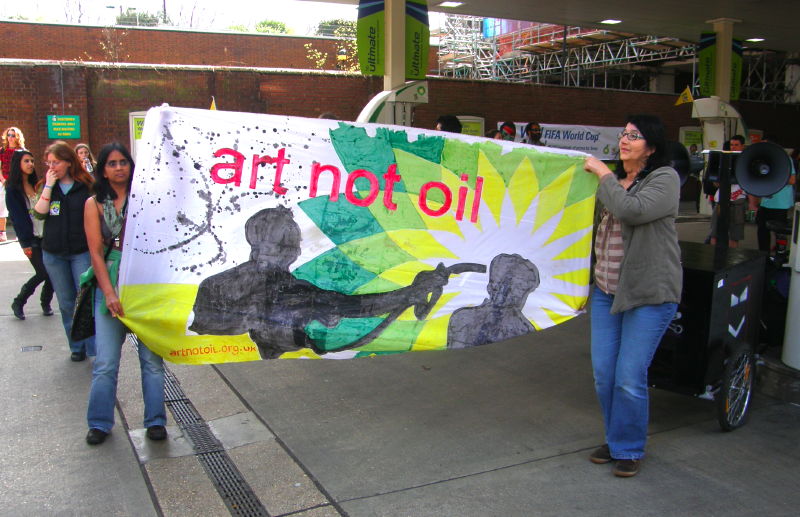 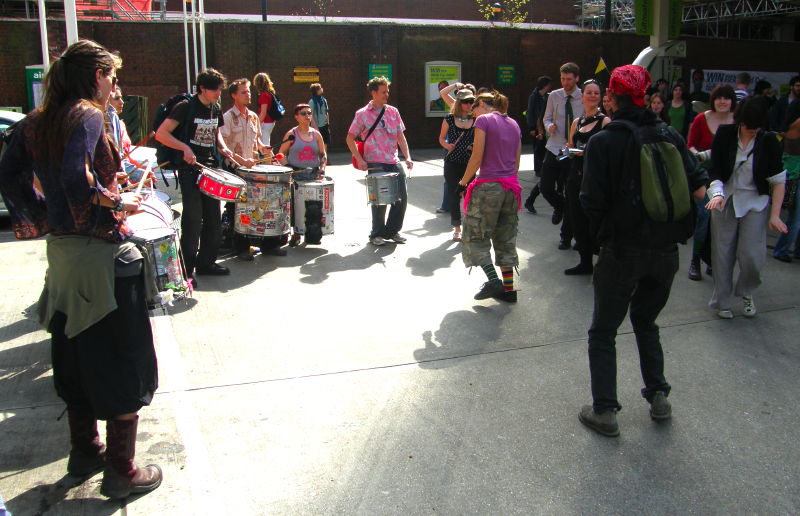 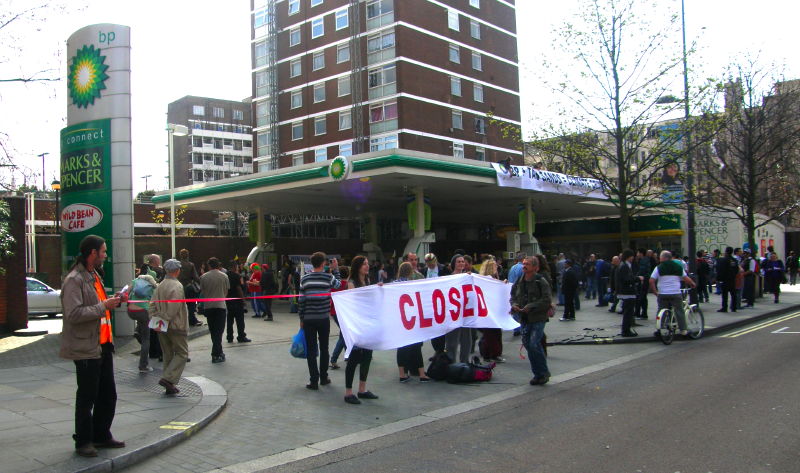 C6. Petrol Station Gets All Partyed-Up 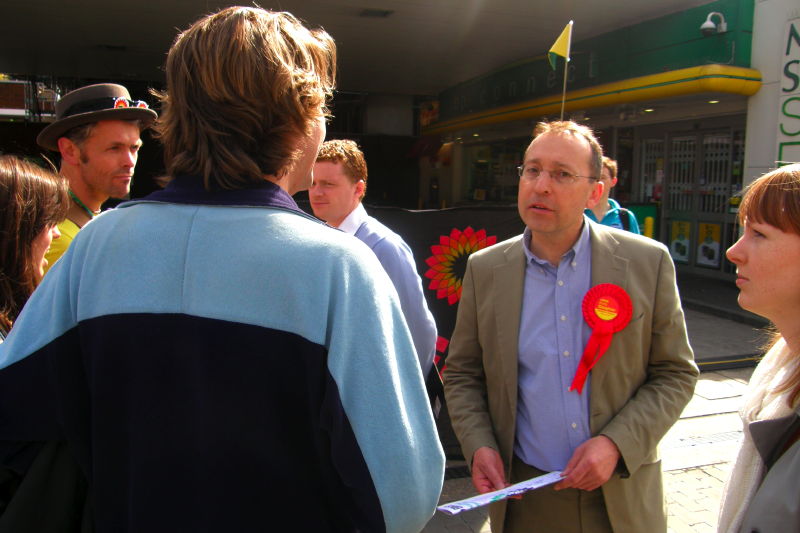 • 'BP hit by nationwide protests over plans to Enter the Tar Sands', by youandifilms
» video, 5:14 –

• 'BP party at the pumps', by AlexMilanTracy, at Demotix
» pix-led report –


KEEPING THE ROZZERS CLUELESS
We began gathering on all four corners of the recently remodelled Oxford Circus crossroads junction at 13:00, and the word was passed around: on the whistle blast we descend into the tube station, and follow the folks with the yellow/green pennants on bamboo poles. When the time came, a few coppers followed along to the westbound Central Line tube platform, but had no more clue than the great majority of party goers as to when to disembark. But by this time, whistles had been distributed, and the cue to get off made known – another whistle blast, echoing along the length of the train, signalled our disembarkation at Shepherd's Bush station.

Through careful spacetime co-ordination with an advance party, the BP petrol station on the south side of Shepherd's Bush Green was easily taken, without any interference from the rozzers. By the time I'd pushed my still-folded Brompton bike there, the party was in full swing:
• the Rhythms of Resistance samba band were rocking the neighbourhood, to the delights of the dancing masses
• the roof over the petrol pumps was occupied, and a large long banner affixed thereto, reading 'BP + TAR SANDS = CLIMATE CRIME'
• six people were holding a huge 'CLOSED' sign across the vehicular entrance
• diverse other banners were being deployed

Well, Emma, there IS dancing in our revolution, and plenty for all to go round. Indeed dancing around and in between the petrol pumps was a highlight of the 'Party at the Pumps', thanks to the fan-blinkin-tastic Green Kite Midnight ceilidh band, with a little help from the two Tims – one of us brought along a 70W, three-microphone, sound system, while the other did an outstanding human-mic-stand job. Scores of party people danced delightfully to the hoe-down instructions of the excellent and well-amplified caller, and joyful exuberance pervaded our party of protest.


"Tar sands projects are dodgy no matter how you slice it – they're environmentally, socially and economically unsustainable. I think the grilling that BP and Shell are getting over their involvement in the tar sands is well-deserved, and I hope investors keep up the pressure with a strong vote in favour of the resolutions at the AGMs this spring."
~ Alistair McGowan, actor and comedian
[source:


TELLING BP STRAIGHT – STAY OUT OF THE CANADIAN TAR SANDS!
Why would a couple of hundred people want to spend a sunny Saturday afternoon at a party on an illegally occupied petrol station? For most, the motivation arose from tackling the anthropogenic catastrophic climate chaos crisis head on: by taking direct action on the streets. This event was the centrepiece of an internationally co-ordinated 'BP Fortnight of Shame', aimed at sending the clearest possible message to the BP shareholders AGM on Thu 15 Apr 10: "Don't you DARE get into the Canadian Tar Sands, or we'll make you live to regret it!"

The 'BP Fortnight of Shame' was organised in international solidarity with our indigenous First Nations sisters and brothers, who are being poisoned and killed (as is their ecosystem) by the single greatest industrial climate crime on Earth: the Canadian Tar Sands atrocity. The UK Tar Sands Network, Camp for Climate Action, Rising Tide UK, plus a host of other groups and hundreds of individuals co-created a wide range of direct actions, in solidarity with the Tar Sands campaign of the Indigenous Environmental Network of North America.

"We really wanted to get the message out there and we handed out thousands of leaflets. I think people were supportive and, surprisingly, we didn't get one driver who was annoyed about the station being closed. A lot tooted their horns in support.
It is vital something is done about this. We will never meet emissions targets if this project goes ahead – CO2 will go up 25% in Canada alone, there will be an increase in cancer and widespread water pollution there.
To give an idea of its scale, it's the only petro-chemical project you can see from space."
~ Tony Cottee, Rising Tide activist
[source: 'Climate change demo converges on Shepherd's Bush', in the Fulham Chronicle – '

The British transnational oil corporation BP – originally 'British Petroleum', then briefly 'Beyond Petroleum', now aiming to go 'Back to Pollution', or alternatively 'B*stard Planet-f*ckers', depending on your personal righteous anger – is intending to cut itself a part of the Tars Sands action. The UK FairPensions campaign for ethical investment has won widespread support for its 'TAR SANDS – COUNTING THE COST' initiative against British transnational oil corporations Shell and BP, including tabling anti-Tar-Sands motions at their spring AGMs. So if you want to help drive a nail into the coffin of BP's Tar Sands ambitions, you are welcome to join us at the culminating protest of the 'BP Fortnight of Shame': BP + TAR SANDS = CLIMATE CRIME Protest, Thursday 15 April 2010, 10:00-13:30, Excel Conference Centre.

We know we're not alone – the Columbia Solidarity Campaign will be outside demanding that "BP MUST RECOGNISE ITS RESPONSIBILITY TO CASANARE WORKERS, COMMUNITIES AND THE ENVIRONMENT". And there will be indigenous First Nations folks INSIDE the BP AGM arguing against BP joining in the Tar Sands climate crime atrocity. Some people going in to the BP AGM will be already mandated to vote against BP's Tar Sands commitment and deserve our vocal support; and others need to know that there's an active campaign AGAINST BP soiling themselves with Tar Sands shit. So let's show up mob-handed, and acquit ourselves with the honour of knowing we did all we could, in solidarity with our First Nations sisters and brothers, to halt BP's slide Back to Black and stymie their climate criminal Tar Sands plans.

PS: Sorry about the tardiness; I watched 'Control' (

http://www.imdb.com/title/tt0421082/ ) on Sunday and it is such a devastating tragedy, it knocked me for six for a while.