Call for a European Week of Action Against the Deportation Machine

Stop Deportation, along with other groups in Europe, are proposing a European Week of Action Against the Deportation Machine, with a focus on joint European mass deportation flights and Frontex. The proposed date is the first week of June 2010, 1st-6th.

The idea is that groups and campaigns throughout Europe organise their own direct actions, demos and marches against forcible deportations from European countries, which are increasingly carried out through joint coordinated 'operations' involving private contractors and shadowy agencies like Frontex and the IOM. Protests will inevitably take a variety of shapes but a series of coordinated, decentralised actions and protests would make the message clearer and louder. A week, rather than a day, of action would allow groups more flexibility to do what they want to do.

By trying to widen the scope and diversity of the groups involved, we also want to draw attention to the fact that anti-deportation is not a 'single issue campaign'. People choose or are forced to migrate for a variety or reasons, from wars and armed conflicts fuelled by the arms trade and western interests, through poverty, exploitation, discrimination, gender oppression, domestic and state violence, to climate change. 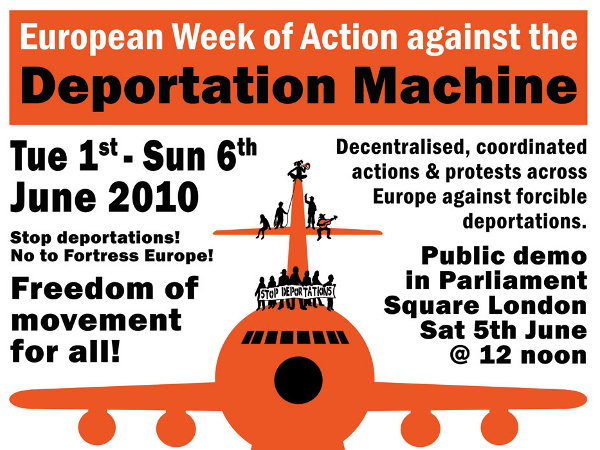 week of action against the deportation machine

Deportation has become an integral part of the European immigration regime. Hundreds of refugees and migrants are forcibly deported everyday for doing what humans have done for thousands of years: moving in search of a better life, escaping poverty, abuse, discrimination, persecution, war and so on. The right of everyone to travel and live where they want is denied for those with the 'wrong' skin colour, passport or bank account. They are treated like 'criminals' and incarcerated in special prisons disguised under various euphemisms (removal centres, guest houses and so on). Racist and sexual abuse and physical violence at the hands of immigration officers and private security guards are institutionalised by legitimising the use of force in deportation operations. Even the more vulnerable among migrants facing detention and deportation, such as children and torture survivors, are treated with humiliation instead of being offered help and support.

Behind deportations lies a mixture of racism, nationalism and imperialism in a global capitalist context: whilst capital and the nationals of the EU and other 'first world' countries are free to travel wherever they want, those on the wrong side of artificially erected borders, whose countries are often torn apart by these very privileged Europeans and their capitalist and imperial conquests, are illegalised, criminalised and prevented from exercising their fundamental rights. They simply cease to be people; they become 'illegal immigrants', 'over-stayers' and 'failed asylum seekers' who can be dispensed with when their exploited labour is no longer needed or when they stand up for their rights. As a consequence, common struggles and communities are divided and a culture of suspicion and surveillance prevails.

When it comes to deportation orders, the causes of migration are also conveniently forgotten about. Western-manufactured weapons and armed conflicts, wars of aggression in pursuit of oil and other natural resources, repressive regimes backed by our democracy-loving governments, climate change and land grabs... they can all be traced back here, to our capitalist economies, consumerist lifestyles and imperial interests. Anti-deportation is not a 'single issue campaign' and people choose or are forced to migrate for a variety or reasons.

To operate a deportation flight, European governments contract a range of private and semi-private bodies to do the dirty work for them. Airlines are a key link in the deportation machine. Not only are they one of the major contributors to the progressive killing of the planet, many airline companies are also happy, in their pursuit of profit, to fly people to their possible death, both individually and en masse. Other profiteers include companies providing transport and escort services during forcible deportations and multinational security companies, such as Serco and G4S, that manage immigration prisons and carry out deportations on behalf of immigration authorities.

Then there are those shadowy, unaccountable, inter-governmental agencies, such as the EU external border agency (Frontex) and the International Organisation for Migration (IOM), whose role has become more and more prominent in recent years as European governments seek to carry out deportations through joint coordinated 'operations'. This not only saves them money but also, by putting deportations in the hands of a regional or international body, pushes accountability to another level away from national governments and immigration authorities. Indeed, Frontex has recently assumed extra powers to charter mass deportation flights on behalf of European governments, buy equipment and explore satellite technology to monitor the 'EU borders'. After all, a racist, imperial super-state like Fortress Europe needs a mercenary army like Frontex to protect its artificial borders.

Deportees, including families and children, are often handcuffed and accompanied by security guards as if they were 'dangerous criminals' (the label 'criminal', as used by those in power, is problematic anyway). There have been numerous reports of physical assaults and racial and sexual abuse suffered by deportees at the hands of immigration officers and private 'escorts' during individual and mass deportations. Proposals to have 'human rights monitors' on deportation flights, as recently recommended by a senior EU commissioner, may prevent some of these practices but will also legitimise the brutality of deportation itself.

We realise that resistance against deportation is continuous and not confined to days or weeks of action: people trying to cross the border in the most dangerous conditions everyday; hunger strikes and riots in immigration prisons; deportees and sympathetic passengers refusing to sit down quietly on board inconspicuous planes; communities coming together to defend their members; regular protests and actions against various parts of the deportation machine... Yet, more needs to be done as thousands of people continue to be forcibly deported everyday.

We are calling upon all concerned individuals and groups throughout Europe to join us in a decentralised, coordinated week of action against the deportation machine in the first week of June 2010. We are calling upon migrants and refugees and their supporters inside and outside Europe to organise their own actions and protests during this week in a united cry:
STOP DEPORTATIONS!
NO TO FORTRESS EUROPE!
FREEDOM OF MOVEMENT FOR ALL!