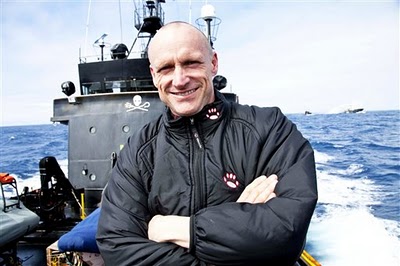 Bethune was captain of the Ady Gil at the time. He later undertook a one-man mission to board the offending whaler - Shonan Maru No. 2 – to confront and make a citizen's arrest of its captain and to hand him a bill for £2 million. The captain of the Whaler is not even being investigated by Japanese authorities after ramming and sinking another vessel at sea, putting six lives in danger.

After Bethune boarded the boat, it set a course for Japan to turn him in to the authorities. He is now on charges of assault, illegal possession of a knife, destruction of property, obstruction of business and trespassing. The charges could land him a prison sentence of up to fifteen years plus fines. Sea Shepherd are calling him a political prisoner.

Figures just back on this year's whaling season show how successful Operation Matilda was. Over half of the 1035 whales which the Japanese government had (illegally) permitted to be killed were saved. Of the 935 protected minke whales earmarked for death, only 506 were killed, the whalers failed to bag any of the 50 allotted endangered humpback whales and only one of the 50 endangered fin whales.

The Japanese whalers will have lost a lot of money as they need to kill 700 whales to break even – and that's not including the additional expenses of the security, surveillance flights, extra fuel used while being chased, public relations and paying workers on ships as they did nothing. Following this year's low catch, the Japanese Fisheries Agency Takashi Mori laughably said, "The lack of samples could affect the accuracy of our research."

Dan Wadham, long term AR prisoner was punished this week for daring to raise money for Sea Shepherd. Dan is serving five years for activities relating to SHAC (see SchNEWS 663) and is currently at HMP Camp Hill on the Isle of Wight. Having access to a small prison running track, he hit on the idea of doing a sponsored marathon. He completed the well publicised run on 15th April - without any interference from the prison authorities. However this week he found his prisoner status had been dropped from 'enhanced' meaning a significant loss of privileges. The prison's security advisor had apparently retrospectively decided that this charitable act counted as a 'political action'.

Also in SchNEWS 718: Tar-Mageddon | Crap Arrest Of The Week | Camp Hill Races | Counter Punch | Lunartics And Asylum | Experimentalists | Mains Still At It | Milking It | And Finally