Joe Glenton is an ordinary, decent man who committed his life to the defense of his country only to find himself participating in an aggressive war against a poor and far-off country that has neither the resources nor the will to be any threat to his own country. He is now being criminalized for his unwillingness to participate in an illegal, immoral war and for speaking out against the actions of criminals with power. 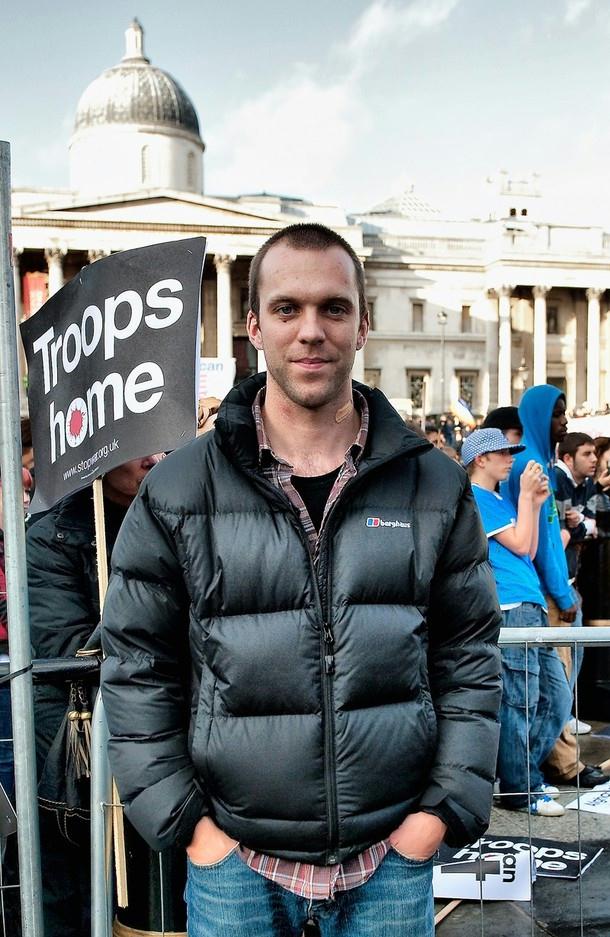 It follows logically that when criminals and psychopaths obtain positions of power and reach the upper echelons of government and its institutions the ordinary people, decent people who abide the law and accepted social behaviour will inevitably be criminalized when they confront the immoral actions of power. This is the situation we have today.

Joe Glenton is an ordinary, decent man who committed his life to the defense of his country only to find himself participating in an aggressive war against a poor and far-off country that has neither the resources nor the will to be any threat to his own country. He is now being criminalized for his unwillingness to participate in an illegal, immoral war and for speaking out against the actions of criminals with power.

The Payday Men’s Network and Stop The War Coalition have expressed objection to the imprisonment and ill-treatment of Joe Glenton as follows, demanding his immediate release and I most emphatically concur with these objections.

"Joe Glenton, 27, joined the Army in 2004 and was sent to Kandahar, Afghanistan, in 2006. During his tour, he was shocked to find that the Afghan people, whom they had been told they had come to help, were fighting against British troops. Ashamed, disillusioned and traumatised by his military experience, he went absent without leave (AWOL) in 2007 and handed himself in two years later.

Joe Glenton was jailed in November 2009 after he spoke to an anti-war rally in London. Diagnosed with post traumatic stress disorder (PTSD), he was released five weeks later on condition that he no longer speaks publicly against the war. And this is Joe Glenton’s worst “crime”.

On 5 March 2010, he was sentenced to nine months in jail, a harsh sentence compared to what other (less public) soldiers convicted of going AWOL have received.

Prison conditions have also been harsh. The Army stopped Mr Glenton’s pay -- he gets only 88p a day pocket money. He cannot receive money, food, clothes or cigarettes and is only allowed ten minutes a week for telephone calls and (apart from his lawyer) two hours a week for visits.

He is suffering additional mistreatment: after complaints that he had not received books sent by supporters, the prison authorities accused Mr Glenton of insulting an officer, a charge he denies. They are trying to force Mr Glenton to sleep under a dirty blanket - a punishment that often leads prisoners to get body lice, and to wear boots despite the fact he has a broken toe. He has refused the ‘blanket’ punishment: he is now threatened with solitary confinement. Crucially, he is getting no help whatsoever for his PTSD. These practices are totally unacceptable and we believe illegal. We urge you to stop them immediately.

We believe that Mr Glenton is being punished because he and his family have never stopped speaking out against the war in Afghanistan, a feeling shared by the majority of British public outside and, increasingly, inside the barracks.

Joe Glenton has already spent far too much time in jail. We request that he is released immediately so that he can go back to his family and community and access the health care his condition requires."


It is my personal view that the people inflicting these ill-treatments of Joe Glenton are expressing symptoms of mental illness and I present for you, in support of this view, a dictionary definition of the English word Psychopath: One who can inflict pain, suffering, injury, even death without empathy, compassion or remorse.

Being in league with people who have initiated TWO illegal wars that have resulted in eight years of death and suffering among the civilian populations of two countries, they are in like company. From the politicians and government officials responsible for these actions, the military authorities and officers who carried out their orders and who should know that they are illegal, the law enforcement authorities who fail to apply the law to them and the members of the judiciary who falsely declare matters of war and decisions to go to war as “not justiciable”, all have been party to repeated and ongoing behaviour that clearly fits the definition of psychopathic behaviour.

People who have eyes to see, minds able to reason and a conscience capable of moral reasoning know that these things are true and this truth is becoming increasingly uncontainable. The imprisonment and ill-treatment of Joe Glenton is just one more indication of the inversion of the social order and the burgeoning awareness and resistance to it. I implore you to act now.

I urge you to free Joe Glenton IMMEDIATELY!