The Peace Prize winner in the White House continues to beat the drums of war with Iran, in perfect synch with the corporate media orchestra. “The New York Times was made privy to what has been called a ‘parlor game,’ of ‘Imagining an Israeli Strike on Iran’” – apparently in the spirit of the old motivational slogan, “If you can conceive it, you can achieve it.” 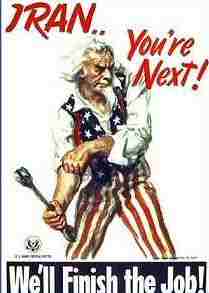 The Peace Prize winner in the White House continues to beat the drums of war with Iran, in perfect synch with the corporate media orchestra. “The New York Times was made privy to what has been called a ‘parlor game,’ of ‘Imagining an Israeli Strike on Iran’” – apparently in the spirit of the old motivational slogan, “If you can conceive it, you can achieve it.”


“It is Obama who will instigate a conflict that the much-hated Bush would not.”

Threats both subtle and not so subtle were constantly made against Iran during the presidency of George W. Bush. Beginning with the infamous “Axis of Evil” speech, a campaign of threats began and a bevy of lies were told claiming that
Iran threatened Americans’ very lives.

Iran’s nuclear power capability is used to keep us frightened beyond all reason. That nation’s domestic turmoil wrought by last year’s disputed presidential election has also been used as proof that Iran is a terrorist state, or a “state sponsor of terror” or whatever new terms can be invented to make Americans believe that war is a necessity.

The Obama administration has once again taken up where the Bush administration left off, but in a far more clever way. In September 2009, with British Prime Minister Gordon Brown and French President Nicolas Sarkozy by his side, Obama announced that the Iranians had a nuclear enrichment facility in the city of Qum. Brown and Sarkozy played their roles perfectly, exclaiming in equally hysterical tones that Iran is up to something nefarious and must be stopped. What the press didn’t reveal was that the Iranians themselves, not the United States government, announced the facility’s existence just a few days earlier.

“The ties between corporate media and the highest levels of government have never been clearer.”

The corporate media have joined in on the side of our government, guaranteeing access for their reporters and Pulitzer prizes in their future. The New York Times was made privy to what has been called a “parlor game,” of “Imagining an Israeli Strike on Iran.” The ties between corporate media and the highest levels of government have never been clearer. This game, this plan for the death of thousands of human beings, is clearly on the drawing board for the Obama administration and the New York Times and its ilk will be among the biggest cheer leaders.

The drum beat of lies continue on a daily basis. Shahram Amiri is an Iranian nuclear scientist who disappeared while on pilgrimage to Mecca in June 2009. Iran accused the United States of abducting him, a claim which was vehemently denied for months but which was very recently confirmed as being true. Now the CIA admits that Amiri is in United States custody and claim that he defected willingly. The degree of willingness which resulted in his presence in the United States should be accepted with the same grain of salt as any other claims about his country. So far it appears that Iran tells the truth and our own government tells lies.

The latest administration claim is that the members of the United Nations Security Council are united in applying more sanctions against Iran. China has so far been reluctant to bend to America’s will. Now the Obama administration claims to have Chinese support in applying even more sanctions against Iran. Like the claims of non-involvement in the “defection” of Amiri, these claims may yet prove to be specious. Even if true, the degree of arm-twisting from Obama must be considerable if the Chinese reverse course.

“China has so far been reluctant to bend to America’s will.”

Nearly ten years ago the Bush administration went through the same awful game, with Iraq as its target. Now the Peace Prize administration is engaging in the same tactics. Iran is blamed for everything except bad weather. Admiral Mullen, Chairman of the Joint Chiefs of Staff, blames Iran for “providing some assistance to insurgents in Afghanistan.” Iran has nukes, helps insurgents and wants to steal your first-born child, too.

Barack Obama appears to be more intent on making good on threats against Iran than George W. Bush ever was. Bush did not make the same efforts of applying pressure on European governments and on the Security Council to back additional sanctions, the first precursor to war. He didn’t invite New York Times reporters to take part in war game simulations. No, it is Obama who will instigate a conflict that the much-hated Bush would not.

When it happens, when Barack Obama appears on television speaking in the most serious tones about why Iranians have to die, what will we say? What will black Americans, formerly in the vanguard of every antiwar movement, say about the slaughter? What will all progressives say about an awful crime against humanity?

We can only hope that the United States and Israel have under estimated the Iranians ability to defend themselves. If they or anyone else on this earth, is expecting an outcry from the American people or its media, they will be sorely disappointed.