Week of Action Against University Vivisection

Over the past seven days, animal rights activists have hit the streets and campuses nationwide, calling for an end to animal experimentation in universities as part of the Week of Action Against University Vivisection organised by SAEAB. 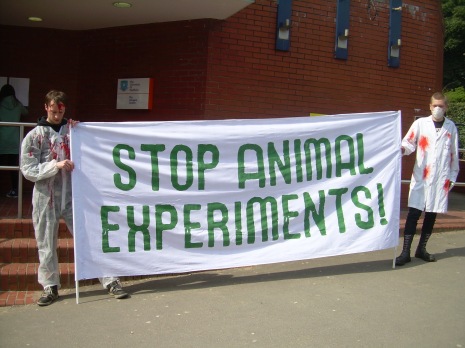 With one third of the 72 universities conducting vivisection, including the three largest (UCL, Cambridge, Oxford), covered with demo's and actions, this has been the biggest week of action the UK animal rights movement has seen in a number of years and is most certainly a success. Other companies with links to academic animal experimentation were also covered; animal breeders, investors and academic consortiums being subject to noisy demonstrations. The UK's largest biotechnology conference was also covered - BioTrinity 2010, attended by hundreds of companies from breeders to animal couriers, cage manufacturers, pharmaceutical companies and universities.

The actions nationally were most certainly determined and focused. At Sheffield, activists scaled a building gaining much attention, Bradford saw security being breached on two seperate occasions with banner drops from balconies and buildings across campus being swamped with leaflets and Cambridge invaded. Others received demo's outside their labs and student unions, exposing the horrific suffering occuring inside their laboratories. Lives have also been saved, with one university offering to hand over animals to campaigners for re-homing, instead of them being gassed to death at the end of experiments. Lufthansa Airlines have also vowed to never again fly animals destined for laboratories, following involvement with Marshall Farms, Harlan and Charles River.

A week today, thousands are expected to march through Central London as part of World Day for Animals in Laboratories and the university campaigns are set to play a large part in this.

With such a success, the point to be made is that no animal experimentation is deemed acceptable and with over 35%* being conducted inside university labs, they are set to become a major focus for the growing animal rights movement. New campaigns are springing up nationwide with Bradford, Sheffield, Oxford, Cambridge, Trinity College Dublin and University College Dublin all being the focus of intense and sustained protest. More are expected to begin over coming months.

It is clear that these campaigns are winnable and win we shall do! Another week of action is going to be announced over the coming weeks.


On Saturday 17th April, activists in Belgium marched on Katholieke Universiteit (Catholic University), Leuven, to oppose their use of primates in psychology experiments.

It begun with speakers from around Europe, including campaign representatives from Anti-Dierproven Coalitie (Anti-Animal Experiments Coalition), Dr Andre Menasche and an undercover investigator who infiltrated Covance Laboratories GmbH in Germany and filmed abuses.

A procession was then held through Leuven town centre, through the busy shopping area.