May 15th 2010: Mass Action for Freedom of Movement

There's now just under a month to go before the Paris Day of Action for Freedom of Movement!
...Have a read of this mini-update & book your travel now... 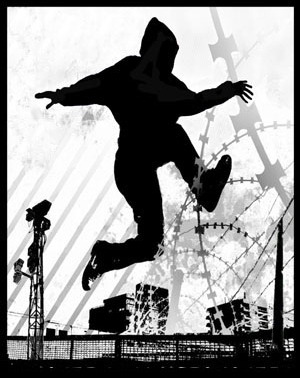 The mobilisation on 15th has grown in part out the ongoing solidarity work of some No Borders activists in Calais. Recognising that there has been no adequate political response to the destruction of the 'jungles', & the ongoing repression there, we realised that we need not only to be responding to the immediate violence, but building a wider network of resistance & making it known that European citizens will not accept the continued persecution of those seeking a better life here.
Migration controls are a global scourge; our resistance can only be transnational.

We've now set up an English language blog, where we're posting info on travel, the legal situation and other practical info:

We will soon announce the breakdown of the day's events, including the main target for action, but feel free to be forming affinity groups & get busy plotting in the meantime...

Reminder of the (translated) callout:

- DAY OF ACTION FOR FREEDOM OF MOVEMENT -

These days, it's not just migrants and sans-papiers who are being stopped and questioned by the authorities, but precarious workers, and stigmatised youth alike; all are being forced to undergo checks on identity and travel documents on the basis of their physical appearance.

Governments seek to legitimise the increasing control and surveillance of the social sphere each day via an expanding toolbox of security legislation.
It is by this mechanism that the denunciation of men, women and children without legal immigration status is encouraged: in the civil service, in the banks, and even in the workplace. Female sans-papiers are further at risk: the reality is that a complaint about acts of violence or rape promptly translates to detention and deportation.
The unemployed and precarious are monitored, criminalised and penalised; communities are divided, people are arrested in schools, those who commit the French so-called 'Crime of Solidarity' are punished, and communities who resist are ultimately vilified.

Following a journey lasting many months, the migrants in Calais seeking entry to the UK are harassed, chased, or deported in a relentless routine. The destruction of the 'Jungle' in Calais, and the systematic closure of all avenues of solidarity by an inhumane police force, has forced the migrants onto the streets, exposing them to yet more persecution.
In the European policy of 'migration management', borders mean watchtowers and barbed wire, and migrants are reduced to mere quotas. To realise their objectives, the European Agency, Frontex - armed and in possession of considerable powers - executes a merciless hunt of migrants in maritime, aerial and terrestrial areas. This only forces people to seek alternative and inevitably more fatal access routes (1,508 deaths at the EU border were recorded in 2008 alone).

Freedom of movement is prohibited and violently repressed for exiles fleeing war, corruption and misery: all accesses to Europe are denied. The right to housing, to work, to a decent existence for those who want to rebuild their lives or rejoin family in Europe, are made a mockery of by oppressive European legislation:

- The Dublin II Regulation allows for the systematic removal of an asylum-seeker to the first country of entry, where their fingerprints were recorded (known as the 'EURODAC' database). This is why Greece, a principal entry point of Europe, in contravention of the European Convention of Human Rights, takes in just 0.03% of asylum seekers.
- The European Return Directive 'harmonises' the duration of immigration detention across Europe, expressly permitting detention for to up to 18 months (with the exception of the UK which opted out and allows for near indefinite detention).
- Meanwhile, the new Stockholm Programme, negotiated by the 27 Ministers of the Interior, will harden existing measures. Under the pretext of the War on Terror, EU nations are choreographing our descent into greater repression and social control.

When the fight against immigration becomes a business, deportation, detention, and the rest of the security architecture becomes the source of (major) profit. Men and women build the detention centres that imprison them, clean the stations and trains in which they are monitored and arrested. They are reduced to a mere workforce, one which can be picked up and discarded without mercy....

BECAUSE FREEDOM OF MOVEMENT IS THREATENED BY THE VERY EXISTENCE OF BORDERS.

NO BORDERS REJECTS AND INTENDS TO FIGHT THE PRISON-LIKE, PROFIT-DRIVEN EUROPE WHICH TRAMPLES ON OUR FREEDOM TO MIGRATE AND TO SETTLE.

FREEDOM OF MOVEMENT AND SETTLEMENT FOR ALL!!!

ON SATURDAY 15TH MAY 2010, WE CALL ON EVERYONE TO PARTICIPATE IN A DAY OF MASS ACTION AGAINST POLITICAL, ECONOMIC, INSTITUTIONAL AND IDEOLOGICAL ACTORS WHO CONCEAL THEIR PROFITS BEHIND A SECURITISED AND REPRESSIVE EUROPE.

NO BORDERS! NO NATIONS!

ALL INFORMATION & UPDATES ON: