An increasing number of grassroots campaigns and groups around the country have been set up to support unemployed workers and benefit claimants, fight privatisation and resist corporate profiteering from the welfare system. Below is an incomplete overview of some of these groups and what they do. 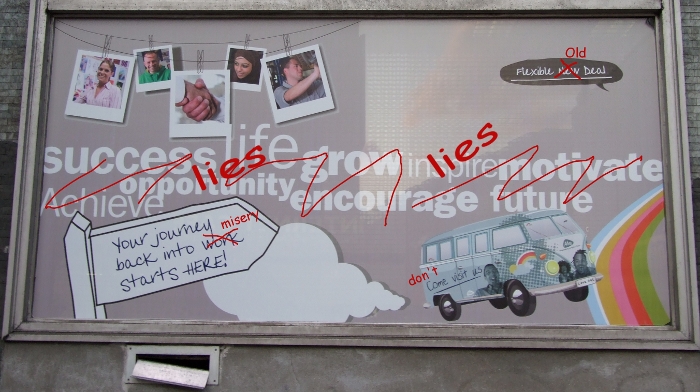 The London Coalition against Poverty (LCAP) was formed in 2007, inspired by Ontario Coalition against Poverty (OCAP), primarily to act as a base for collective action around housing. LCAP has also been doing work around jobcentres since 2008, when some of the people involved with LCAP were asked, wrongly, to give confidential medical information to the jobcentre; when they refused to hand it over, their benefits were cut. Another claimant had their benefits cut because the wrong postcode was written on their claim form. In response, 25 people occupied the jobcentre in Dalston with a list of demands. The claimants’ benefits were soon reinstated and compensation was offered. People also began leafletting jobcentres in Hackney, London, encouraging collective action.

Since then, Hackney Unemployed Workers, a separate group working closely with LCAP, has been formed to ‘keep an eye’ on the jobcentre in Hackney. New coalitions against poverty have also been formed in Tower Hamlets and South-East London.

Edinburgh Claimants was formed in 1992, when the local council cut off funding to Edinburgh Unemployed Worker’s Centre and claimants occupied the building in response. In 1996-7, there were occupations of jobcentres in an attempt to resist the introduction of Job Seeker’s Allowance (JSA), which imposed stricter conditions for people claiming unemployment benefit. There have been meetings of Edinburgh Claimants Union at the Autonomous Centre of Edinburgh since 1997.

In 2008, the Edinburgh Coalition Against Poverty was formed, inspired by LCAP. One of the first ECAP initiatives was to organise a phone tree to enable swift collective action against jobcentres people’s benefits were cut, bailiff companies engaged in repossessions, bad landlords or to support people who were being harassed by the sheriff’s office. One action has been to go en masse to local councillors’ surgeries to demand that they deal with their constituents’ problems, for example being harassed over old poll tax debt. A later action targetted the Edinburgh offices of Action 4 Employment (A4e), which contracted by Jobcentre Plus to provide unemployment services ECAP’s work is regularly spotlighted in a new local free sheet, the Edinburgh Muckraker.

This new group, based in Cambridge, recently organised a demonstration outside A4e offices in Cambridge. The aim of the group is to “represent and defend the rights of those who are unemployed [and] fight the Welfare Reform Act.” For more information on Cambridge Unemployed Workers Union, see The Cambridge Action Network.

Resistance to privatisation of welfare and support for claimants in Brighton has been provided for years by the Brighton and Hove Unemployed Workers Centre (BHUWC). Regular welfare advice sessions are run at the BHUWC, the Brighton Unemployed Centre - Families Project and the Cowley Club. Between 1995 and1997, there was a vibrant campaign in Brighton against the introduction of JSA; alliances were formed with Jobcentre Plus staff and jobcentres were occupied. People who had been active in the JSA campaign then became involved in various campaigns against welfare privatisation and, eventually, formed a new group called Abolish Working Links (AWOL), which produced a local newsletter about Working Links, a private company paid by the government to get claimants off benefits. The newsletter, bearing the slogan “Working Links, We think it stinks!”, was handed out at various Brighton jobcentres.

The last few years have seen a lull in campaigning on these issues but, in 2009, another group was set up, Brighton Benefits Campaign, to resist against the Welfare Reform Act. The group, still in its infancy, plans to target companies like Working Links and A4e. Other targets include Atos Healthcare, whose computer system, Logic Integrated Medical Assessment (LiMA) system, is used to assess Employment Support Allowance (ESA) claimants. The company further claims that its software may replace doctors assessments. One claimant, who is missing an arm, was given a LiMA computerised assessment which read “mild amputation.” Another read “can take adequate care of his goldfish...” Profiteers also include charities like the British Legion, which works with the DWP to ‘support’ those on sickness benefits to ‘return to work’. Finally, Maximus, the company administering the DWP’s ‘Flexible New Deal’ in Brighton, will be high up on the list of targets.

No to Welfare Abolition

A national coalition of groups, No to Welfare Abolition, is being launched as a base for resistance to the new attack on claimants posed by the Welfare Reform Act. A national gathering was held in 2009 and another is planned this April. For more information, you can join the coalition’s mailing list.

Tuesday 18th May 11 am
Star & Shadow Cinema Newcastle
We are a group of people who meet together to act collectively to solve problems with the benefits system. Anyone is welcome to join us, particularly people claiming benefits of any sort (e.g. JSA, ESA, DLA, Incapacity Benefit, Housing Benefit, Income Support, Carers Allowance, Tax Credits, Pension Credits, etc.), and unemployed workers, unwaged people, etc.