Yet another young man, who had the strength and courage to take a stand against the collective punishment of 1.5 million people in Gaza during the Gaza bombing last year, is in court on Monday.

Martin Askew, a writer from London, faces a lengthy prison term if the jury find him guilty of violent disorder. Mr Askew was himself brutally attacked by a police sergeant who gave evidence last week saying he "hit him as hard as I could" in the head with his full-body shield. The jury had earlier seen footage of Mr Askew showing peace signs to police lines moments before he was attacked. The police sergeant in question said he "jabbed" Mr Askew because he had been "distracting" police and had to "take him out". 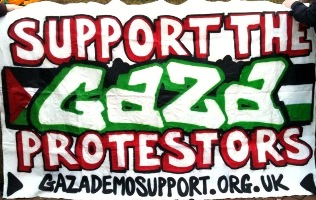 During his cross examination Mr Askew confirmed that had the cut to his head gone five inches further across he would not have survived. He sustained 70 internal and external stitches and a broken nose as a result.

Mr Askew has three children all under the age of 10 and his family have undergone severe trauma since his arrest. He has had his passport confiscated off him and like many of the other defendants was treated as a terrorist suspect during police investigations.

The court also heard on Friday from character witnesses, including Mr Askew's former employer Guy Ritchie. These witnesses all testified to how Mr Askew is a compassionate, considerate, family- oriented man of exemplary character.

Like many of us Mr Askew too was moved and outraged by the bombing of one of the most densely populated civilian areas in the World, the killing of 1,440 civilians, 430 of whom were children, the bombing of schools, universities and most other infrastructure. Despite these war crimes, international governments including our own observed silently and failed to act compelling thousands to protest against these inhumane and criminal acts.

Now rather than being praised for their moral convictions, many young men and women are being persecuted by the police and judicial > system. To date, 24 protesters have been given custodial sentences ranging from 12 months to 2 years and another 50+ await their fate.

The trial of Mr Askew is likely to come to a conclusion on Monday or Tuesday. Come and join us in an act of solidarity all day on Monday (9.30-4.30) with the protester and his family and condemn both the police and the judicial system for criminalising these individuals.

A Gaza Demonstrators Support Campaign spokeswoman said: "We cannot and will not be intimidated into standing by in silence while these protesters are unduly punished and will continue to take a stand against injustice where ever it takes place, at home or abroad."


The protest is supported by: