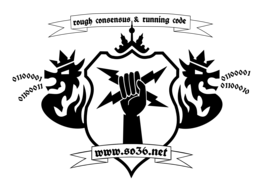 The Berlin police have searched on Monday from 10 clock the Berlin Internet provider SO36.NET. The aim of the campaign was to identify those responsible for anti-militarist bamm.de website. The site of the National Federation of Berlin and Brandenburg, the German Peace Society - United conscientious respondents (DFG-VK) is reached at

Specifically affected by the search were the server rooms of SO36.NET and the private residence of a person's registration as technical contact for the domain at the registry for bamm.de Domains DENIC. Officials of the state criminal office in Berlin, first seized several servers. A short time later, the prosecutor's decision classified the seizure of the servers, however, as a disproportionate and took him back. Then the servers were returned without data were copied by the officials. Update: In the private residence were seized two computers and several hard drives and taken away.

Only last Monday, the police had searched in the same matter to the bookstore "black tears" in the Berlin Mehringhof. Today's search was justified as in the preceding week: on the Flyers website bamm.de one is set, the celebrated under the theme "parties, as they're" on the death of Bundeswehr soldiers to a "Schampussaufen" calls. The action was supported by the DFG-VK outed early April as a satirical provocation and declared ended.

The police assumed the less the person in charge, "the soldiers of the armed forces stationed abroad to deny a right to life and to influence by calling for celebration and the sense of security of military personnel and their families strong." From screening is probably promised the police instructions, "to see which is the one who made the adjustment or modification on the website.

It is a scandal that critics of the war effort are faced with state repression, while at the same time the investigations of the Federal Prosecutor's Office against the set for "Kunduz bombing" responsible Colonel Klein.

SO36.NET is a non-commercial Internet provider left. It provides infrastructure and technical services for political groups and individual persons. Since some time SO36.NET is targeted by the investigation authorities, because it is committed to free and secure Internet communications. Last SO36.NET on 9 May 2007 in the context of § 129a-search procedure before the G8 summit in Heiligendamm. These searches have turned out in retrospect to be unlawful. With their raid violated the state criminal office in Berlin is now once again the fundamental right to freedom of expression and the secrecy of telecommunications. Opposition to the war in Afghanistan and hosting political websites is not only legitimate but necessary.