A march and rally at the London Olympic site in Stratford on Workers Memorial Day remembered the deaths of workers killed on the Stratford City and Olympic sites. Hundreds of building workers stopped work to remember their dead colleagues and call for stronger safeguards in construction. London, UK. 28/04/2010. Photos Copyright (C)2010, Peter Marshall, all rights reserved. 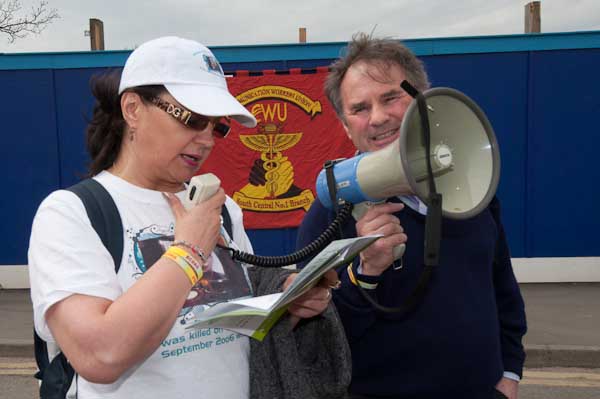 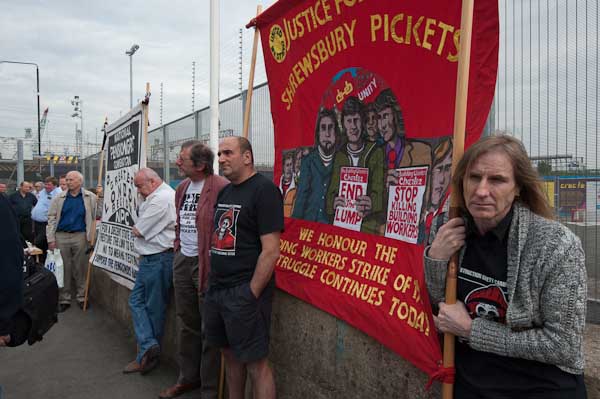 Banners in front of the Olympic fence 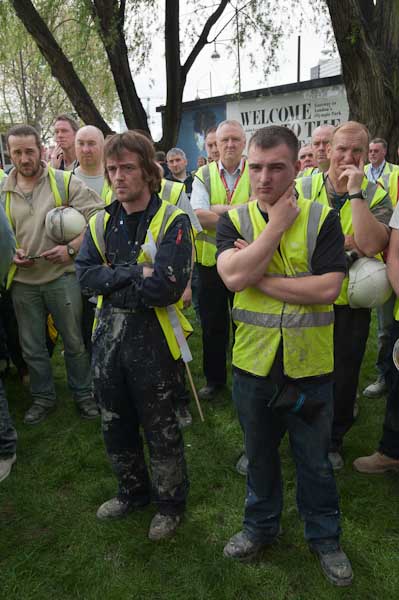 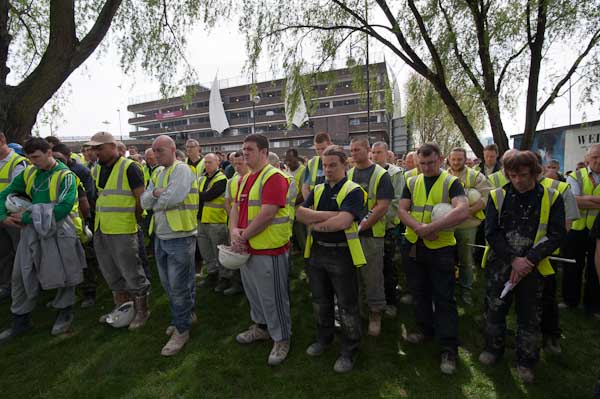 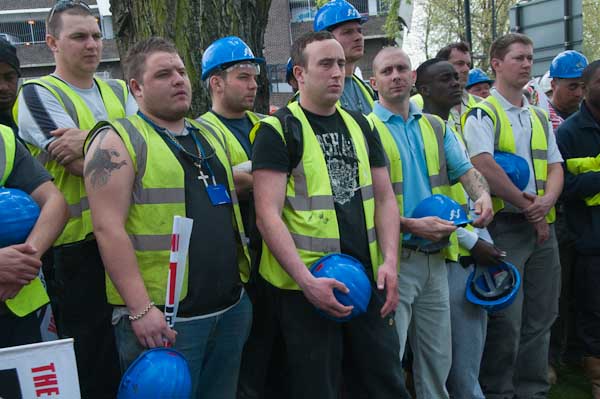 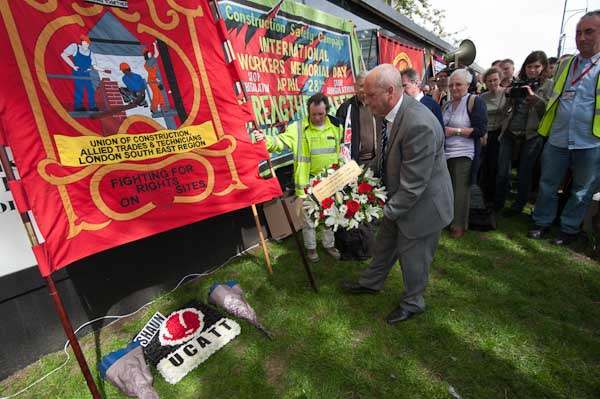 For some years the Construction Safety Campaign and UCATT, the Union of Construction, Allied Trades and Technicians, which has 125,000 members in the building industry, supported by other trade unions and safety campaign groups, have held events in London to mark International Workers Memorial Day on 28th April. 2010 was the first year that the government has officially recognised the day.

Earlier in the day a ceremony and wreath-laying had been held at the statue of the unknown Building Worker at Tower Hill in London, and a large cloud of red balloons had been released to remember the workers killed at work over the past year.

Late in the morning, around a hundred trade unionists met by the entrance to the Olympic Site in Pudding Mill Lane for a short rally before the march addressed by Tony O'Brien of the Construction Safety Campaign, Simon Hester of Prospect (and an HSE inspector) Liliana Alexa of the Battersea Crane Disaster Action Group, whose son Michael was killed mending his car on the street by a crane collapse in 2006, Len McCluskey of Unite and others. The march, which included family members of men who had been killed at work, then moved off and into the centre of Stratford.

Outside the Westfield Stratford City site they were welcomed by a much larger group of building workers, including people from the Stratford City, Olympic and other local sites who had stopped work to attend a rally and memorial event for Shaun Scurry, killed working on the Stratford City project in December 2009, and Henry Sheridan, a carpenter working at West Ham as a part of the infrastructure development for the Olympics who died instantly when hit on the head by a JCB extractor bucket in December 2008. Several members of the families of these men and others killed at work were at the memorial event.

In a short rally with speeches by Dave Allen, UCATT convenor for Westfield Stratford City and others (including O'Brien and Hester) we were reminded of the importance both of remembering the dead and also keeping up the fight for the living for safer working conditions. There was a minute of silence for the dead men and then wreaths were for them; after the event these were to be taken inside the Westfield site.

Construction is the most dangerous industry in Britain - in 2009 there were 53 construction fatalities, of which 11 were in London. Few of these deaths are truly accidents, and many arise from the deliberate disregard by employers of the safety of workers, "cutting corners" to get the job done faster and on the cheap. Part of the reason this remains possible are employment practices that mean many workers are not on the payroll of the company running the site, which enables the building firm to evade its responsibilities.

Another important factor is the lack of proper inspection by the HSE, which has insufficient staff. As Hester pointed out, there are only 26 inspectors to cover the whole of London, with thousands of sites, and the result is that around 90% of reported accidents are never even investigated. Yesterday construction workers held a protest outside Conservative Party HQ in protest against Tory plans to privatise safety inspections, which is seen as certain to lead to an increase in deaths and serious accidents on building sites.

This report with a different larger set of pictures on Demotix:

http://www.demotix.com/news/315359/workers-memorial-day
and I'll put it and more pictures onto My London Diary shortly: