Demonstration against Israeli exhibition at the Scottish Parliament

There was a demonstration outside the Scottish Parliament on Tuesday 26th April 2010 from noon to about 1.35pm when around 70 people turned up to listen to a number of speakers condemn the exhibition. 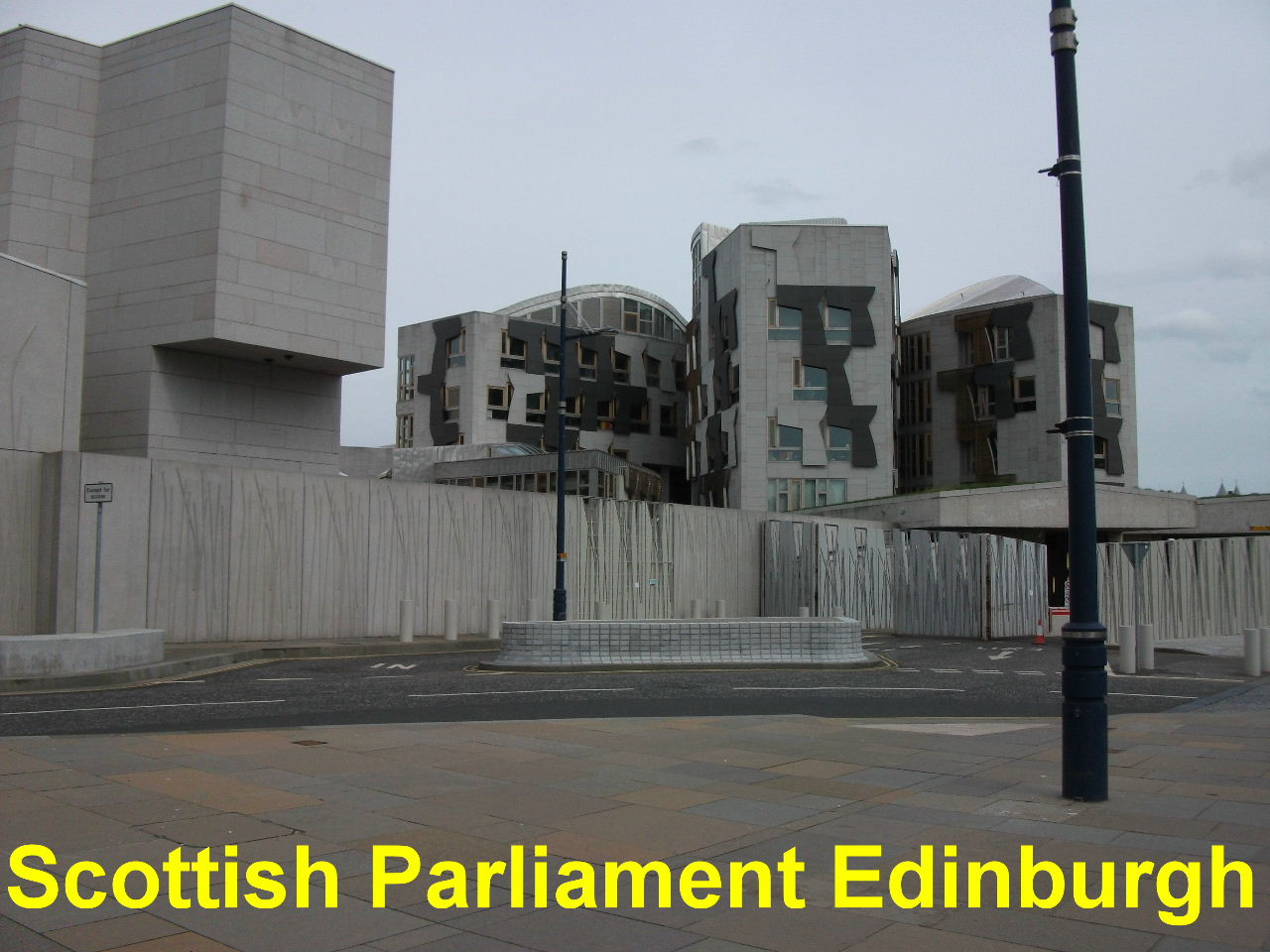 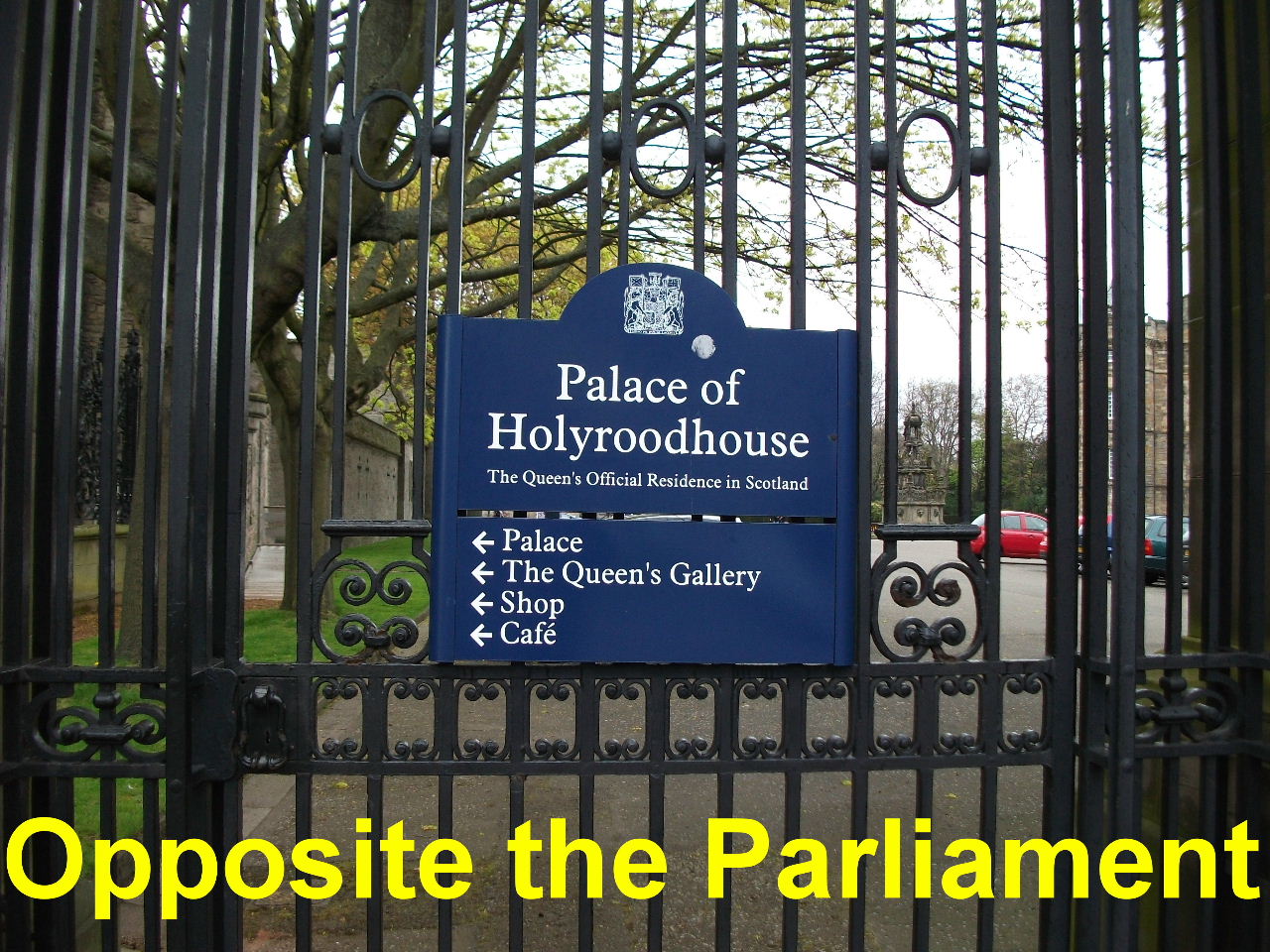 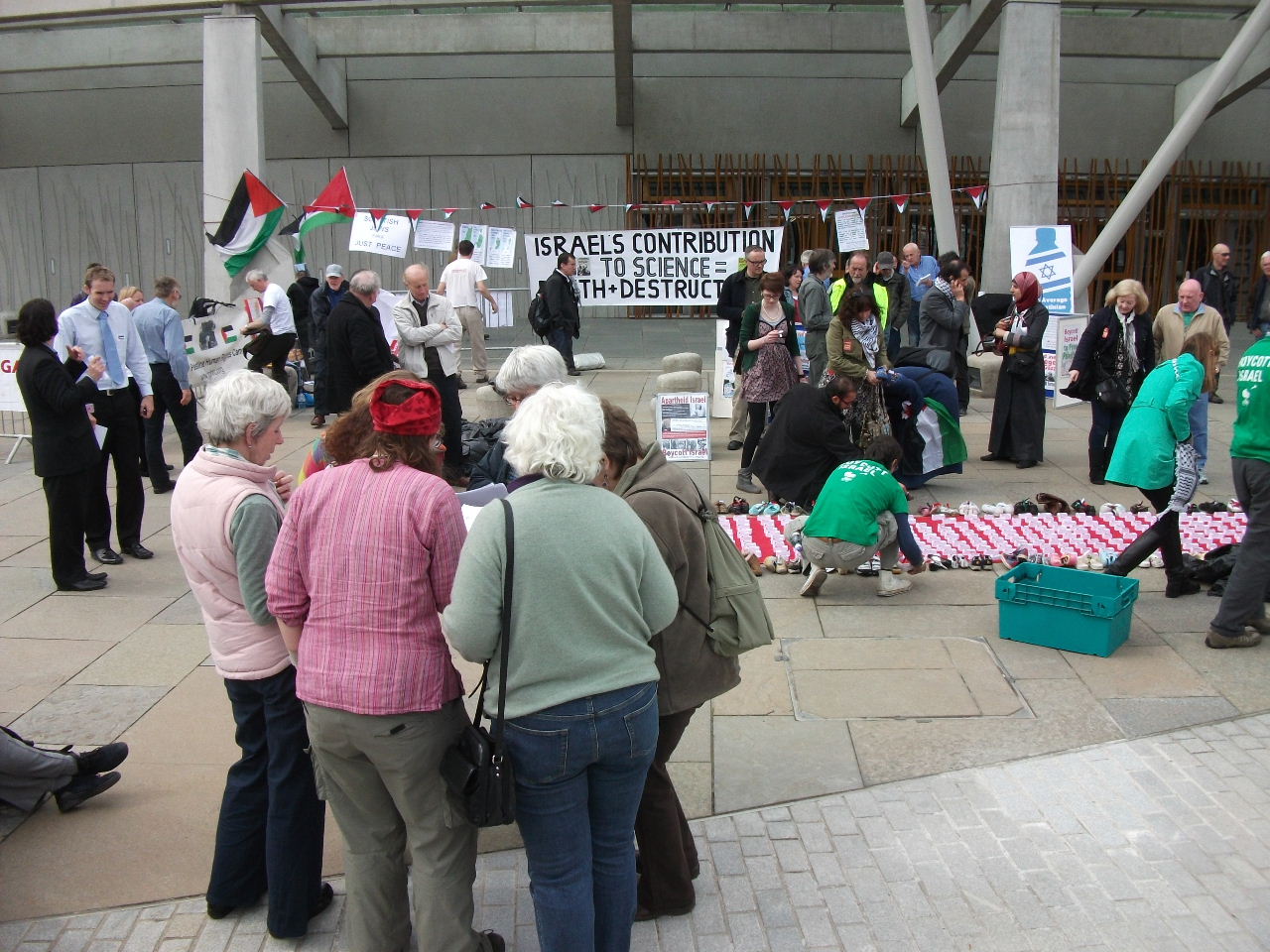 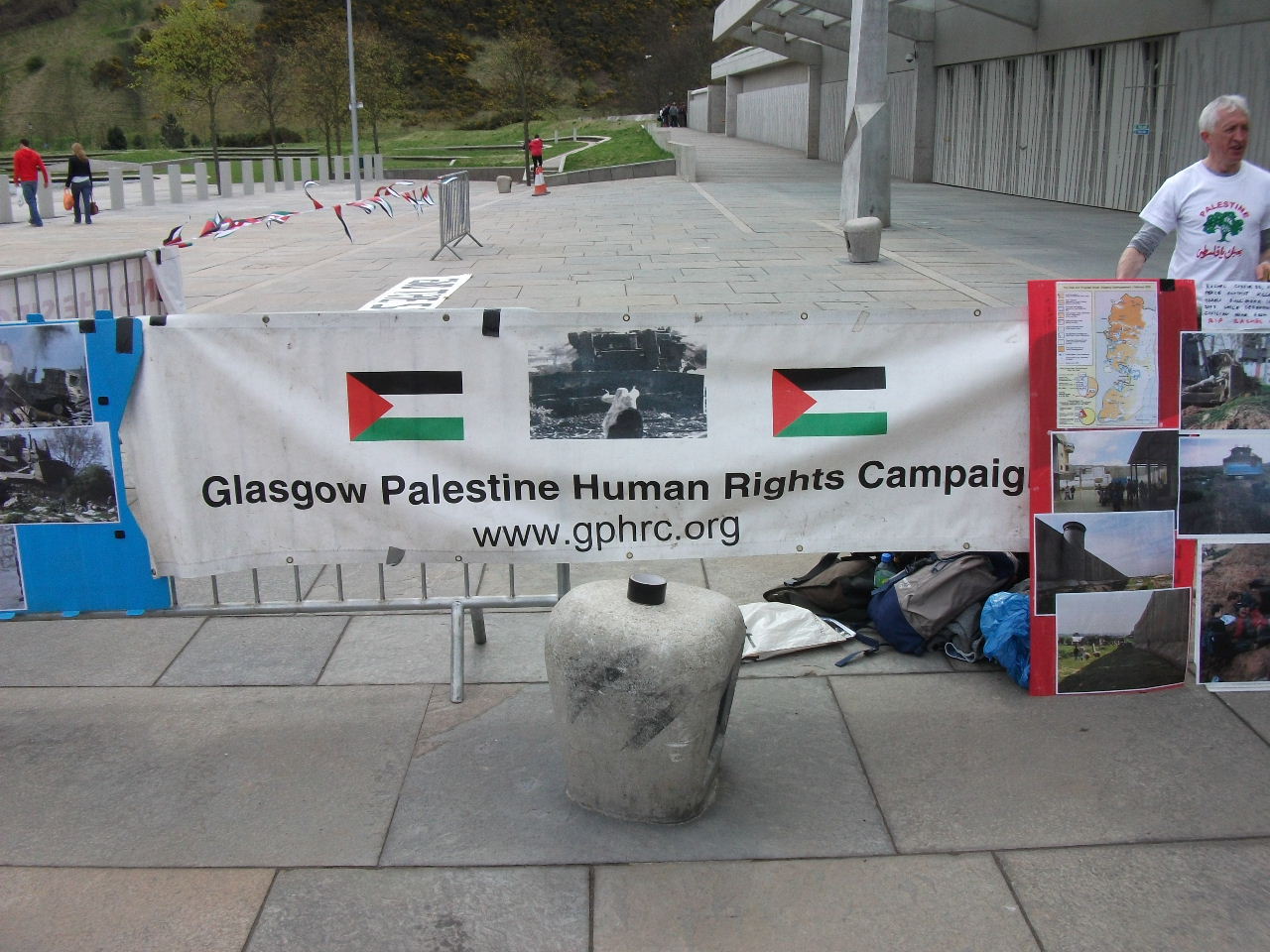 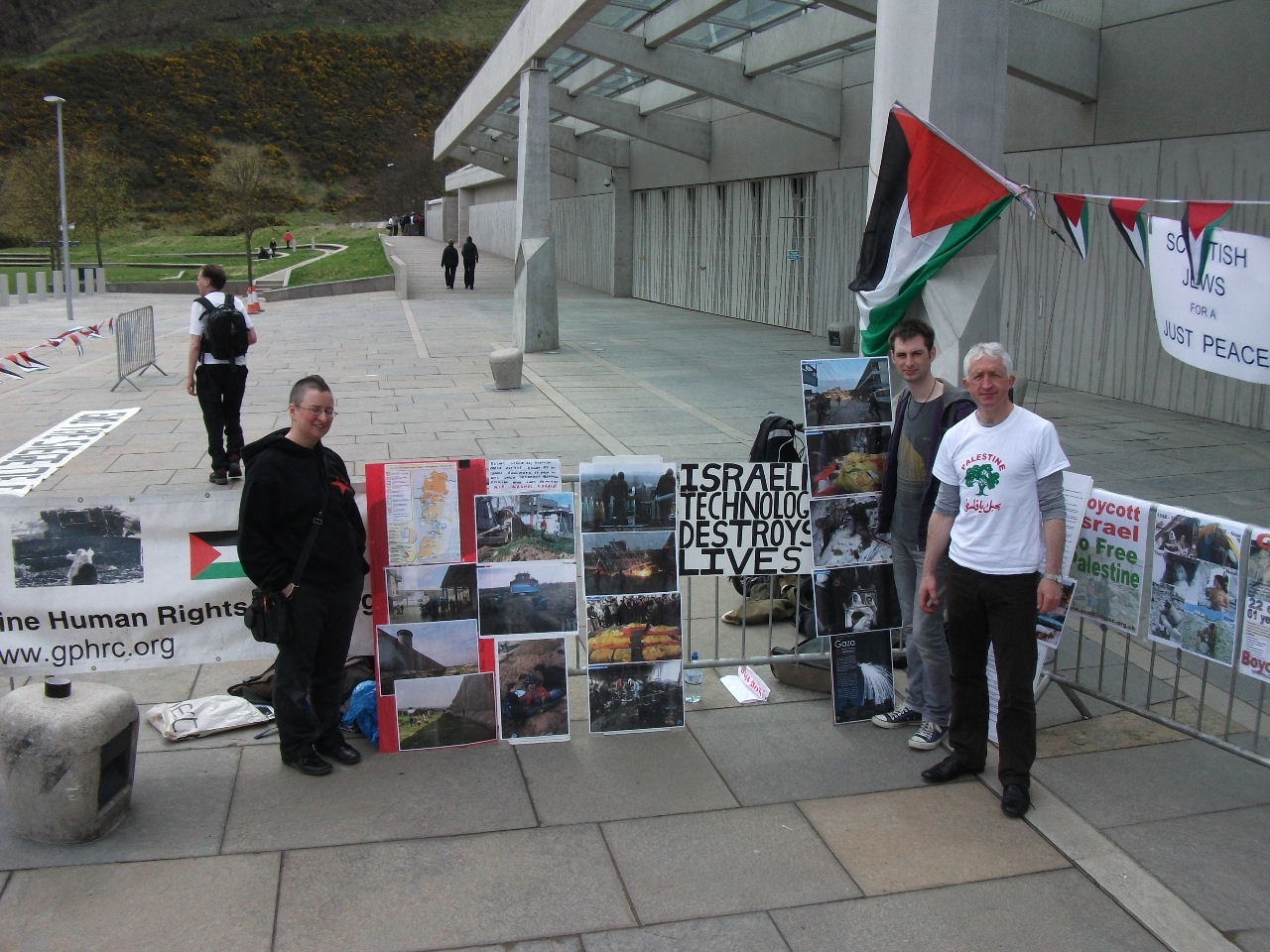 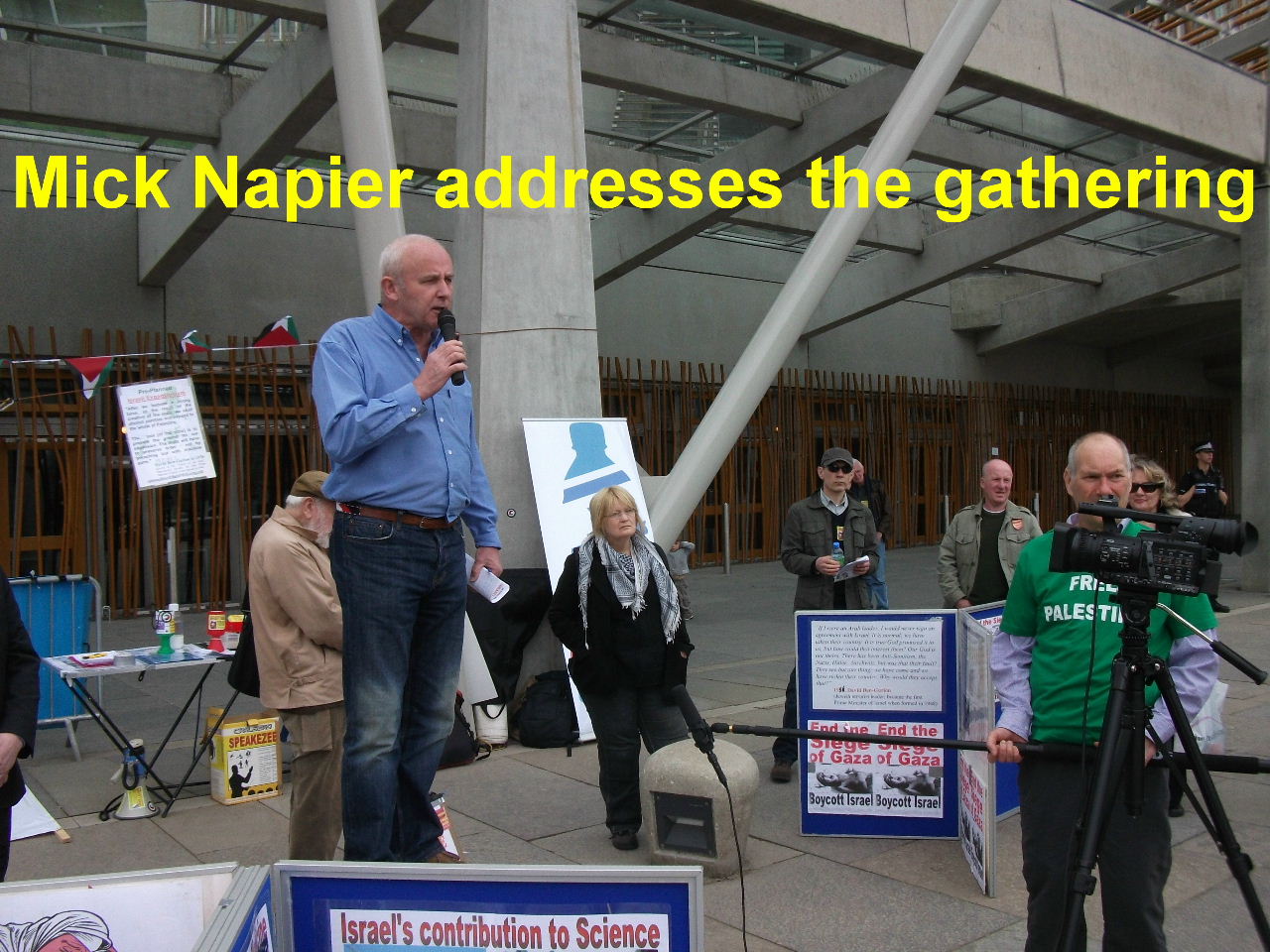 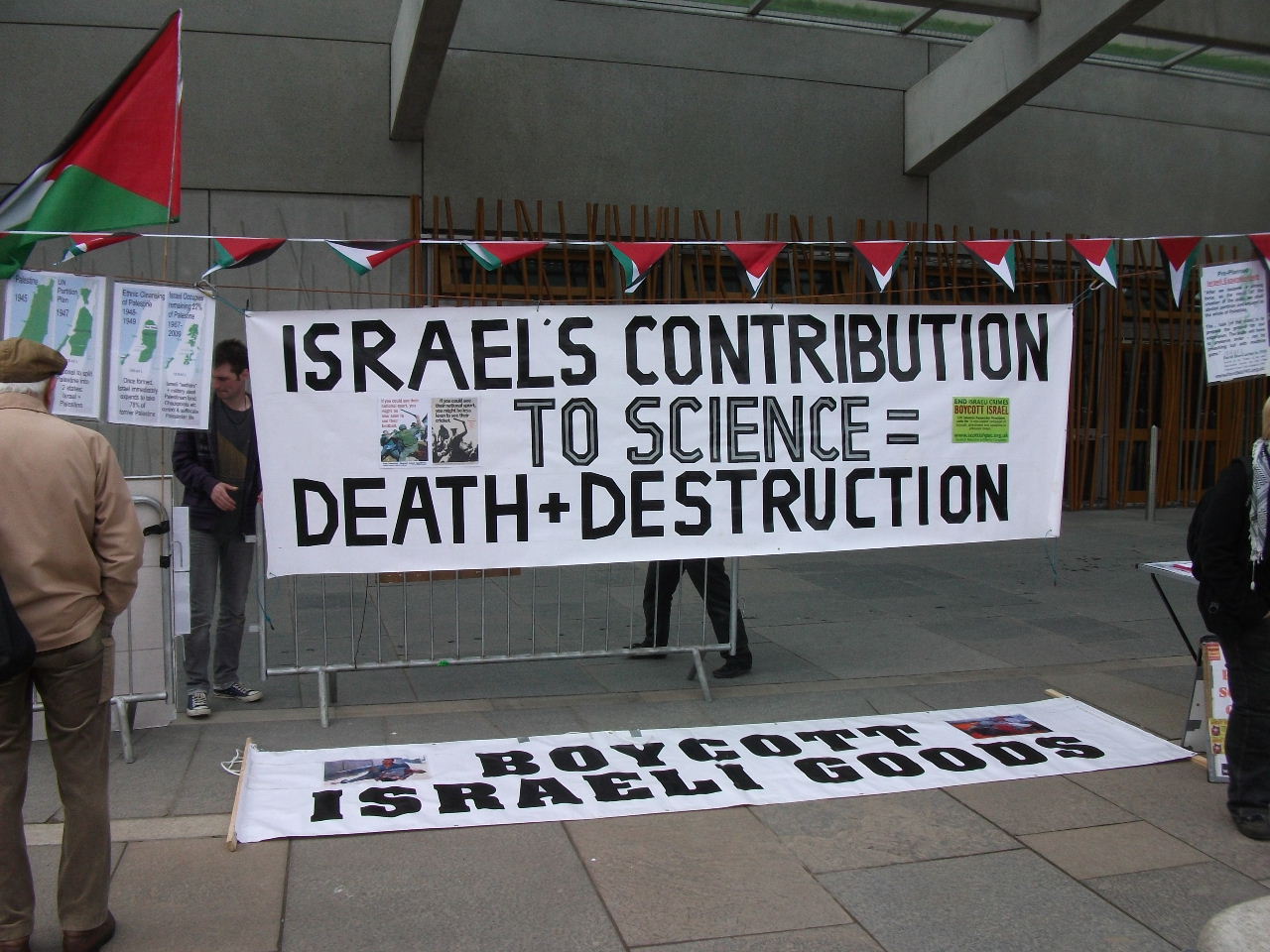 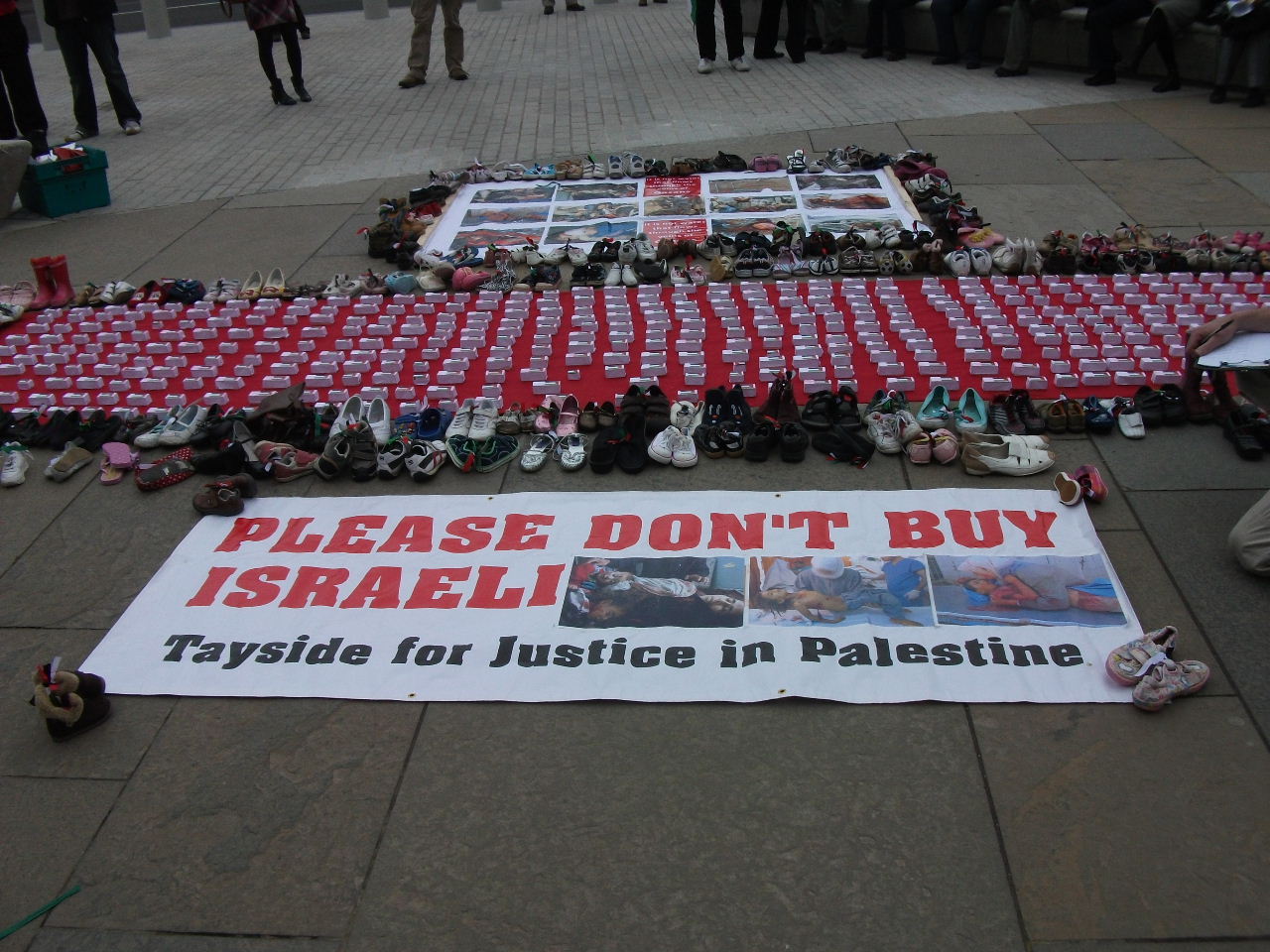 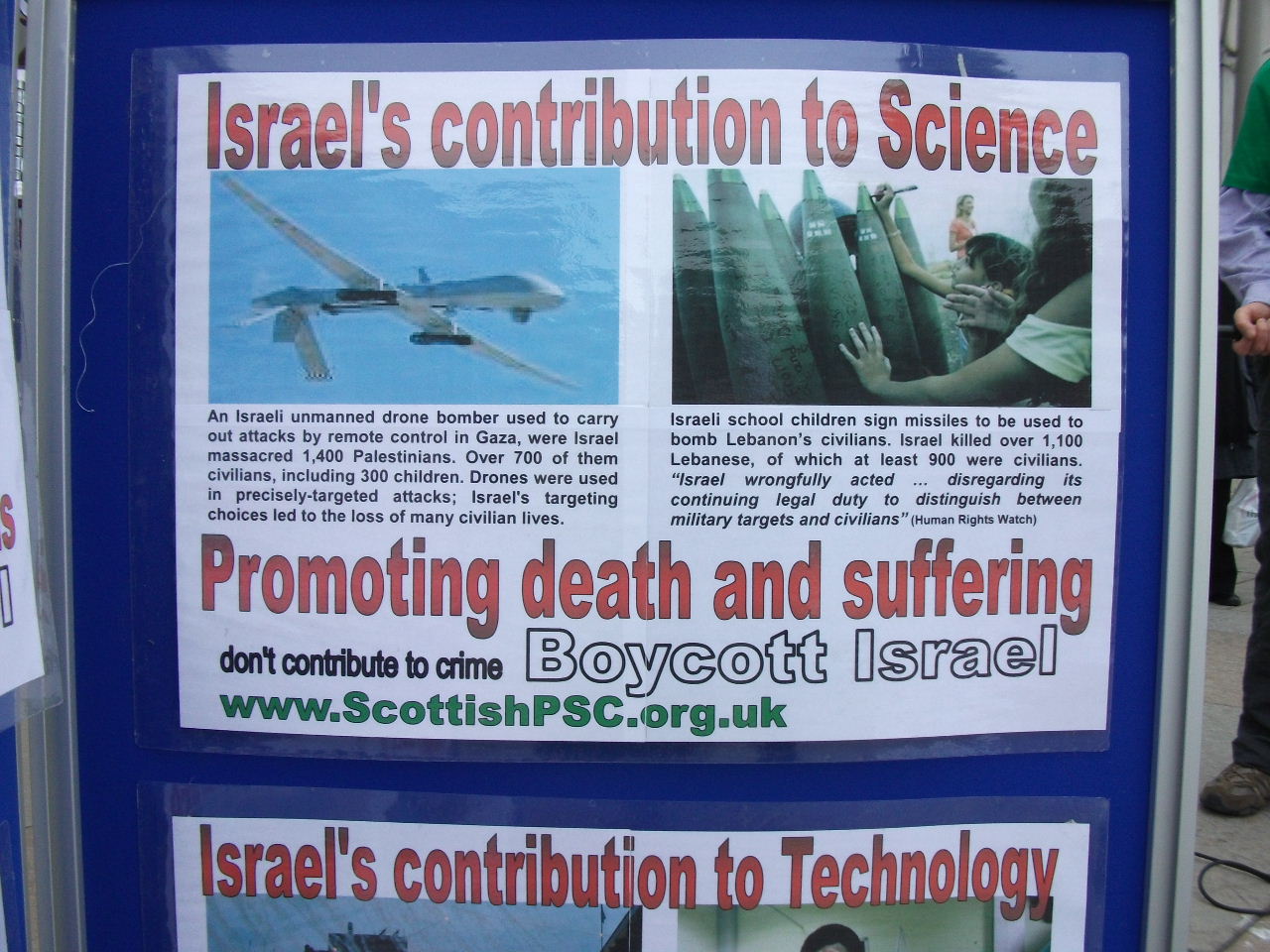 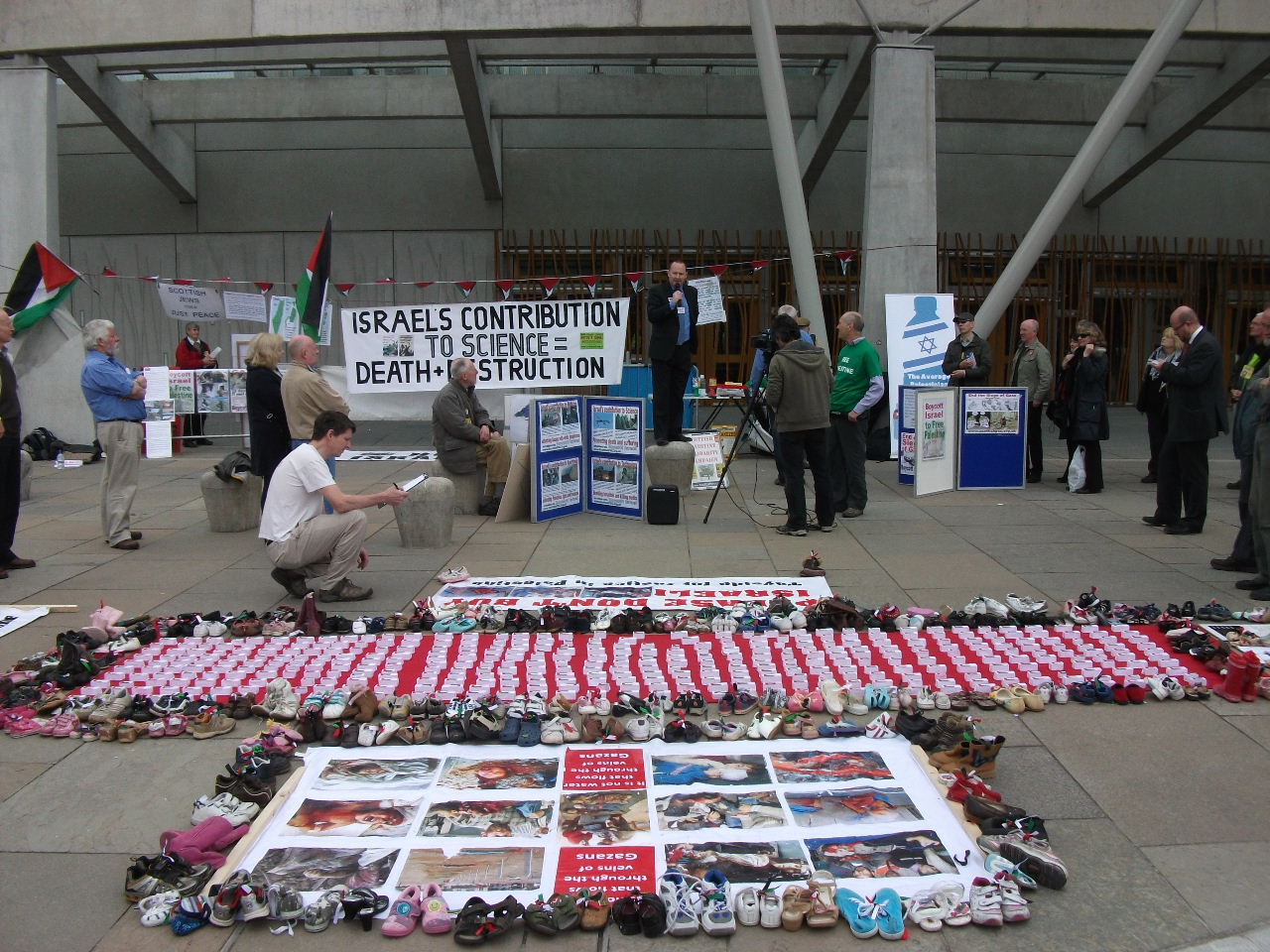 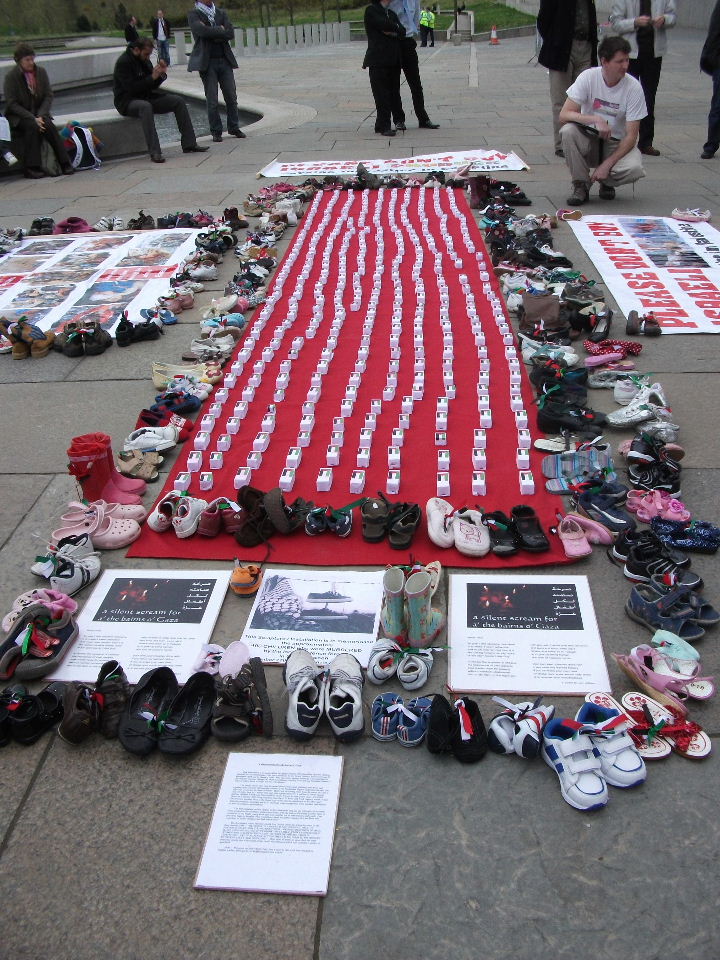 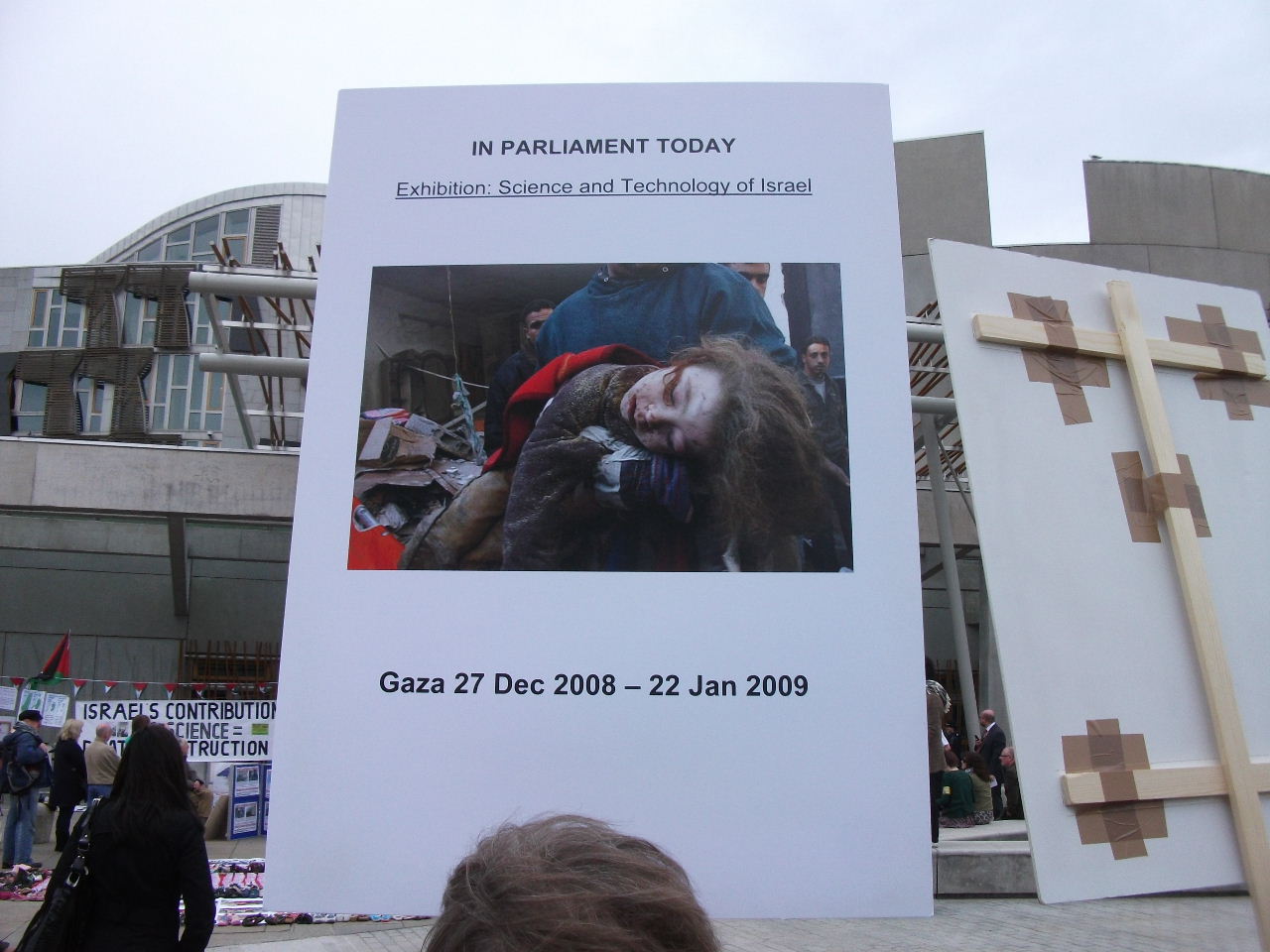 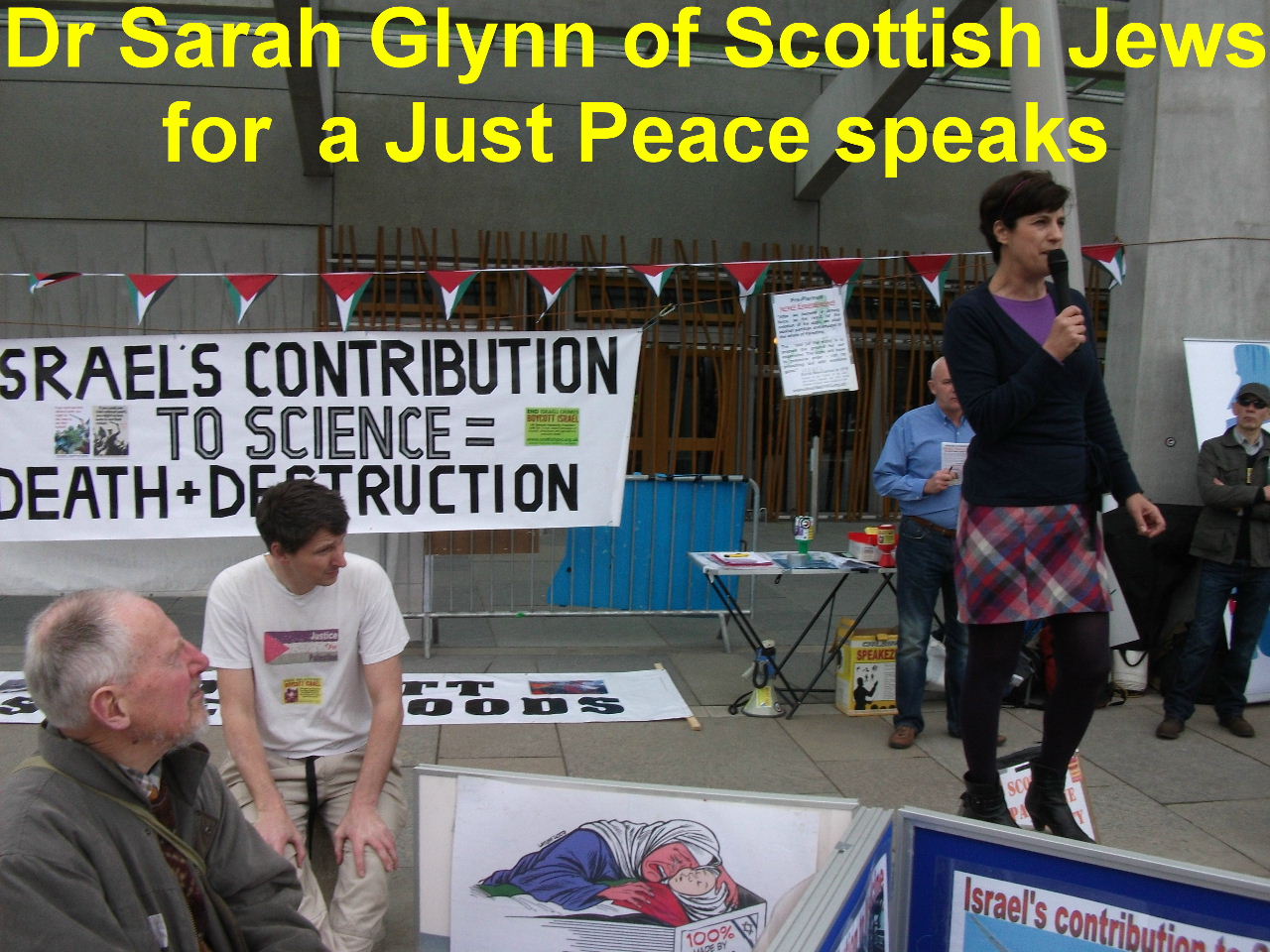 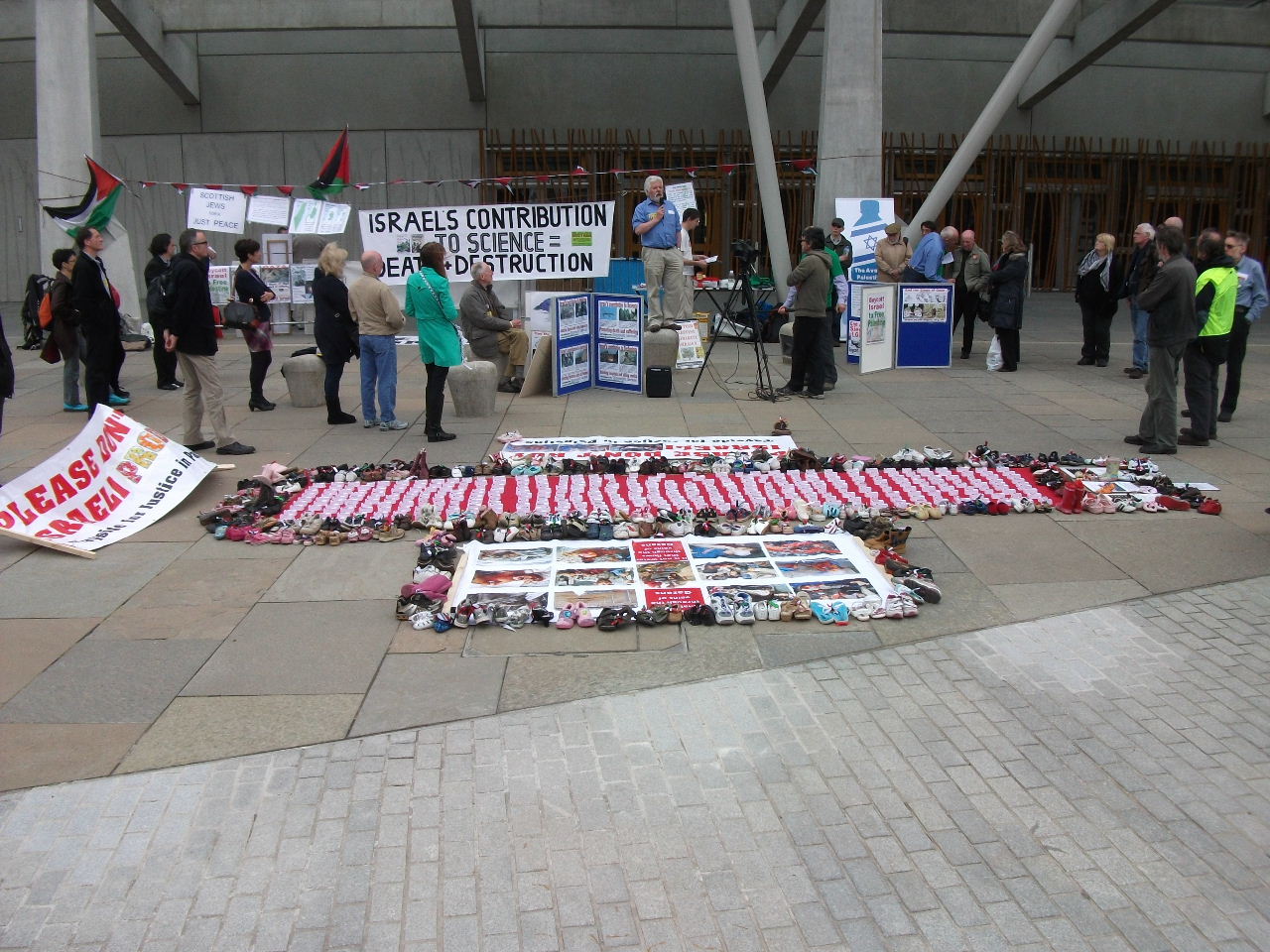 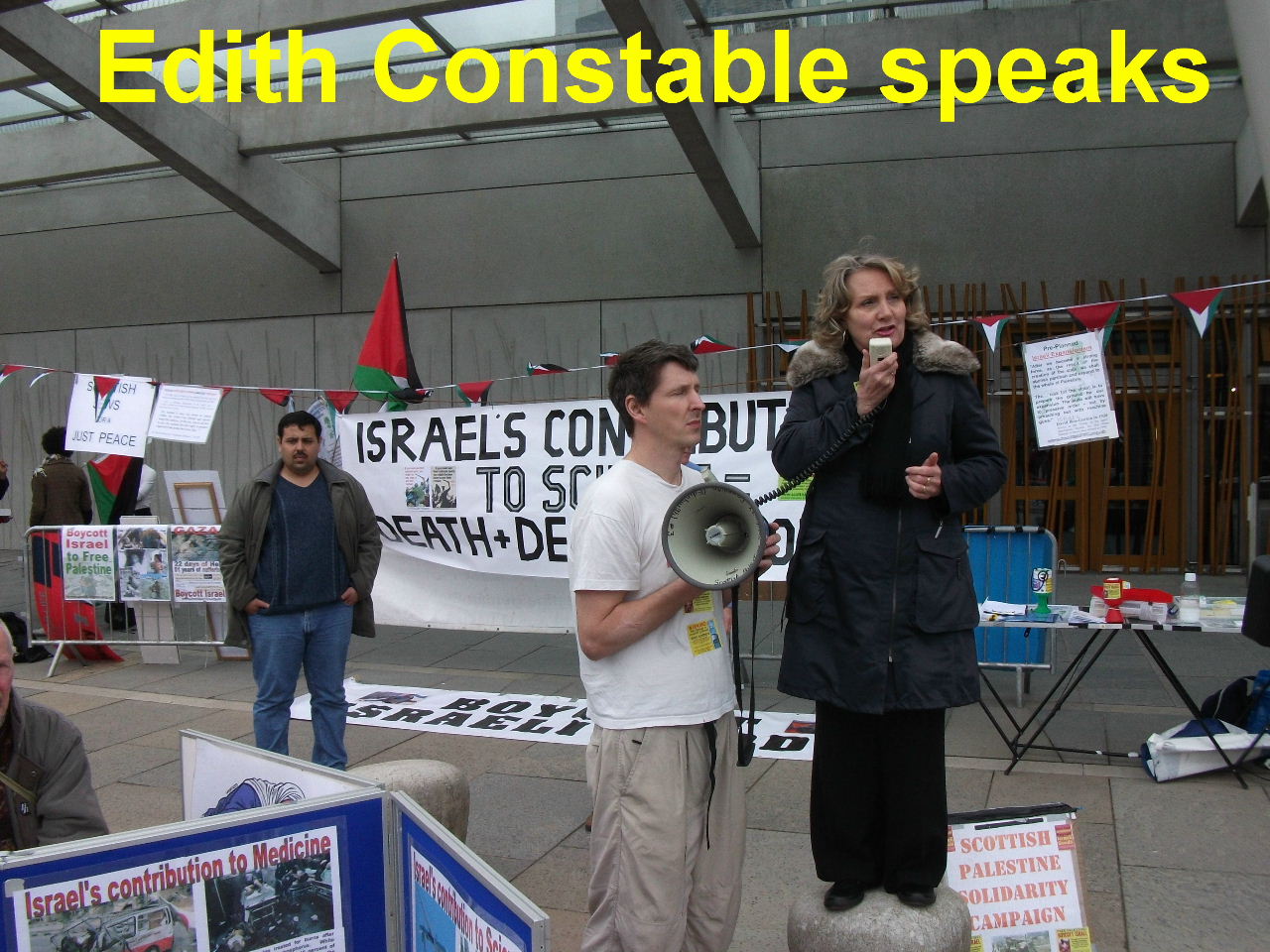 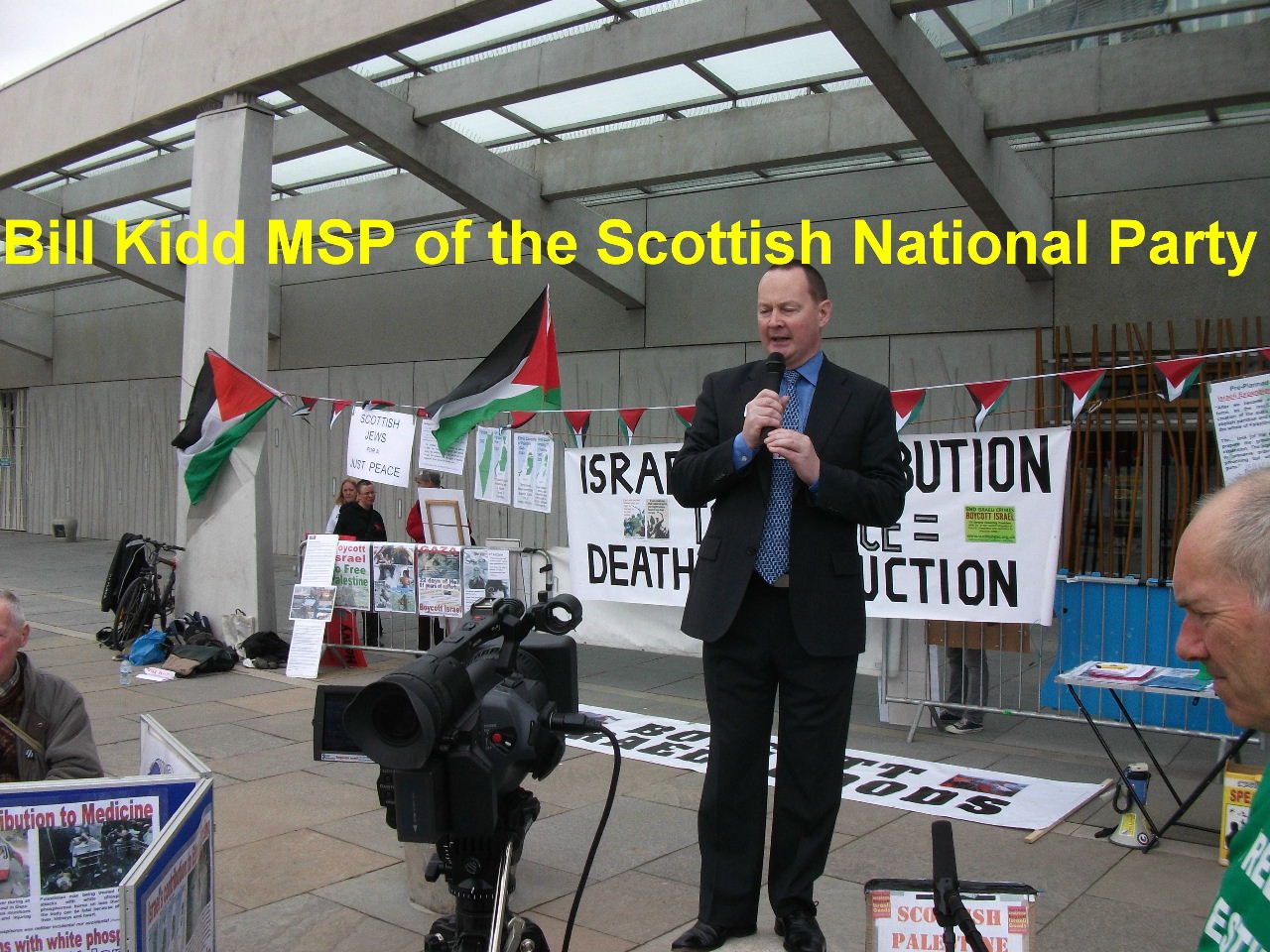 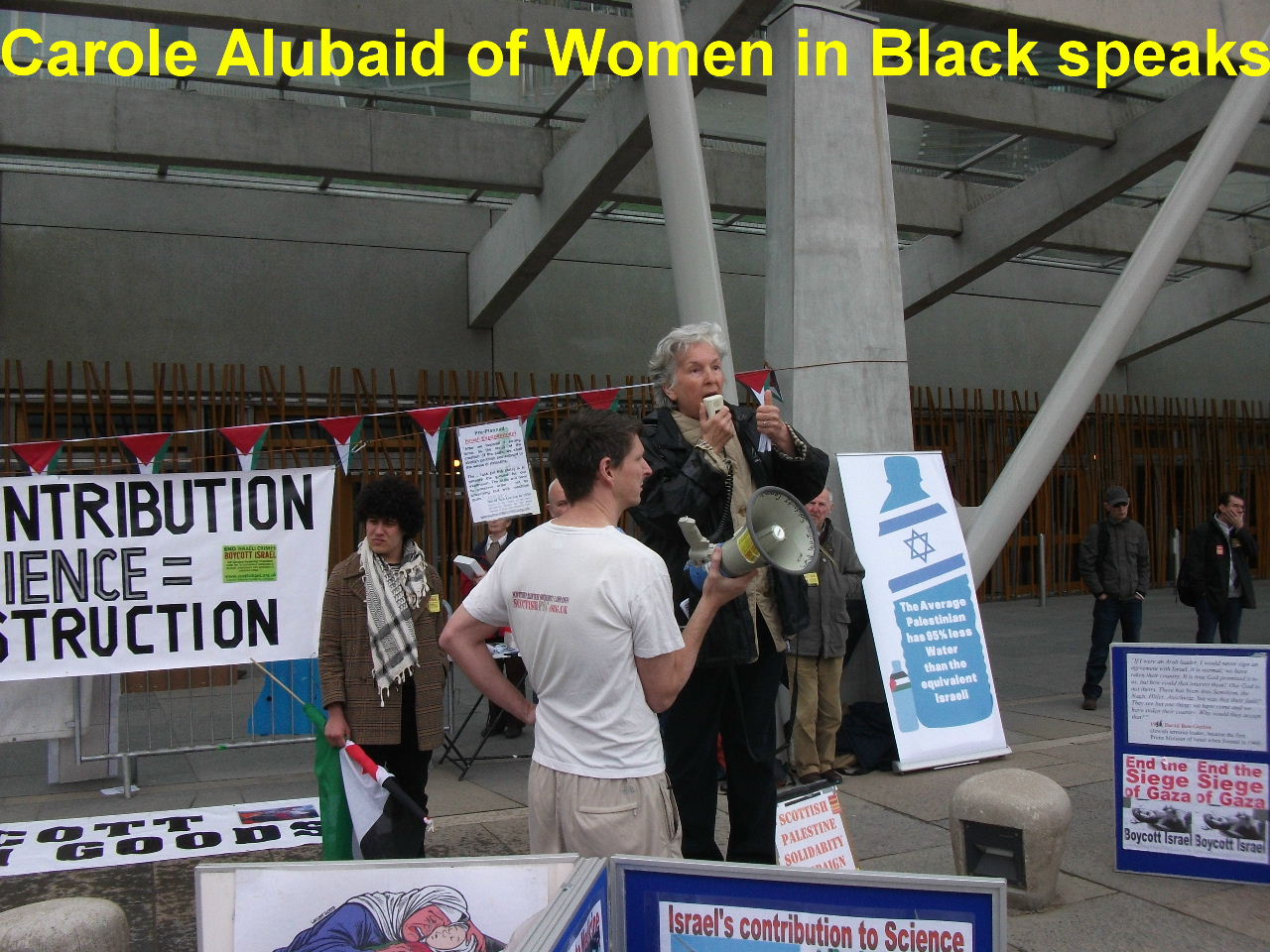 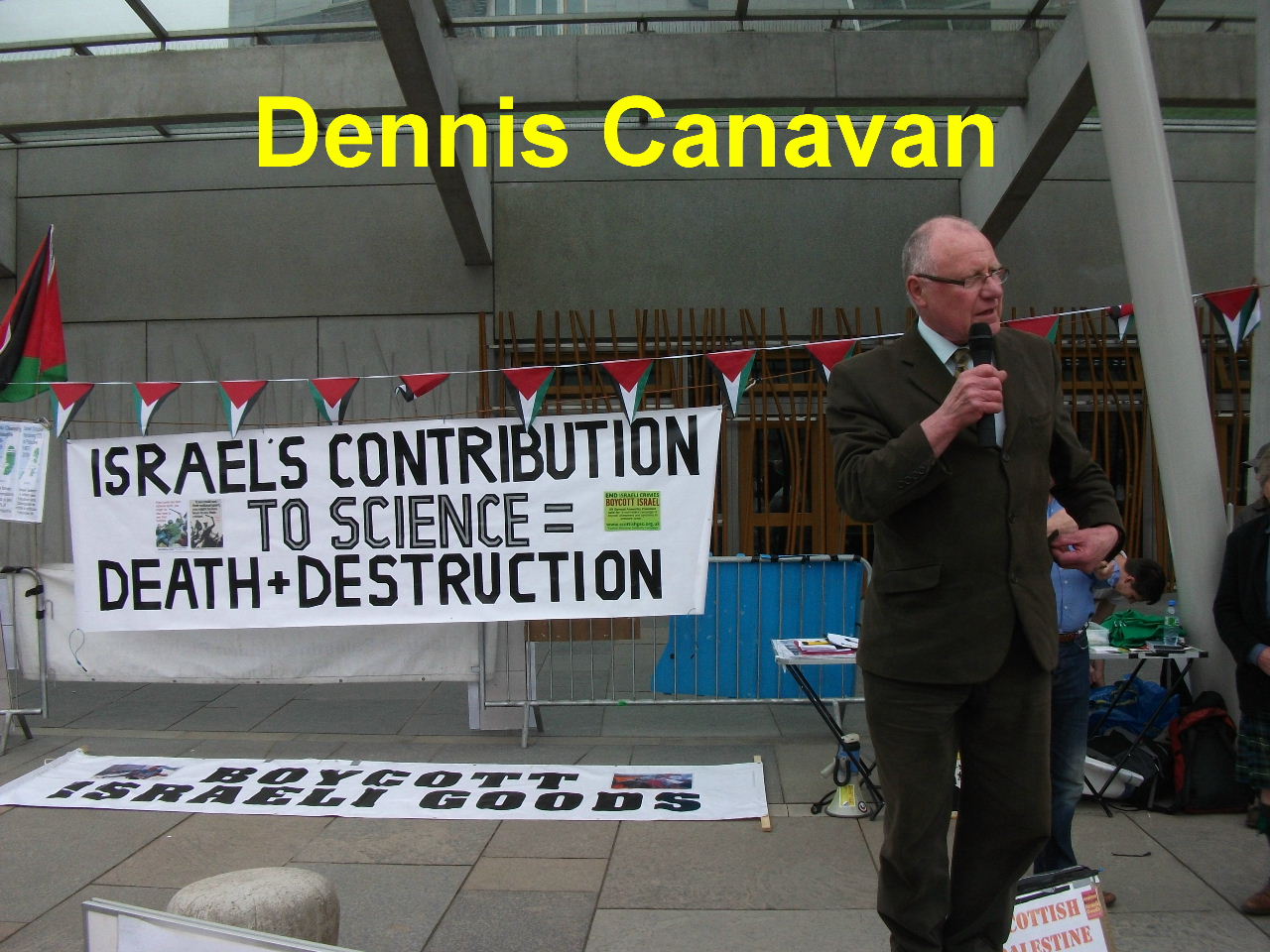 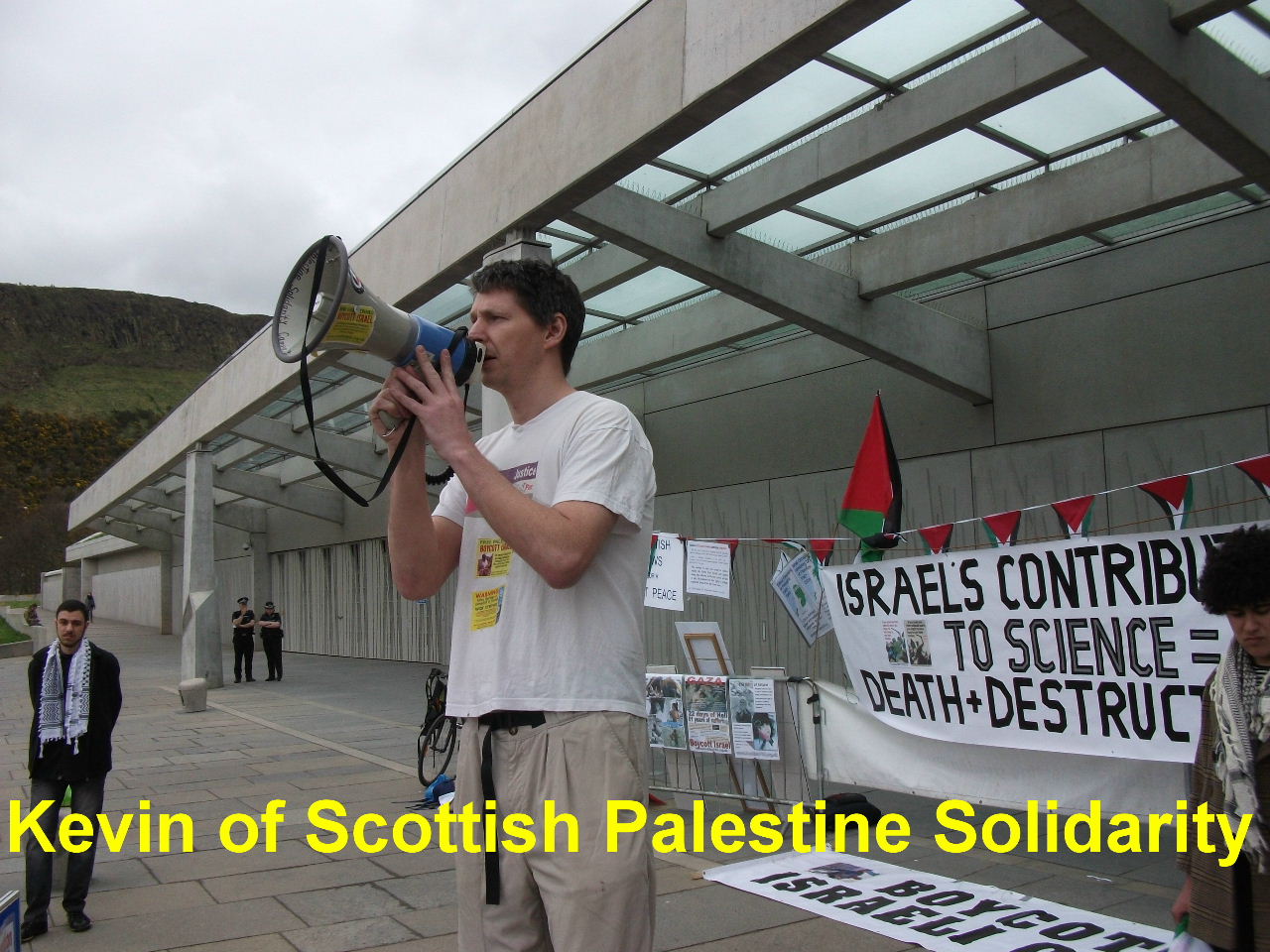 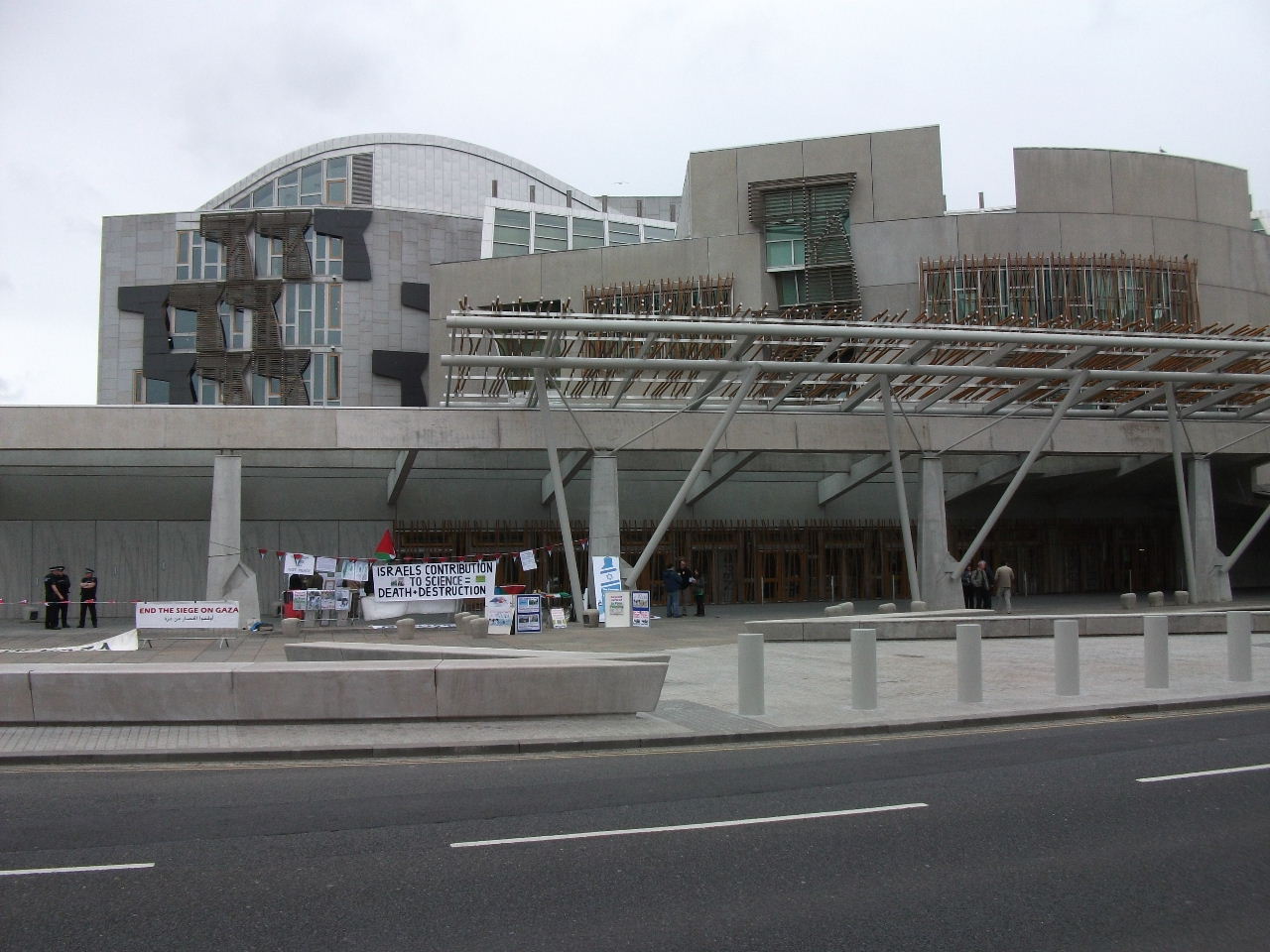 Demonstration against Israeli exhibition at Scottish Parliament on April 26th 2010

There was an exhibition of `Israel’s contribution to medicine, Science and Technology’ at the Scottish Parliament which ran for three days from Tuesday April 26th through to Thursday April 28th. The exhibition was organised by ‘Scottish Friends of Israel’ and Labour MSP for Eastwood Kenneth Macintosh. (Eastwood is a constituency of the Scottish Parliament which borders onto North Ayrshire, East Ayrshire, Renfrewshire, South Lanarkshire and the City of Glasgow.)


[In January 2005 Kenneth Macintosh (Eastwood, Labour) asked then First Minister Mr Jack McConnell how Scotland would commemorate the 60th Anniversary of the liberation of Auschwitz and the end of World War Two.

Mr McConnell said that there are a number of events to commemorate the holocaust and that he would be attending a memorial service in Hamilton later that evening. He also revealed that education packs in schools will be launched to educate pupils on the horror of WW2. ]


There was a demonstration outside the Scottish Parliament on Tuesday 26th April 2010 from noon to about 1.35pm when around 70 people turned up to listen to a number of speakers condemn the exhibition.

Introduced by chair Mick Napier of the Scottish Palestine Solidarity Campaign the first speaker was Bill Kidd of the SNP (Scottish National Party). He said that he was ashamed that the Scottish Parliament had allowed the exhibition and drew attention to the 400 symbolic Palestinian coffins which were arranged in rows outside the Parliament.

The second speaker was Khalid Awaisi from Dundee, though originally from Hebron in the occupied West Bank. Khalid said that 400 children had been killed in the Israeli assault on Gaza during operation ‘Cast Lead’ which lasted from December 27th 2008 to January 22nd 2009. He spoke of the daily humiliation of Palestinians at Israeli checkpoints in Hebron. He added that the amount of settling in the West Bank is increasing.

Next speaker Rab Paterson of the Midlothian Trade Union Council told of the British support for Israel.


Then Dr Sarah Glynn of Scottish Jews for a Just Peace spoke. She said that the idea that all Jews support Israel is propaganda. Jews who criticise Israel are accused of being racist and ‘self-hating Jews’. She went on to say that “We do not like colonialism” and she also said that she and other Jews like Alice Coy (who had come from Glasgow) were there to counter propaganda.

Around ten to one former Independent MSP for Falkirk West Dennis Canavan spoke, he told of the time he had been trying to cross the Allenby Bridge between Jordan and the West Bank when he was ordered around by an Israeli soldier with a gun. He opined that there should be self determination for the Palestinians.

A British Doctor who wished only to be identified as ‘Colin’ addressed the assembly. He told of the horrible injuries caused to the human body by phosphorus. He related a story of how a female doctor was so traumatised in treating a child with wounds caused by phosphorus that she was unable to continue.


The following speaker was Scottish Liberal Democrat MSP for Central Scotland Hugh O’Donnell. He told the crowd of the 17 hour boat trip from Larnaca in Cyprus to Gaza which was intercepted half way across by Israeli supply boats. The mission was to deliver one and a half tons of medical supplies to the people of Gaza. The delegation returned to Scotland taking two Gazans with them.

Mick Napier of the Scottish Palestine Solidarity Campaign said that the multinational French company Veolia had lost contracts worth billion of Euros in Stockholm, Sweden and contracts worth hundreds of millions of Euros in Bordeaux, France as a result of the boycott movement. (Veolia has activities in four main areas - water supply and water management, waste management, energy and transport services.)


Edith Constable from Dundee spoke next to say that she had not campaigned vigorously for a Scottish Parliament so that it could have an Israeli exhibition in it.


There was a contribution from Eddie Truman of the Scottish Socialist Party (SSP) before Carole Alubaid of Women in Black spoke. She told of the Israelis who are claiming holy sites in Iraq and also condemned the use of pilotless drones in Pakistan.

Then Kevin Connor of Scottish Palestine Solidarity spoke to say that anger had to be turned in to activity. Israel, he said, does not fear anger; Israel fears boycott and sanctions. Kevin went on to say that politicians need pushing.


Then Egyptian Scot Mahmoud Mahdy spoke to condemn the dictatorship in Egypt and to say that 99.9% of the people there are against the war. Egypt and Muslims are at one in their opposition to the Apartheid wall separating Israel and the West Bank.

Rafat Abu Shaban from Gaza thanked all those present and reminded everyone that the siege of Gaza is still going on.

At 1.35pm Mick Napier closed the event by saying that the BNP (British National Party) has sided with Israel. He jokingly apologised to the police for using a loudspeaker as these are often banned at demonstrations in Edinburgh.


20 photos of the day are included

5/ Another Indymedia report of the event: