On a miserable wet day around 400 workers marched through Dublin in the annual Mayday march organised by the Dublin Council of Trade Unions. Speakers at the end included Arthur Scargill, president of the British National Union of Mine Workers during the bitter year long 1984 strike in which 10 people were killed. 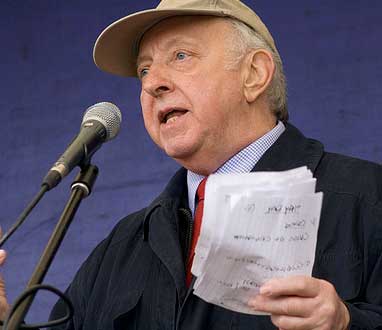 The audio recording below opens with some comments from those present on the organisation of this Mayday followed by Arthur Scargill's address. He concentrates on the need for the unions to be ready to break the law and giving the example of the Pentonville 5 who defied the laws and forced the British queen to pardon them after 2 million workers went on strike after they were jailed. The audio ends with an introduction to the anarchist history of Mayday.

"As we walked down O' Connell Street, I commented that it's not often that I walk behind the police- they usually follow me!" -Arthur Scargill.