May Day in Coventry

Yesterday was the first May Day celebration in Coventry for many years, organised by Coventry Against Racism. The organisers had planned to kick off the event with a march, followed by a "Festival" in Millenium Place. The police demanded a payment of £900 to close the street: and when organisers couldn't cough up, the march was banned.

All the same, some of the assembled May Day celebrators forgot about the ban and spontaneously took to the streets, reclaiming the road and holding a colourful procession from the Council House to Millenium place. Maybe just an act of token resistance -- but was great to see Coventry town centre give way to anarchic festivity on May Day, even if just for a brief pause. The parade was led by the banners of West Midlands No Borders: "asylum is not a crime"; "freedom of movement for all"; "no one is illegal"; and "working is not a crime". 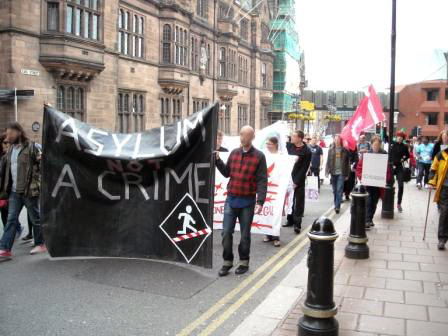 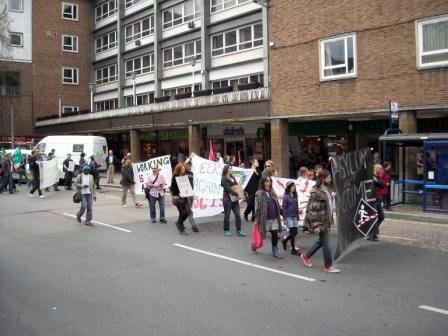 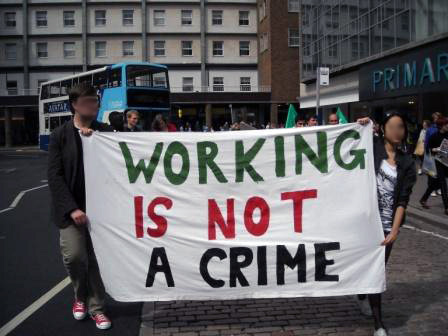 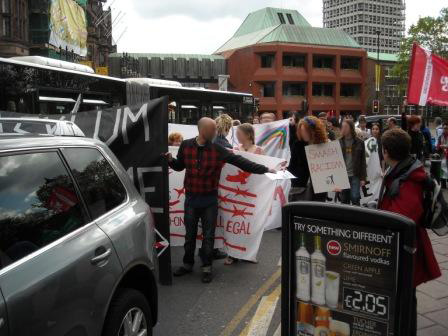 In Millenium Place there was the usual leftish assembly of speeches and stalls: though unfortunately sound system problems meant no amplified music, which should have helped to draw in more passers-by. No Borders spoke in the slot after a local labour MP, and made the point that racism is not some individual aberration but systematic to capitalism and the nation state. Racism is the border regime maintained by the UK Government, obviously supported by all the political parties currently scrabbling for
votes.

With a good showing from the warwickshire sunshine, it was a nice day out -- and we hope a good start to build on for reviving May Day spirit in the town in years to come.

Here's the text of the leaflet No Borders distributed on the day:

May Day -- a history of struggle

The celebration of May Day as an international festival for workers began in 1887, to remember the deaths of four men executed on a trumped up charge in Chicago, USA. These four men were anarchists, workers and trade unionists, and immigrants. We come together every 1st May to remember all the brave men and women who have been murdered, tortured or imprisoned for standing up for workers' rights -- the "Chicago martyrs" have certainly not been the last. And to celebrate and continue their fight.

But amongst all the workers of the world, the worst treatment is often reserved for those who have moved countries -- whether to save their lives, or simply to look for a better life. We live in a world where money moves freely, and the rich can travel at will. The weight of the racist border regime falls on working people unlucky enough to be born in third world countries.

working is not a crime

In the UK today, asylum seekers -- many of them fleeing torture and persecution in their countries of origin -- face prison just for working. Nearly 3000 people in the UK are currently locked up in immigration detention centres, without committing any crime -- and the Government is planning 1700 more places. The UK is one of only a few European countries where migrants can be detained without any time limit. Tens of thousands of immigrant workers are employed in "undesirable" jobs under precarious and dangerous conditions -- keeping the British economy afloat for slave wages.

Every year migrant workers die just trying to cross borders to get to Europe and the UK. Thousands of bodies are lost in the Sahara and the Mediterranean; others lie in unmarked graves in the "migrant graveyard" across the channel in Calais. Despite the tabloid lies, refused asylum seekers in the UK have no recourse to public funds: many thousands are left destitute on the streets, banned from working and denied access to healthcare.

The No Borders movement brings together activists from all over the world who fight against racism and the border regime. We believe that no one is illegal. We believe in freedom of movement for all. We believe in a world without borders.