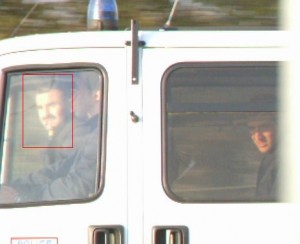 CRS unit 8 were responsible for many acts of violence and sadism against refugees, in April-May 2008 and in April 2009,  including beatings and gassing in the face…

The clearances started in September 2009 and have been going on all winter, with migrants building new shelters or finding new places to sleep only for the police to remove, set fire or dismantle the shelters.
The French authorities are currently planning to demolish the last ‘original’ squat in Calais (pre-September 09), which we call Africa House, as it is home to migrants from a few African nations (Darfur mainly, but also Eritrea and Ethiopia mostly.
The police have been raiding the squat heavily for a number of weeks, often taking all their belongings and spraying chemicals on the ground. In addition they have also been escorting a number of town and building officials around the building.
There are rumours that the authorities have made a compulsory purchase of the building, and an additional rumour suggests that they could move in to demolish the large warehouse between the 10th and 15th of May.
Eric Besson clearly stated last year that he would remove all the camps and squats, so demolition is definitely on the cards, just when…we are not absolutely sure.
If you come to Calais, bring cameras if you have them and photograph the police,  even if there are no incidents of note.
CRS, unit 8′s track record of sadistic policing:

CRS 8 tactics have been so inhumane that they have driven refugees to organise demonstrations against police brutality.
For example, in April 2009, CRS 8 officers gassed a pregnant woman.
In April the previous year, they beat a wounded Sudanese refugee while he was already on the ground. He had recently undergone a stomach operation. One of the officers, always seen with a moustache, is known to be particularly aggressive, and has been identified by many migrants on various occasions.
CRS 8 are also known to have made an Eritrean fall from the roof of the African squat.
Further, in April 2008, on a day of particularly harsh weather, the CRS ordered one migrant to remove his shoes and walk barefoot in the snow to the arrest van.
Another refugee with an injured arm asked an officer from unit 8 for medication, and demonstrated his inability to move his arm. The officer responded by taking the man’s arm and streching it out fully…”