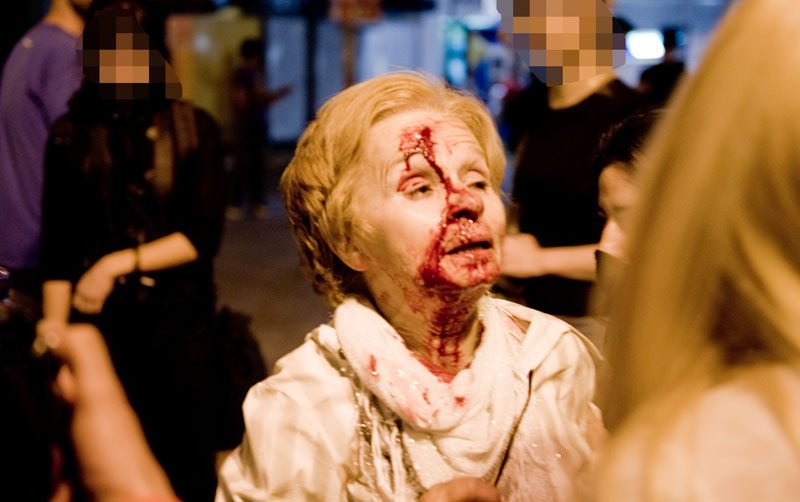 One of the most well-known lawyers, Giannis Vlachos, was severely beaten up by cops while he was walking towards his office in Exarcheia district. He tried to show them his identity card, but the cops weren't interested to see it. They only wanted to terrorise him with extreme violence.

Cops apparently have orders to terrorise lawyers. According to a post on Athens Indymedia by a protester: "I was at Korai & Panepistimiou street corner when I heard a group of cops discussing and one of them told another that their plan is to arrest lawyers for resistance against the police."

The Greek cops don't hesitate to throw blast-light grenades directly against people. There are reports of people, female and male, who suffered burned faces full of blood because grenades were thrown on them by the cops. Many journalists and anyone seen having a video or photo camera were beaten by the cops.

An old woman was severely beaten by cops on the streets outside the parliament on the Constitution Square on 6 May. You see, the cops really don't care what the constitution says, and they probably have never read it. The defenceless old woman was in blood and shocked by the extreme police violence directed against her for no reason.

Two social centres used by activists in Greece were attacked by cops who beat up and injured anyone found there, female and male. The cops even destroyed some flags and banners found nearby, and they went on to attack people inside their homes and at coffee houses around the Exarcheia district.