Kenneth Clarke famously introduced the new concept of the Public Interest Immunity Certificate (PIIC) during the Matrix Churchill Iraqi 'Supergun' trial. An illegal arms dealer trial which collapsed in 1992 because Clarke did his best to block government evidence of his complicity in the illegal arms trade under the guise of 'national security and 'public interest'. See Gerald James' definitive 1995 book on the topic "In the Public Interest: A Devastating Account of the Thatcher Government's Involvement in the Covert Arms Trade'' 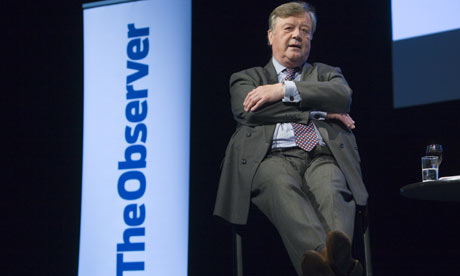 http://groups.google.com/group/pepis/t/cfdf032ac826a8ae
by Tony Gosling - www.bilderberg.org
BRISTOL 12th May 2010 - TWO senior 'Bilderbergers' have today been appointed to the new Conservative coalition cabinet under First Lord of the Treasury and Prime Minister, former Eton and Bullingdon Club's David Cameron. They are Chancellor of the Exchequer and fellow Bullingdon Club member George Osborne, and Lord Chancellor/Justice Secretary Kenneth Clarke. Clarke has been appointed to an unprecedented 'double portfolio' where he will be ruling on all senior legal appointments and precedents, also running his own Ministry of Justice.
Britain's current representative on the secret Bilderberg steering committee and Euro enthusiast Kenneth Clarke has been in government before as Health Secretary, Education Secretary, Home Secretary and Chancellor of the Exchequer under Margaret Thatcher between 1988 and 1997. Nevertheless, internet encyclopedia Wikipedia is puzzlingly inaccurate, considerably toning down Kenneth Clarke's connections with the Bilderberg conferences, describing him as an attendee at several meetings but not mentioning that he has attended every meeting in recent history and is one of a handful of organisers of the annual conference. Through his place on the Bilderberg Steering Committee he helps decide, along with Henry Kissinger, David Rockefeller and a handful of others, on the location, date and agenda of the annual conference whose corporate and central bank attendees control of most of the money in the Western World. Clarkes job as UK Bilderberg Steeering committtee rep is to come up each year with a list of powerful people in the UK and potential up-and-coming politicians who should be invited to the secretive conference.
Clarke's love of Bilderberg's power and secrecy should make him entirely inappropriate for the sensitive judicial and governmental role he now has as Lord Chancellor. This role has traditionally been seen as 'beyond reproach' because of its immense power to dispense justice, or injustice. This begs the question that at some point in the not-too-distant future Clarke's seat on the clandestine Bilderberg steering committee, closely associated with Goldman Sachs and global financial fraud, will be exposed to discredit both him and David Cameron's government. Lord Chancellor in the Labour government Charles Faulkner applauded Clarke's appointment on the BBC today, calling Clarke an 'independent' figure, but Faulkner himself was one of the most controversial Lord Chancellors ever, giving the legal advice that the invasion of Iraq was 'legal' when many lawyers believe it was one of the most bloody and serious ever violations of the UN Charter.
Despite his new job as Lord Chancellor and Secretary of State for Justice it is almost unthinkable that Clarke will not attend this year's Bilderberg conference, which Jim Tucker from American Free Press revealed in April is to be held in Sitges near Barcelona, Spain between 3-6 June 2010. Bilderbergers rightly consider themselves to be more powerful than national governments and Clarke has shown over the last 15 years or so know where hs loyalty lies.
Nervous eyes are on Greece right now and the IMF riots which have been taking place in Athens. Americans and Europeans are wondering if they will be facing the same crushing austerity measures, livelihood losses, foreign takeovers of private companies and privatisation of public services as is happening there. The colonial aquisitive tactics which Bilderberg and the IMF's financial elite have used on Third World nations for years, leading to charges of being the international Mafia, are now being turned on European nations. It may come as no suprise that the Greek Prime Minister, George Papandreou, who has so starkly failed to assert his country's sovreignty againt the IMF has been a regular attender at the secret Bilderberg meetings since 1998.
Those that dismiss the shadowy power of Bilderberg as a 'private' club rarely cite that the organisation's chairman for the first two decases, Prince Bernhard of the Netherlands, enthusiastically joined up as an officer in Hitler's SS. Bernhard was also publicly discredited in 1975 in the 'Lockheed scandal' where he was found to have taken a bribe of one million dollars to get the Duch Air Force to purchase Lockheed Starfighter jets. He was also shown to have used his place as director of KLM Royal Dutch Airlines to aid Nazis escaping justice in the 1940s along the so-called 'ratlines' to South America. A BBC Radio 4 'documentary' about Bilderberg, aired in 2003, made no mention of these facts. Bilderberg is also closely linked to the wold wide religious cult of Freemasonry with Andrew Palmer the organiser of the last Bilderberg conference to take place in Britain and Josef Retinger, Polish MI6 operative and chief assistant to Prince Bernhard in Bilderberg's early years, being shown to be part of the craft.
The Bilderberg meetings have, since 1954, asked both press and public alike to 'trust them' to manage weighty economic matters in private with no press intrusion, and politely ask national newspaper editors not to mention the meetings are taking place for reasons of 'privacy' and 'security'. With the Western financial meltdown in full flow it is hard to see how broadcast or newspaper editors and proprietors can take these assurances seriously if they have any regard whatever for the intelligence and wellbeing of their viewers and readers.

Our man at Bilderberg: Let's salt the slug in 2010
Publicity is pure poison to the world's global power elite. So we should all turn up to its next annual meeting with a few more tubs of the stuff, writes Charlie Skelton