Who is bombing in Iraq?

Christopher King argues that it is likely that the American CIA – or Israel acting on its behalf – is responsible for recent atrocities in Iraq, in order to extend and consolidate the occupation, just as it is probable that the Times Square bomber was, wittingly or otherwise, acting for the CIA or Israel, to justify the US military intervention in South Asia. 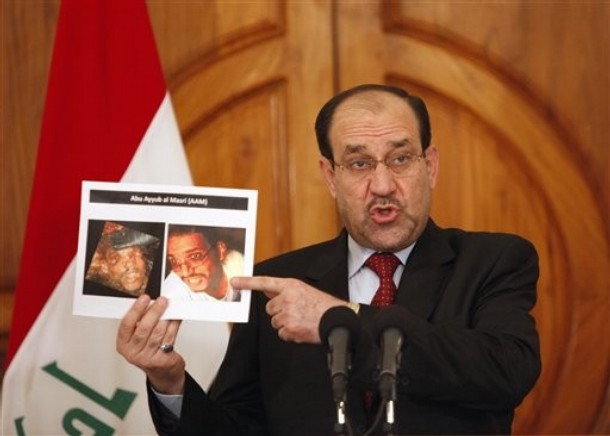 Christopher King argues that it is likely that the American CIA – or Israel acting on its behalf – is responsible for recent atrocities in Iraq, in order to extend and consolidate the occupation, just as it is probable that the Times Square bomber was, wittingly or otherwise, acting for the CIA or Israel, to justify the US military intervention in South Asia.


Who is bombing in Iraq?

Are the bombers Al-Qaeda, the CIA or Israel?


On 10 May there were more than two dozen bombings and shootings in Iraq that killed at least 85 people and injured at least 300 [1]. These were coordinated attacks, clearly by the same organization.

The American response to this and other recent attacks is to delay plans for withdrawal of troops from Iraq. Obama’s election promise was to withdraw troops from Iraq by May this year. Not only is that obviously not going to happen but we learned after his election that “withdrawal” meant leaving 50,000 troops as ‘trainers’ as well as 4,500 special forces and tens of thousands of para-military contractors.

Now, the US is reviewing even the slipped drawdown schedule out of concern for the security of the Iraqi people. Considering the million killed by the US and the four to five million refugees created by them I would not have thought that they would be bothered by fewer than one hundred dead in a little internal trouble. It might be said to be an improvement on US outcomes.

As these attacks are providing the US with an excuse for delaying even its token withdrawal however, we need to think about who is behind them.

I wrote [2] on 20 April that the probability is that the United States Central Intelligence Agency is behind these attacks, using local groups. It’s dirty tricks of this sort that the CIA does and is well financed by the US government to do. The US will never leave Iraq while there is oil in the ground, as I said [3] in April 2008. I’m amazed that the media and even the US anti-war brigade still have faith that leaving will happen. The US didn’t go there in the first place, nor build its fortresses, in order to leave. As it happens, however, the elections to keep their puppet in place did not go to plan.
This latest series of attacks on top of a long series of lesser but still deadly attacks is not the work of a small group. It’s a large, well disciplined, well financed group with substantial support.

The usual unnamed officials of unspecified nationality say that Al-Qaeda is doing the attacks. Well they would, wouldn’t they? Am I mistaken in recalling that General David Petraeus’s great success in Iraq was the elimination of Al-Qaeda? Or was that only while he was paying the Awakening Councils to go after them – if indeed Al-Qaeda was ever in Iraq at all. Since the Iraq invasion itself was based on a pack of lies there is no reason to believe anything that we are subsequently told about what is happening there or anywhere else where the US is involved.

Actually, even people on the ground in Iraq often don’t know who is doing what and allegiances are constantly changing. It’s suggested that Al-Qaeda doesn’t want the Americans to leave because the cost of the occupation is damaging America. There are also Iraqi groups who have done well out of the occupation and would like to see the Americans stay. Whether any of these groups would be capable of attacks on this scale, or would be willing to carry them out, is doubtful. I don’t buy Al-Qaeda. That’s the standard US scare story and it’s worn out, like the dozens of accusations that Iran was behind the Iraqi resistance and supplying arms and bomb technology without a scrap of evidence. All propaganda and rubbish – like Saddam’s nuclear programme, his weapons of mass destruction, his collaboration with Al-Qaeda, his mobile chemical laboratories. All now officially certified lies.

This is certain: the US invasion caused extraordinary devastation in Iraq and its continued presence is the problem for Iraqis. It’s most likely that because they have no intention of leaving, it’s the US itself that is behind the attacks. Or maybe the Israelis on their behalf, using locally organized groups.

Yes, the Israelis are in Iraq and they have no love for Arabs. In 2005 they were reported to be training Kurds [4] in northern Iraq, now a semi-autonomous region. Brigadier-General Janis Karpinski, who was blamed for the atrocities in Abu Ghraib prison, said that she was shocked to meet an Israeli interrogator in Iraq [5]. There’s plenty of scope here for deniability on the part of both the US army and the CIA which sometimes gets asked questions. With the Israeli-US axis operating in Iraq anything is possible. The Israelis are beginning to pop up in trouble spots such as Georgia where they were “trainers” as well.

The Israelis, CIA, US and UK military all regularly assassinate suspected militants along with innocent men, women and children. They consider no-one to be innocent. Nor would false-flag provocations be beyond the US-Israeli axis. On 8 June 1967 the Israelis attempted to sink the USS Liberty in an attack that left 34 American sailors dead and 173 wounded. The American Department of Defence colluded with Israel. It recalled fighter aircraft that had been launched from a nearby carrier to give assistance and probably co-planned the incident. The crew was threatened and warned not to talk about the attack.

This was clearly a false flag attack that was bungled, the probable intention to blame the Syrians or Egyptians with willingness of the US to sacrifice its own ship and crew. For the story, visit the Liberty Veterans’ Association website [6] or read their report [7]. The US-Israeli axis operates deeper than Americans or Europeans realize and we must be prepared to follow their thinking.

Why should we believe that the Times Square bomber, Faisal Shahzad, was briefed by the Pakistani Taliban – even if he believes it himself? Did they show him their membership cards, perhaps? Perhaps his Pakistani handlers were Taliban-certified by someone of reliable reputation and good character? I prefer a group backed by the CIA which is now publicly known to be active in Pakistan and who would like to supply evidence of the Taliban’s wish to attack the US itself. It justifies their atrocities and keeps the war going.

Faisal Shahzad’s crude construct didn’t explode and it wasn’t going to. It wasn’t even a bomb – just some petrol cans, propane cylinders, fireworks and fertilizer of the wrong sort for bomb-making. A nuisance but harmless. He had never been trained by a real bomb-maker or if he was, the crude construct was intended to merely burn. Remember the USS Liberty when you read these accounts.

These people think that it’s clever to get others to do their dirty work for them or better still, to suborn nationals of their target countries. Empires are only possible if collaborators with the occupiers can be found – and it’s never difficult. The Palestinians have Mahmoud Abbas, Iran had the Shah, Afghanistan has Karzai, Iraq has Maliki, the UK had Anthony Blair and Gordon Brown as well as the collaboration of most of the UK’s political class both in the US’s wars of aggression and its occupation of the UK with its bases. Our government has changed but as the French say, plus ça change, plus c’est la meme chose (more change, more of the same thing).
We are getting a constant stream of conflicting messages from the Americans and our own war criminals whom they have suborned: they’re leaving Iraq and Afghanistan soon but at the same time are in it for the long haul of 10 years or so. The purpose of this apparent nonsense is to give everyone something that they can hear and believe in while shutting out what they don’t want to hear. These messages have collaborating psychologists’ fingerprints on them.

This is a critical time when we need men of honesty and goodwill who will act for the good of the UK and Europe. That means leaving the Middle East and detaching from America and its crimes. Some countries are finding out how leech-like this parasitic country holds on. The Japanese in Okinawa are finding that the US won’t remove its bases on request. Germany, the Netherlands and Belgium have called for the removal of US nuclear weapons from Europe. The US says that this is an issue for NATO to decide and an unnamed official says [8] : “Single countries shouldn’t be coming forward with decisions or unilateral reviews.” So there you have it.

With the NATO First Act [9] of the United States, getting the US, its bases and its nuclear weapons out of Europe will be found to be impossible when Europeans realize that it is necessary. This extraordinary Act has it that either the US Congress or host countries can have US bases closed or redeploy nuclear weapons. Well, already it seems that individual countries can’t ask for nuclear weapons to be removed from their soil. Once on the statute books, it’s a small step to make either into both – and that seems to be the case already.

You might think that the present economic crisis and Middle Eastern war situation is bad. It’s actually much worse than that. Do you think that the US wouldn’t do in Europe what it’s doing in the Middle East? What it has done in Guantanamo? The crimes it has Europe’s politicians collaborating in? And who got the money from the worthless derivatives that our banks bought and European taxpayers are paying for? Europe’s politicians are either paralyzed in a state of wilful blindness and denial or they can view with equinamity the Wikileaks Collateral Murder video [10] and think that they and their families will be looked after no matter what the crimes – like Anthony Blair.

With America under economic and geopolitical pressures of its own making, the future for Europe is every bit as bad as it is for other countries that the US occupies. We should recall the crimes of Chilean dictator Augusto Pinochet, among which was the torture and murder of about 7,000 persons in the Santiago Stadium in 1973, outlined in this [11] Washington Post obituary. What the newspaper neglects to mention is that the United States was Pinochet’s backer.


[1] Al-Qaeda in Iraq blamed for attacks


[2] Leaving Iraq, Afghanistan and Pakistan: our education by collateral murder


[10] Leaving Iraq, Afghanistan and Pakistan: our education by collateral murder