In my life time there has never been a time so pregnant with revolutionary possibility in Europe. The 1st window of opportunity to add to take advantage in the UK may be about to pass, as state functionaries prepare Parliament Square for the Queen's state opening of parliament next Tuesday. Sanitation is not free speech! Come support Democracy Village and ask your friends and every other progressive radical group you know too - the times are a calling for revolution. Let's try and keep the square in the hands of the people! 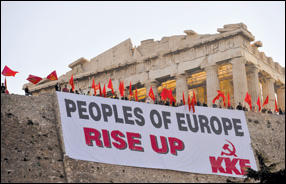 We must show our solidarity with comrades struggling in Greece, the rest of Europe and the world. Now is the time to trust, tp put away sectarian thoughts there are many causes and issues and policies to embrace and we need the them all. Time to start coming together for the new society that lies on the other side of revolution. Each country must rise up in its own way, according to its own local conditions, traditions and crop of politicians. The camp is presently under threat as can be seen at the following article, and is in danger of being misrepresented unnecessarily (and as usual) by the media.

Peace camp will be evicted to save Queen’s blushes... especially as two of her soldiers are among protesters

Let's not let the Queen's blushes, or the Telegraph for that matter get the better of us. Spread the word, we need bodies to resist non - violently and we need to get the message out to the media as they cover the story in the coming days, about this camp being anti-war but also about the new society we dream of. We need to use the media to get our message out to communities around the country so if you can make it to the Battle of Parliament Square - please do!

If we are united we can inspire others around the country and continent to join us setting up Peoples' Assemblies and Democracy Villages likewise.

Peoples of Europe Rise Up. And if it falls, see you back there for a giant picnic on the 6th June!