Shaker Aamer has been imprisoned without charge or trial in Guantánamo Bay for over eight years. He is a legal permanent resident of the UK, married to a British national, with four British children (the youngest of whom he has never met) living in Battersea, south London.

Next Tuesday (25 May), on the day of the state opening of Parliament, a demonstration and rally in Parliament Square has been organised by the Save Shaker Aamer Campaign: 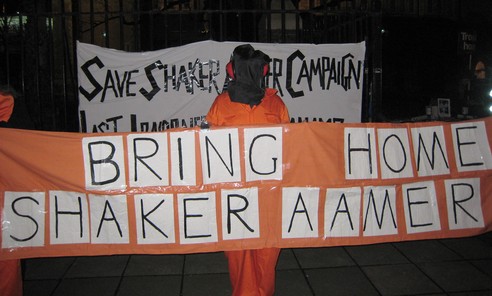 Our protest will involve everyone wearing orange jumpsuits with individual placards held high and continuously slow walking around the square. Speakers from many organisations and amongst our supporters have been invited to join us including:

Given the 25th is a workday WE will need to do more than usual to mobilise our supporters available. PLEASE approach/target your contacts and encourage them to make that extra effort, use your phone & email.

We are recommending supporters bring a picnic, as timing of the State Opening is unclear (likely to go on all day) although the standard description includes the following..........

"State Opening is the main ceremonial event of the parliamentary calendar, attracting large crowds, both in person and watching on television and the internet. The Queen's procession from Buckingham Palace to Westminster is escorted by the Household Cavalry. The Queen arrives at the Sovereign's Entrance at about 11.15am,......".

It is likely that many more people will be in the area than usual for the 'State Opening' so there will be ample opportunity for publicising our campaign.

This action is supported by the London Guantánamo Campaign

Some background on Shaker Aamer's case: