On 19 April, a barrack on a plot belonging to the freight depot of Zurich's railway station was squatted and revived. The barrack has been empty for more than a year. The Canton of Zurich plans to build a new police and justice center for 570 million Swiss francs (US$ 500 million) on the plot. 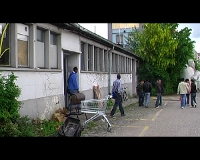 As a result of a police raid and the destruction of the Zurich Autonomous School on the city's outskirts in January 2010, the grassroots association "Education for all" was forced to relocate again. After several stops the association has now restarted to operate in the squatted barrack at the freight depot.

"Eduaction for all" is part of Zurich's Right-to-Stay Collective. For more than a year it's been offering German courses for hundreds of illegalized refugees and migrants as well as asylum seekers whose applications are being processed. The association advocates the right to education, migration and asylum.

A 10-minute video provides an insight into the Autonomous School, while students and teachers depict their points of view.

The video can be watched/downloaded here:

The autonomous media collective 'a-films' has been documenting migrants' struggles in Switzerland for one and a half years. It has published various reports and produced several short films, all of which are available on the group's website: