As airport expansion is halted at Stansted and Heathrow Manchester activists turn their attention to a regional airport using arm tubes and tripods to shut Manchester Airport down! 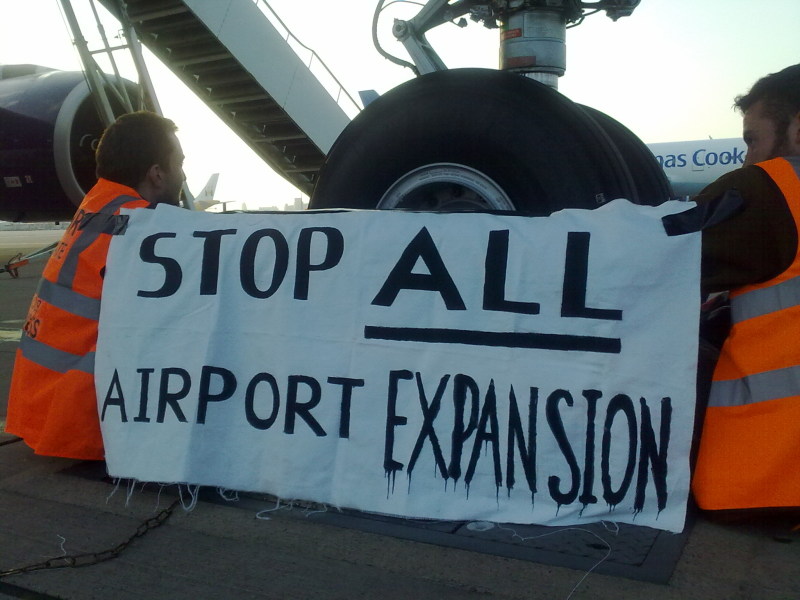 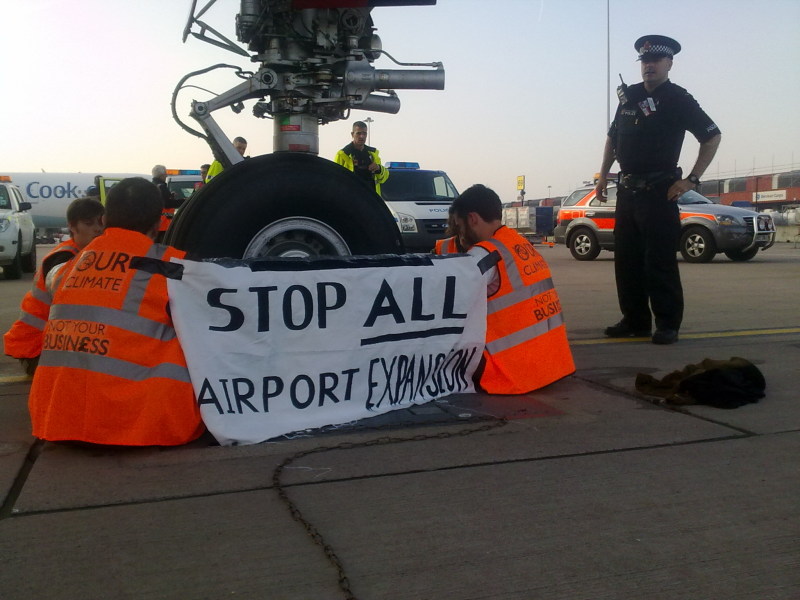 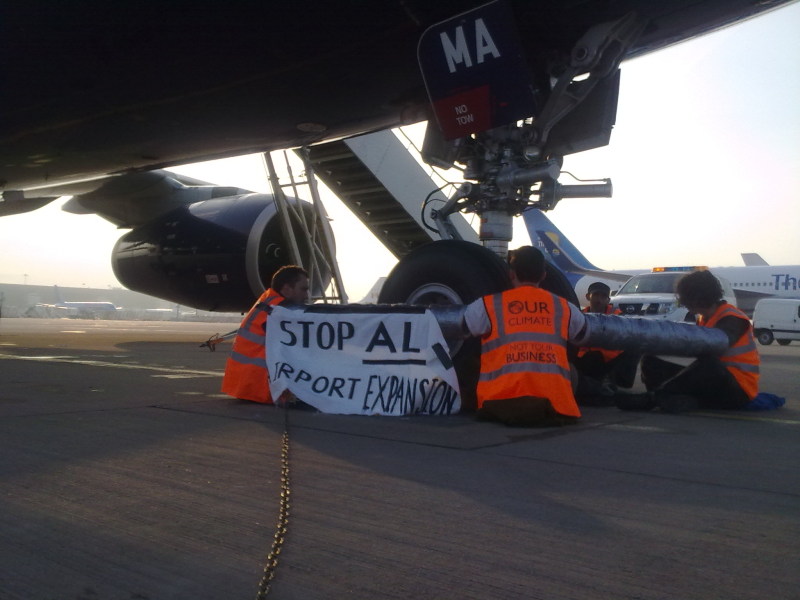 Activists from the group Manchester Plane Stupid have breached airside security at Manchester Airport today in a protest against the expansion of the airport. The protest involves two groups. The first group of 6 people cut through the perimeter fence and created a human circle around a stationary plane using arm tube lock-ons.

A second group have used tripods to blockade the road entrance to the World Freight Terminal preventing airfreighted goods from being taken in or out. They have unfurled a banner reading: “More air freight = more climate change. Stop all airport expansion now.”

The group are protesting against the recent decision to expand the World Freight Terminal which will involve the demolition of historic homes on Hasty Lane.

Lisa Jameson from Manchester Plane Stupid said, “This isn't just about airport expansion or rising carbon emissions. This is about challenging an economic system based on the absurdity of infinite growth on a planet of finite resources, a system which prioritises bail-outs for the banks and then makes us pay for it in public service cuts. Capitalism is the cause of the problem, climate change is just a symptom.”

Following the recent decision to stop expansion at Heathrow, Gatwick and Stanstead airports, the aviation industry is likely to look to regional airports such as Manchester to increase profits.

“The third runway at Heathrow was stopped because ordinary people stood up to the government at the time and the aviation industry using a broad range of tactics. Direct action has historically played an important role in creating social change and will continue to do so.”

The aviation industry consistently overstate their importance in creating jobs and their contribution to the economy.

The lack of tax on aviation fuel is costing the UK economy £9 billion per year. There is also a tourism deficit in the North West region of £2.2 billion.[1] That is the difference between what Britons flying abroad spend in foreign countries and what foreign visitors spend in the North West.

Each round of airport expansion is justified on the promise of more and more jobs. In the 1990s Manchester Airport promised to create 50,000 jobs with the second runway – but the actual number was far lower. We need to begin a just transition to a low carbon economy by creating jobs in sustainable industries such as rail and renewables”

Annie McLaughlin said, “Recently, we've seen attempts by British Airways to use the courts to overturn workers' right to strike. We support the rights of all workers to fight for good conditions. It is essential that the changes needed to prevent climate change are not used as an excuse to restrict workers rights.”

The airport, which is owned by local councils, has kept local residents in the dark about the proposed expansion plans, failing to adequately inform them that their homes face demolition.

“ With the planet on the verge of climate breakdown it is essential that the real cost of aviation expansion is taken seriously – currently emissions from aviation are not included in Manchester City Council's Climate Change Action Plan.”

The protesters say they are locked on to halt emissions and are prepared to stay for as long as it takes to get their message across. 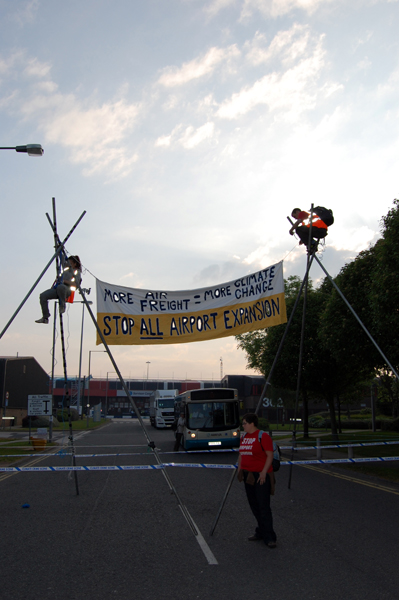 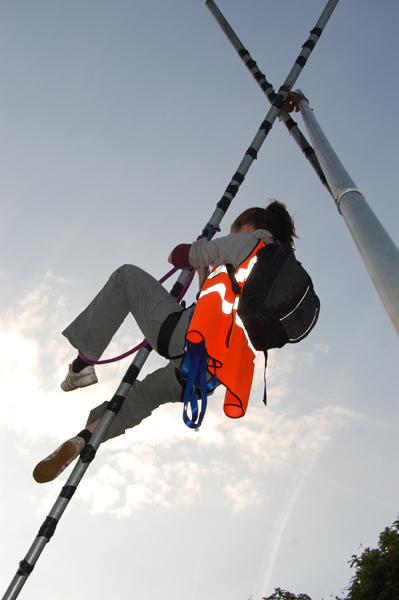 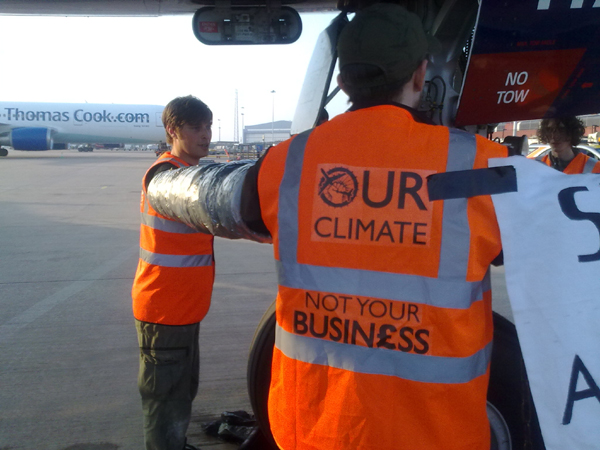 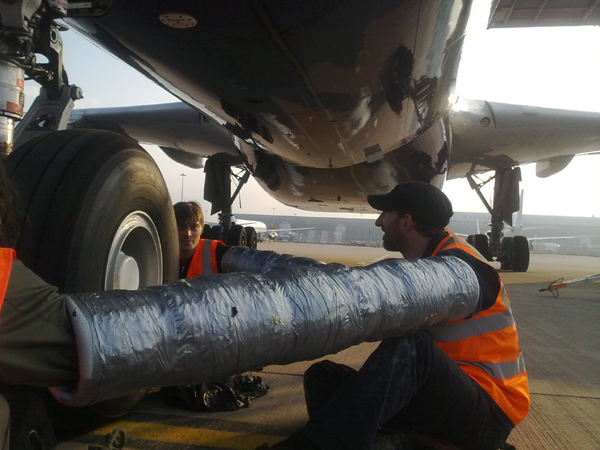 Ten people from the Tripod part of the action were arrested on Monday morning around 11am - having been there since 6.30am.

They were held for roughly 10 hours in custody. They have been charged with obstruction of the highway and bailed to appear at Trafford Magistrates court at 9.45am on Thursday 3rd June.


The six people who went airside were arrested for criminal damage, conspiracy to commit criminal damage and entering a restricted airfield. They were held for around 13 hours in custody and had their houses searched. They have not yet been charged, but bailed to return to Altrincham police station on 20th August.

Great action - well done to all!