The racist, Islamaphobic thugs and football hooligans of the EDL are planning to protest outside the East London Mosque in Whitechapel, Tower Hamlets in London E1. The EDL have rioted in Dudley, Stoke and Luton. They have attempted to riot in Harrow but were outnumbered and promised never to go back there. Keep them out of East London and oppose the EDL demonstration. 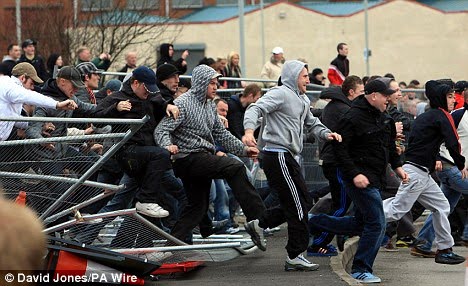 While the EDL have "peacefully" marched through London with the MFE, the protest against the mosque could attract violent protest from racists.

Turn up and defend the mosque from 10am, June 20th, 2010. Nearest tubes Aldagte, Aldgate East and Whitechapel.

Does fighting them help them?

I've just watched the disgusting expose on the Guardian site. Agreed, the EDL must be stopped but is fighting them physically the answer? Isn't that what they want? Is that the fun that gets them on the streets? If their demos were just them surrounded by police wouldn't they get bored and would the EDL not fizzle away? I don't know the right answer but they seem to enjoy the attention from the UAF and are growing and growing. These are football hooligans who fight other football hooligans. They are not going to be scared off.

I DONT BELIEVE IT


Please confirm where your information comes from as I find it hard to believe that despite the EDL being idiots they would be stupid enough to come to east London, where they would get the shit kicked out of them by the Bengali`s let alone Anti-fash. Seems like a bit of Trolling here?

The main protest is at The Troxy on Commercial Road. We are defending the MOSQUE

We are not asking that people turn up at The Troxy in Commercial Road to fight the EDL which is where the EDL will be protesting against an Islamic conference. We are worried that the EDL, BNP, NF etc might go to the Mosque in East London before, during or after the conference. We are asking that people keep an eye out for and defend the Mosque against any abuse or attack on the day.

No it's not trolling. Yes the EDL are stupid enough to do this. Defend the East London Mosque in Whitechapel from 10am. The EDL will be at The Troxy on Commercial Road from 12.30 noon.

Lets fuckin do it ay?

Lets get the red and black out on the 20th. Show these scum its more than a bunch of UAF dickheads that they will have deal with. this is anarchist territory and I would be appalled if a single 'anarchist' would think to be anywhere else. These guys are coming up with their bullshit in OUR ends and you might not buy into going out all over the country and confronting them for the sake of it but they step out in London and we need to all be there. Fuck the UAF lets get out and do it they we want, not for some bullshit agenda, there are plenty who will join us on the day.

1978 - NF march through Brick Lane. Anti-fascists oppose them. ANL (the UAF of its day) organises Carnival against Racism in Brockwell Park, South London to coincide with time of NF demo.

2010 - EDL plan demo a stone throw's from Brick Lane. Will UAF organise to be there in numbers or will it be 'celebrating diversity' several miles away?

The protest is against a conference in the troxy building. The conference will be attended by Islamic extremists. You may have read about that radical muslim that was recently allowed in, the muslim who said 9/11 was good. Well that Muslim is coming to the UK to attend that conference. I always knew you lot supported Islamic extremists, this just proved it for me.

'...fears of widespread unrest this summer.'

now where have I heard that before?

playing into their hands

kick them both out

phone the Troxy to demand they shut down the conference and keep the EDL off our streets.

This isn't a case of having to pick a side between the racists and the extremists, we should be demanding they both stay out of our neighbourhoods.

Neither are welcome, lets make them BOTH well aware of that.

soooo... what are you lot's opinion on Jihadis?

I'm going to in to the Troxy on the day, to see what they say. Any of you?

Do you even know what Jihad means?

I doubt you even know the true meaning of the word Jihad.